By Jason, Harriet & Gene Will and Lisa Niver

The Minnesota State Fair is the second largest State Fair in the United States! The Will family who were once fair booth owners themselves, shared their top food hacks with me. These six best food hacks are the iconic staples of the Fair. It is easy to get overwhelmed with hundreds of thousands of people in attendance every day and hundreds of booths with new ones appearing every year. Make sure to taste the best of the best, the must haves whether you have been at the fair year after year or you are a first timer.

In 1979, Martha Olson started her Sweet Martha chocolate chip cookie booth hoping to make $1000. She made $10,000 and now has two booths and 450 employees at the Fair. She is a former school teacher who now runs a cookie empire with 12 huge ovens that crank out 2,000 cookies a minute. Cookies are served by the cone full or the bucket full with over four dozen cookies.

Stop here for fresh corn roasted in the husk. This is the perfect summer vegetable and possibly the healthiest thing we ate all day!

Adding wild rice to a burger makes for an incredible texture and taste. One person in our group had been coming to the Fair for twenty years but today was his first time eating this fair specialty. We all give this a thumbs up! Definitely have the sautéed onions!

Come to Minnesota, you have to eat deep fried cheese curds! Over 120,000 pounds of the cheese fritters are sold and people love them!

In the Dairy building, do not worry if the line looks long, it moves rapidly and is worth any wait for the best malts on the planet. Test out chocolate or the new for 2015 Salted Caramel Puff malts. Scott Eddy and I proclaimed it fantastic!

Location: In the Dairy Building

Make one thing and make it very very well. These fries are AMAZING! Since 1973 but only at the Fair, find these fries voted “Best French Fries in America” by Gourmet Magazine.

Seven semi-trailers of potatoes (about 400,000 pounds) need 3000 gallons of oil to create twelve days of tasty treats. They use approximately 25,000 pounds of ketchup.

Location: North side of Judson Ave. between Nelson & Underwood streets 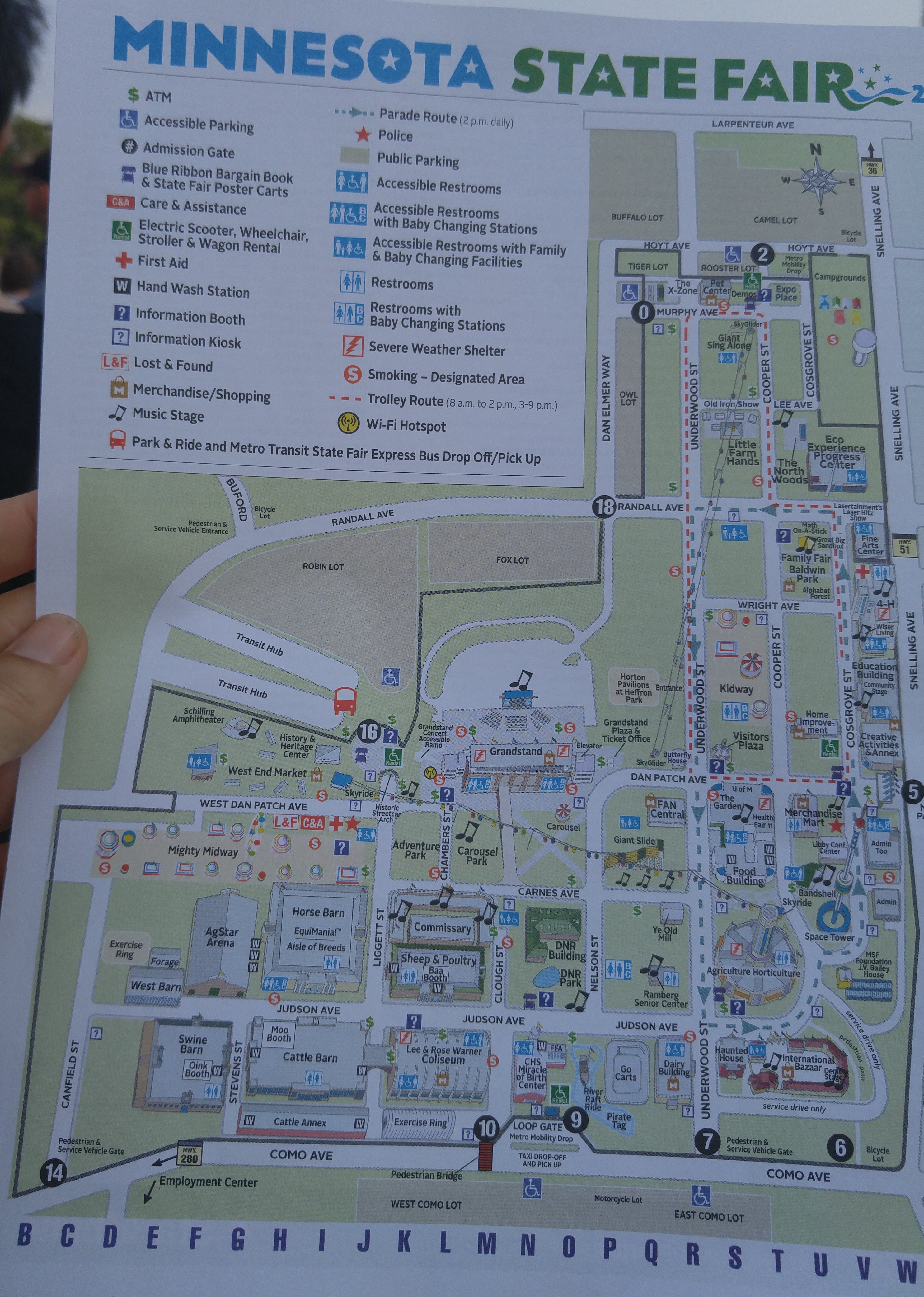 During the twelve days, more than two million people are anticipated to enjoy food, drinks and entertainment from all around the state. This fair is so large they have to have their own police presence for this twelve day annual event. There are all types of food fried and on a stick as well as concerts, live music, arts, and shopping.

The first Fair was held in 1855 in Minneapolis. Statehood was granted in 1858, and the MINNESOTA STATE AGRICULTURAL SOCIETY held its first State Fair in 1859, also in Minneapolis.  The current location began in 1885 with 210 acres and is now on 320 acres which includes the Fine Arts Center, Progress Center, Grandstand, Warner Coliseum and Agriculture Horticulture Building

• Grease from the fair is recycled and turned into biodiesel fuel.

• The fair’s recycled meat scraps go through a rendering process that separates the protein and fat. The protein is then used as an ingredient in animal feed. Fat later goes into cosmetics and soap.

• 60 tons of food waste were collected during the 2014 fair and recycled.

• More than 400 bottle-recycling receptacles were placed around the fairgrounds in 2014.

• 34 tons of glass, plastic and aluminum were collected and recycled during last year’s fair.

DoubleTree Suites by Hilton Hotel Minneapolis welcomed me with warm chocolate chip cookies and an all suite full service property. Located in downtown near the Convention Center, it was a perfect location to explore the twin cities. My spacious room had a separate sleeping and living area with comfortable seating, an ergonomic work desk and two flat-screen HDTVs. The hotel is located one block from Nicollet Mall, St. Thomas University campus and the Minneapolis skyway.

During my first visit to Minnesota, I enjoyed summer fun in the twin cities from kayaking near Boom Island with Above the Falls Sports, to Teppanyaki on Grand Avenue at Saji Ya and a day at the Minneapolis State Fair. Thank you to the Will family for welcoming me and sharing their knowledge about the Fair and Minnesota!