Sighisoara, Romania – Go Back in Time 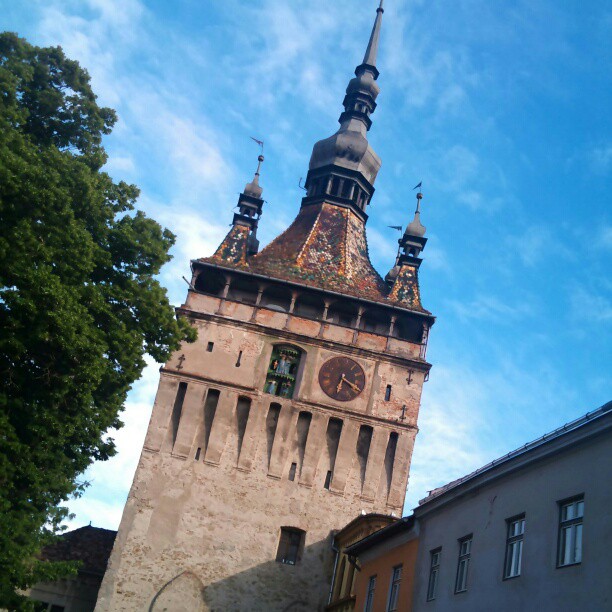 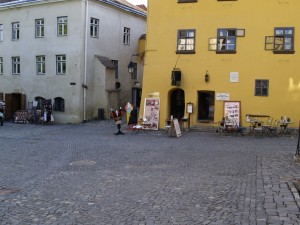 Go Back in Time for a Romantic Anniversary

My first trip to Sighisoara was also my first ever independent trip, back in 2000, when I was a freshman. I have always been fascinated by Medieval castles or citadels and I was hooked from the moment I saw the citadel from the train, approaching this tiny Romanian city.

Sighisoara, located in Transylvania, Romania, is home to the citadel of Sighisoara (12th century), a UNESCO World Heritage Site. Better known for the Medieval Festival taking place here every year in July, Sighisoara is also linked to Vlad Dracul (or Vlad the Impaler; yes, I refuse to call him Dracula, because that’s just not accurate).

Actually, Sighisoara is one of the few places which can certainly be linked to the cruel Wallachia’s ruler. His father has lived in the city right about the time when Vlad was born. Another place which is undoubtedly linked to him is Poienari Castle, high in the mountains between Transylvania and Wallachia.

Landmarks and why it’s so romantic

Ever since seeing a wedding photo shoot in a very well-known women’s magazine, I wanted to do something romantic in Sighisoara. Getting married there was impossible – one of the grooms has to have  residency in the city you get married in – and I wasn’t that crazy to ask a photographer to join us there for wedding photos.

However, I was pretty sure I wanted to get there for an anniversary. And I did : my first wedding anniversary! It was special and we were lucky to have the city to ourselves. 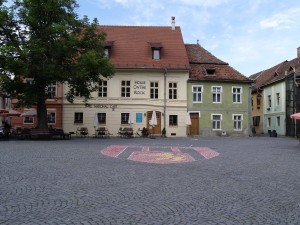 How come? Well, the main attraction in the city is the Clock Tower. Which houses a museum and also has a viewing platform. During the opening hours , the Clock Tower and the square in front of it get very crowded with tourists. Not so outside of opening hours. Unluckily – or luckily? – we arrived in Sighisoara on a Saturday past 5:30 pm and although it was late May (2013) the tower was already closed and the tourists already made their way to the cafes (which accounts for this lovely photo).

Therefore, hand in hand, we explored the citadel without a plan or a map. We just walked. I was there before three times and really, it’s hard to get lost anyway. Someway you’ll find the Clock Tower again and walk towards it.

One of my favorite places , however, is on the highest point in the city. Just take the Scholars’ Staircase all the way up to the Church on the Hill and watch the view!

How to get to

The closest airport to Sighisoara is Targu Mures Airport, currently served by quite a lot of flights (including WizzAir). An alternative airport is Sibiu Airport.

Personally, I suggest flying into Budapest and then take the train to Sighisoara.

Unless you want to spend too much money on accommodation and tackle the crowds, then it’s best to avoid the Festival (last weekend of July, every year). However , the citadel is charming during the festival and there are a lot of events going on.

The winters can be harsh but the city is just beautiful (I saw some photos and I was hooked).

So far I’ve been to Sighisoara only during early or mid-Summer but I’d certainly fancy a trip in spring. Still, weekends tend to be busiest year-round (yes, on Valentine’s , too).

Please, wear very comfortable walking shoes. The entire are is paved with cobble stone , which can get slippery when raining and can be very hard on the feet.

5 Reasons Why You Should Make Crete Your Next Holiday Stop
48 Hours in Montreal: Top 8 Things to do, Via FlightHub
Zambia: Walking Safaris are Good for the Soul
Tasting Irish Whiskey in Dublin's Jasmine Bar

2 responses to “Sighisoara, Romania – Go Back in Time”