Are you ready for a WIDE OPEN WORLD? 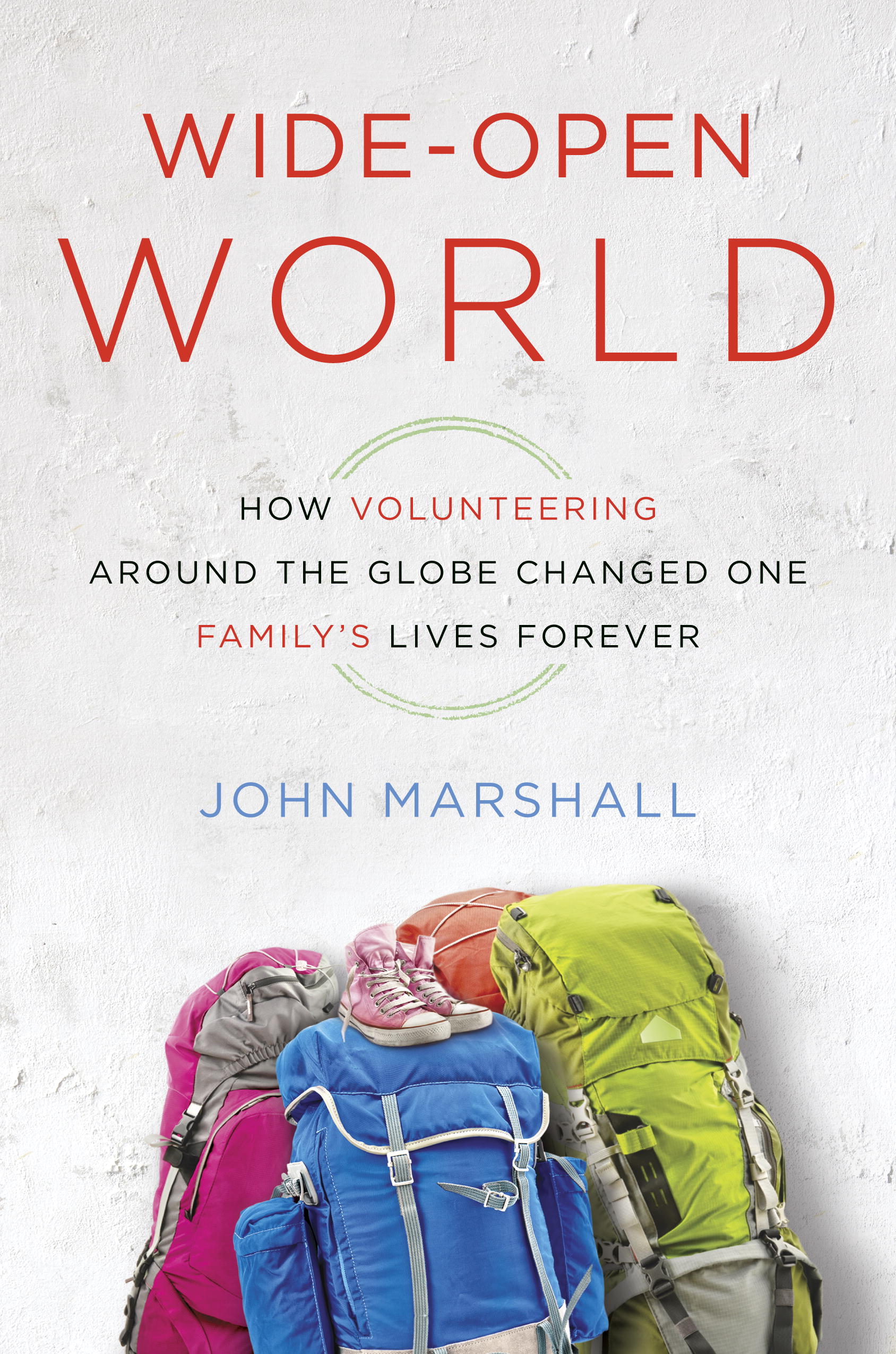 From inside the Human Kitchen, I watched the spider monkeys begin to arrive. They don’t look so tough—or so I told myself as they climbed onto the bars that separated me from them. They were docile, for one thing, hanging out like bored visitors at a human zoo, not baring their teeth or trying to get in. One, two, then three monkeys; they all just scratched their red belly hair with their long black fingers, searched for the right grip with their wandering prehensile tails, looked at us—at me—with their black unfathomable eyes, and waited. Soaking wet and full grown, spider monkeys weigh around fifteen pounds, but they have ten times more muscle mass per body weight than your average human, which makes them incredibly strong. A spider monkey, hanging only by her tail, can pick up a sixty-pound bag of ice and swing it playfully around like a loaf of bread. One monkey at the sanctuary even broke into a bathroom, ripped a ninety-pound toilet off its bolts, and threw it out the door! Plus they have sharp teeth and lightning-quick reflexes, and they can be unpredictable and territorial and jealous. Especially with guys like me.

Several months before we left home, before we bought our tickets to Costa Rica, I received an email warning. Carol, one of the sanctuary founders, was writing with some advice about volunteering. Along with suggestions on what to bring and descriptions of what we would be doing, she slipped in a couple of lines that caught me by surprise. She wrote, and I quote:

Sweetie is growing out of her propensity to attack white males, but Winkie seems to be the culprit now. John: there are a few special guidelines that you will have to follow until they realize you are not a threat to The Troop. 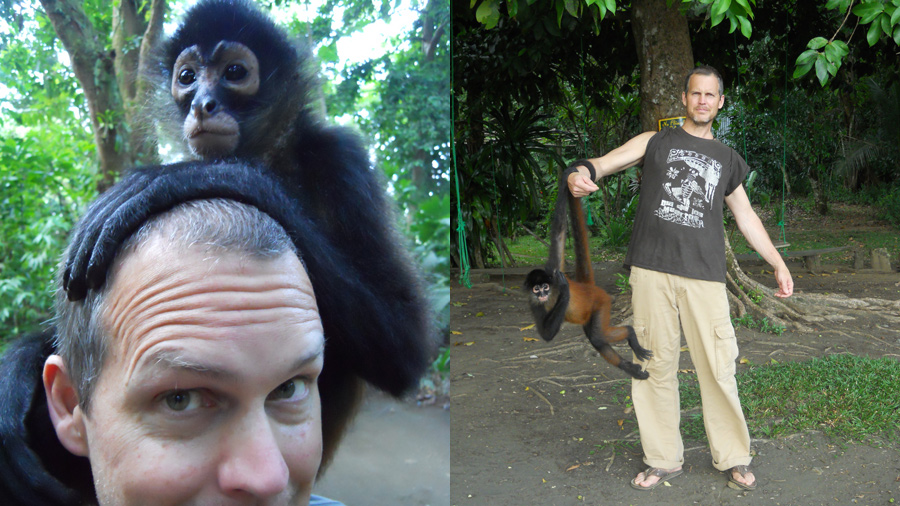 Now, several words jumped out at me right away, the first being “attack,” the second being “white,” and the third being “male,” two of which describe me pretty well. My wife, Traca (pronounced tray-sa), laughed the warning off, as white women on the non-attack list are prone to do, but I was a little freaked out. It didn’t help that I received this email right after seeing the interview Oprah Winfrey did with Charla Nash (the woman who had her face chewed off by a chimpanzee in 2009); and though I knew spider monkeys are much smaller than chimps (especially the two-hundred-pound male chimp that got Charla), I suspected they were still capable of peeling me like a big white male banana should the desire arise.

As I watched the monkeys at the window, wondering which one was Sweetie and which one was Winkie (or whether it mattered), I noticed two scarlet macaws fly from above the Human Kitchen, screeching like show-offs, as if their spectacular red and blue plumage wasn’t attention-grabbing enough. They soared across the grounds, through the dense jungle growth, landing together in a palm tree that curved out across the Golfo Dulce. Beside me, Traca looked awestruck, as if witnessing a miracle, and our two kids—Logan, our seventeen-year-old son, and Jackson, our fourteen-year-old daughter—were as focused as I’ve ever seen them. If they were still harboring any reservations about this trip, they weren’t letting on. They looked enchanted, alive, overloaded by the sheer density of wildlife, the potential for danger, and the pure novelty that surrounded us all.

Our home for the next month would be the Osa Wildlife Sanctuary, a little orphanage/rehab center for all kinds of abandoned or injured rainforest animals. Creatures like kinkajous, peccaries, coatis, tayras . . . though I was focused strictly on the spider monkeys. While all the other sanctuary residents were being cared for in cages, the spider monkeys were the only animals allowed to roam free. Which meant one very critical thing for me and my family: For the next thirty days, we would be living in cages. Whenever we stepped outside, we’d just be part of the monkey troop.

“Well, let’s see how this goes,” Carol barked in her usual forceful voice. She reached for the security latch on the kitchen door, then turned to me. “Just don’t show any fear or it’s all over,” she warned, clearly not paying attention.

Short of holding an i am afraid sign, I’m not sure how I could have exhibited any more fear signals than I was exhibiting at that moment. I was sweating liquid fear. My legs were weak. My heart was racing like a rabbit’s heart in Coyote Canyon. I knew this sensation. When I was a kid, I had an irrational fear of dogs; not just big scary dogs but all dogs. Even friendly golden retrievers could get my blood pumping in a panic, and as Carol opened the door, I had that same reaction: pure, instinctual fear.

“You okay, Dad?” Logan asked me, a white male himself but, according to Carol, too young to be perceived as a threat by the monkeys.

“They’re not going to attack you,” Jackson said, rolling her eyes as if she was annoyed. But I could tell she was a little worried, too.

Then, right before we stepped outside, I caught Traca’s eye. She flashed a big excited smile and I knew exactly what it meant. This was her dream. She’d wanted to take a trip like this ever since we first met, and now here we were, at the threshold of our first big adventure. 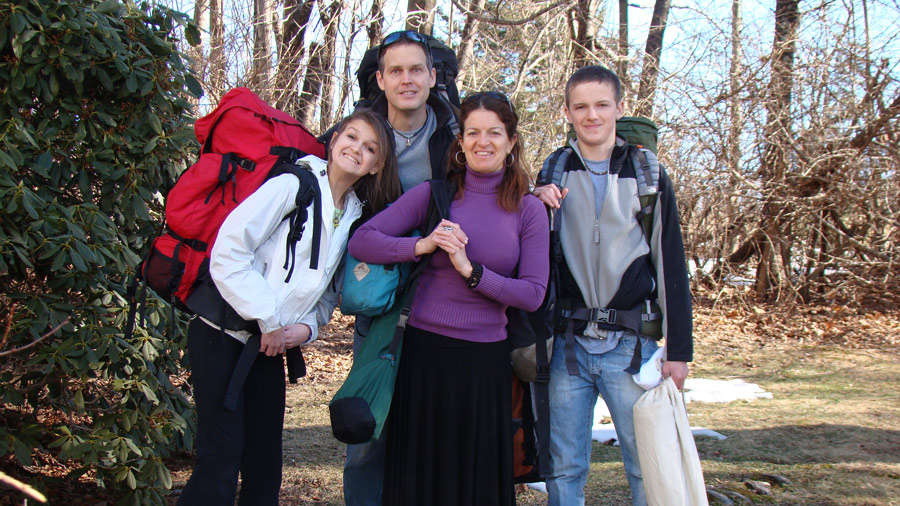 Leaving the safety of the Human Kitchen, I felt unprotected, but I wasn’t—not really. Surrounding me like bodyguards, moving as a single unit, was my family: my wife of nearly twenty years, my son, and my daughter. I knew that we wouldn’t always be together, that life and change would pull us inevitably apart. But as Sweetie (or was it Winkie?) casually dropped from the cage bars and made her way toward us, toward me, there was no future. There was only this moment, the whole world narrowing to a single small, hairy shape. No matter what happened next, one thought stood out in my mind like a red macaw against a blue tropical sky:

After years of talking about it, we’re actually doing it.

Cruising in 2012: Free Will at Sea, But What About Free Wi-Fi?t
An Ancient Craft Undergoes a Revival
USA: To spend a night in Reno
Did Lisa Niver love Expedition Kirkwood Women's Clinic?

One response to “Are you ready for a WIDE OPEN WORLD?”