Siem Reap, Cambodia – An Unexpected Evening at a Pagoda 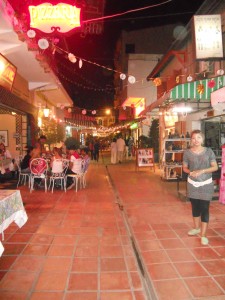 What better way to immerse yourself in Southeast Asian culture than to attend a “chat and meditation” service with monks? I quickly cycled down the muddy dirt road, drenched by the monsoon storm passing through. I hopped off my bike and ran for cover into Karavansara Retreat – a large traditional wooden Khmer house with an attached guest residence. The frame of the house reflects Cambodian antiquity; yet refurbished updates to the interior, including red mood lighting, remind us we are in modern-day Asia. I ran up the stairs which lead to a veranda and a single room that contains not much else other than wooden beams, palm leaf fans, and pillows to sit on. I slipped off my flip-flops at the entrance and joined my colleague and another woman. The storm still pounding outside was a welcomed juxtaposition to the stillness and peacefulness within the wooden walls; our temporary sanctuary for the next two hours. Four monks filed in wrapped up in traditional robes; each a different color of burnt orange, light orange, deep red, and muted yellow. They sat down opposite us. We greet them as per custom, bowing three times and offering a beverage to each.

The “chat” portion lasts an hour and a half and consists of learning the intricacies of Theravada Buddhism and general conversation about life. No subject is off limits. Topics range from “suffering” to “extremism” to “materialism.” One woman asked why the colors of their robes are different to which one monk replied, “Matches skin color.” An evasive answer from which I gathered three possibilities: 1. Monks are not only wise, but humorous 2. Monks are more fashion conscious than I previously realized and 3. Even monks like to maintain a bit of mystery. I respect all three possibilities. 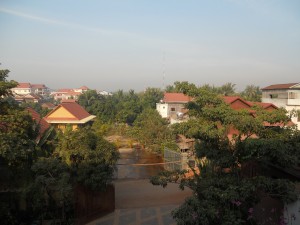 Maybe it’s the uniqueness of learning the wisdom of the ages in true traditional Southeast Asian style, or maybe it’s the mystique behind the color of their robes, but the experience is awe-inspiring.  The session closes out with a half hour of meditation. At this point my body is far from being used to sitting on flat pillows and various extremities are in pain/falling asleep. The gentle lull into a meditative state had me almost completely forgetting about any bodily issue, or worldly issue for that matter. The monks chant in soft synchronicity, sometimes in “Om” sounds and other times with Sanskrit versus that throw you into a trance. THIS is what true meditation is, and I could probably never reduplicate this meditative state in my living room. As the session closes out and the monks accept our monetary donations, we are informed that one of the monks has just come in from Burma and is teaching a Buddhism class at a nearby pagoda. The monk from Burma asked if we would be interested in attending his class. My co-worker and I responded in the affirmative. He was pleased and said the class starts in twenty minutes and asked us if that was okay. How could we say ‘No’?

So, there we were, two western girls with four Eastern monks headed off at dusk to a pagoda for another two hours of Theravada Buddhism. A tuk tuk dropped us off at the gates of the pagoda. The monks guided us to an old and beautiful one-room building which housed a whiteboard and four rows of tables and chairs. We sat down surrounded by eight traditionally dressed monks and our new monk friend leading the class. I had to take a moment and ask myself, “Is this my life?” 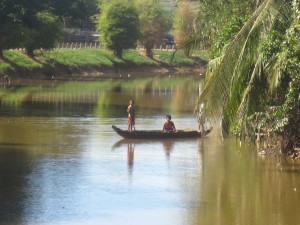 Our teacher was about halfway through explaining the Four Nobel Truths when he rested his hand on his chair and let out a gentle but unnerving scream. “What?!?” we exclaimed. He replies, “Snake!” A few short feet away from our desk was a drop-in student, a baby snake resting upon our teacher’s chair. My co-worker asked if he would like her to remove the chair. The teacher replied, “No, leave snake.” The rest of the time I had one eye on the whiteboard and the other on the snake. But the snake never moved, he was content where he was and Buddhist monks were not about to disturb nature, this was his home and we were merely visitors. These are the rules at a pagoda in Cambodia. Certainly different to the rules I was used to where I came from, but practicing another culture’s rules was a lesson learned beyond the teachings of Theravada Buddhism.

The evening was a brilliant reminder of one of my favorite aspects of Cambodia; that travelers can find experiences as rare, mystical, and culturally-rich on a small side street as they can at the magnificent temples of Angkor.

New Hampshire: Fully Alive in the Dead of Winter
48 Hours in Portland
The Day I Got Soaked in the Tent...in Budapest
Couchsurfing in Venezuela, The Kidnap-Capital of the World

Jillian’s first travel experience began when she was 10 months old, flying from her home in Los Angeles to spend the summer with family in Connecticut. However, it wasn’t until her college graduation trip to Israel and Greece that she truly appreciated travel and learned how big and small the world really is. After a brief stint in advertising, her travel cravings got the best of her and she traveled to Australia and New Zealand. Six months later she packed her bags and moved to Australia for a year and a half to get her master’s degree. During her time at university she traveled around Southeast Asia and decided to move to Cambodia and conduct research there to complete her master’s. She currently resides in Los Angeles… for now.

4 responses to “Siem Reap, Cambodia – An Unexpected Evening at a Pagoda”