On The Move In The Galapagos

I feel a special affinity for the giant tortoises of the Galapagos. Like me, they are large and slow. Unlike me they are green, a hue I only achieve when I’ve had too much to eat or drink. They also live a very long time, well over 100 years on the average. Maybe that’s the trade-off –- move slowly, live long. I can only hope.

I met the tortoises, plus a bunch of other animals, many unique to the islands, on a recent land-based, multi-sport adventure run by Adventure Life, my hosts on this trip. Unlike the more familiar and popular ship-based tour, this trip was active, very active. If we weren’t hiking, we were kayaking. If not kayaking, then biking. Plus lots of snorkeling. To paraphrase a bit from Woody Allen’s movie Annie Hall, my wife and I — true geezers at ages 69 and 72 — believe that like the sharks of the Galapagos, we would sink to the bottom of the ocean and die if we ever stop moving.

The activity was great, but the animals are still the main attraction in the Galapagos. Among my other favorites were the sea lions, which swam alongside our kayaks on a morning paddle along the coast of San Cristobal Island, our first stop on the trip. Alfredo, our guide, said that they were attracted by the colorful kayaks; I think that they mistook me for one of their own — large, mustached and grey.

We also saw lots of birds — gulls, frigates, boobies, finches, pelicans and herons — and iguanas, some of the most bizarre-looking creatures I have ever seen. 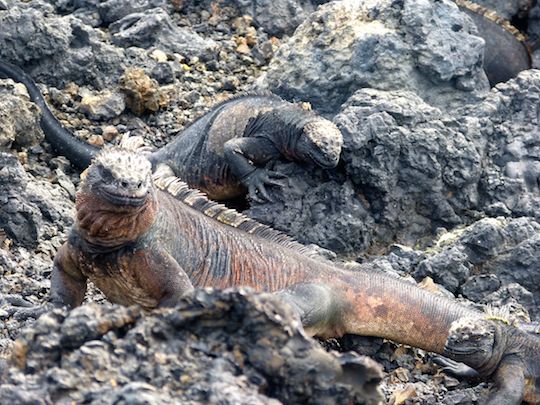 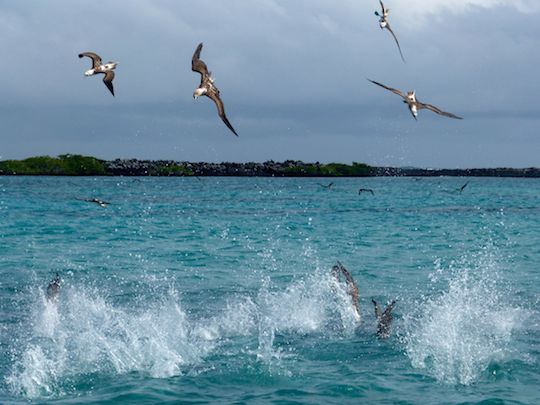 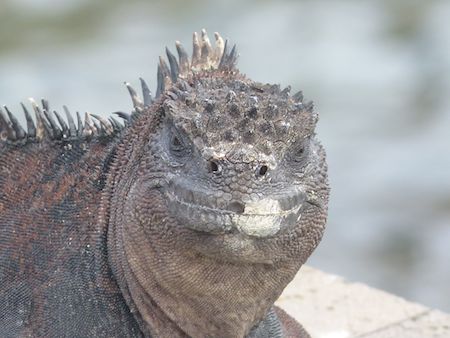 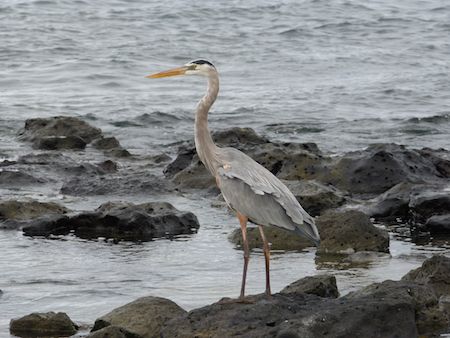 The best snorkeling of our trip was at Kicker Rock, a 400′ high spire of sedimentary rock jutting out of the ocean a couple of miles off shore. The rock is split in two, creating a narrow channel between steep walls of rock that extend about 60’ below the water. 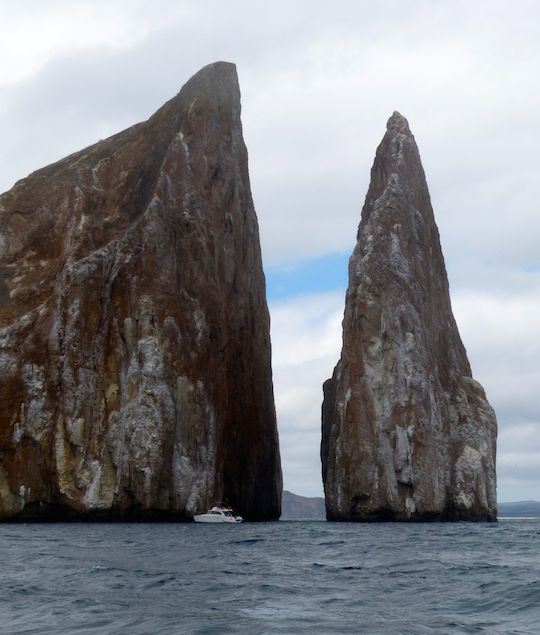 As we snorkeled through the channel the eerie dark canyon beneath me evoked foreboding images of horror movies yet to be filmed. Sharks, sea turtles, and lots of big fish swam past or lurked beneath. Sea lions whizzed by within a foot of my nose. Snorkeling will never be the same after this. 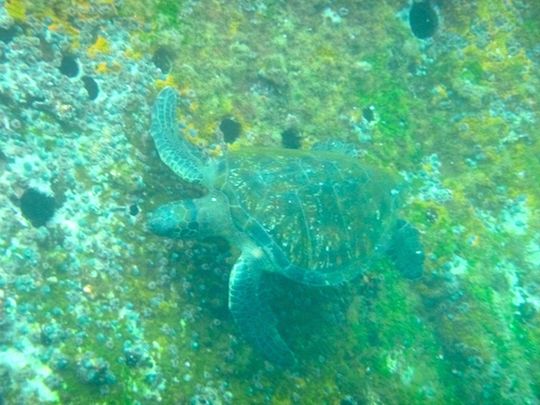 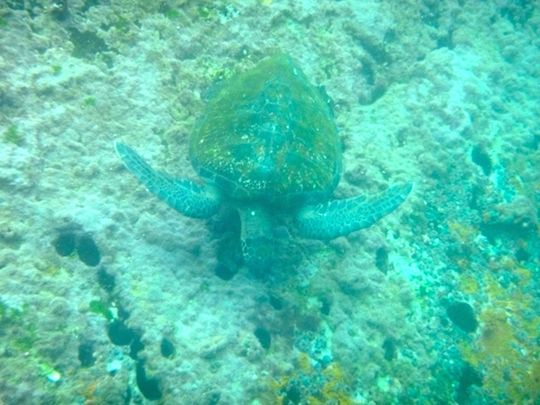 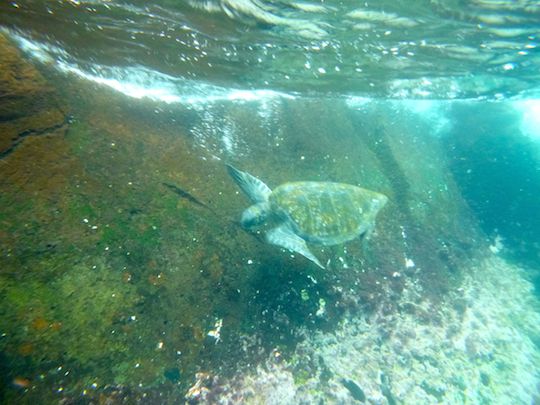 We also hiked and biked on our six-day adventure. One hike, on San Cristobal, took us up to and around a lake in the caldera of a volcano. The flora and atmosphere in the highlands is quite different than it is by the sea. The islands are mostly desert — very dry with lots of cactus and sparse vegetation — but the highlands are in the clouds, so the vegetation is greener, more dense and lush. The hike around the lake on a mud-slicked trail was like a walk through the moors of Scotland. The low brush looked like heather, and the trail was shrouded in mist the entire way.

Another hike, this one on Isabela Island, took us to the rim of Sierra Negra, the second largest active caldera in the world, five miles across at its widest point. This ten mile round trip hike had a little bit of everything – a seriously muddy uphill trail for the first mile, a fog shrouded hike along the rim, a spectacular view into and across the huge caldera when the fog lifted, and a sunny hike across a lava field to a sweeping view of the ocean from the turnaround point at the end of the trail.

Our bike excursion was also on Isabela Island, a three hour round trip ride to the Wall of Tears, built by prisoners by hand and stone by stone in a penal colony on the island in the 1940s. Now, I don’t mean any disrespect for the prisoners who suffered and died building this wall, but the tears on this ride were all mine, at least metaphorically. The road to the Wall of Tears is mostly gravel and sand with many rises and dips. For a cycling amateur like me, it was a real challenge. In any case I made it, but only after a lot of sweating, burning thighs, aching knees and a nether region rendered numb from the hard seat.

The day ended with happy hour at a beach bar about 100 yards from the hotel. This gave me an opportunity to observe the mating rituals of another Galapagos animal, though one not unique to these islands. Post adolescent humans displayed their plumage and cleavage and demonstrated their fitness for procreation by playing beach volleyball. No doubt, the double shots of happy hour tequila sharpened my observational skills.

The highlights of Santa Cruz Island, the last island we visited, were the El Chato Tortoise Reserve and the Charles Darwin Research Center. At El Chato, the natural habitat of the largest species of tortoise in the Galapagos, we walked for over an hour among these fantastic animals, often up close and eye-to-eye. 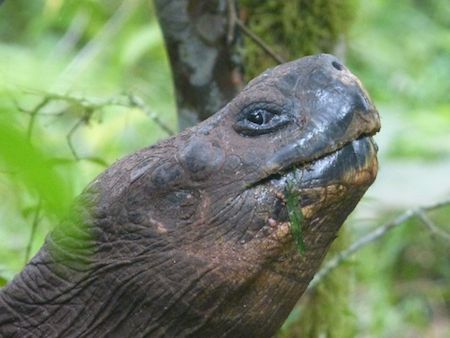 The Research Center was impressive for what it represents as well as for its exhibits. It is a tribute to the scientist who changed our world. In effect, the islands, its people and institutions have turned Darwin into a national hero. In this era of celebrity worship, anti-intellectualism and political dumbing down, its great to see a scientist treated with as much reverence as a rock star. 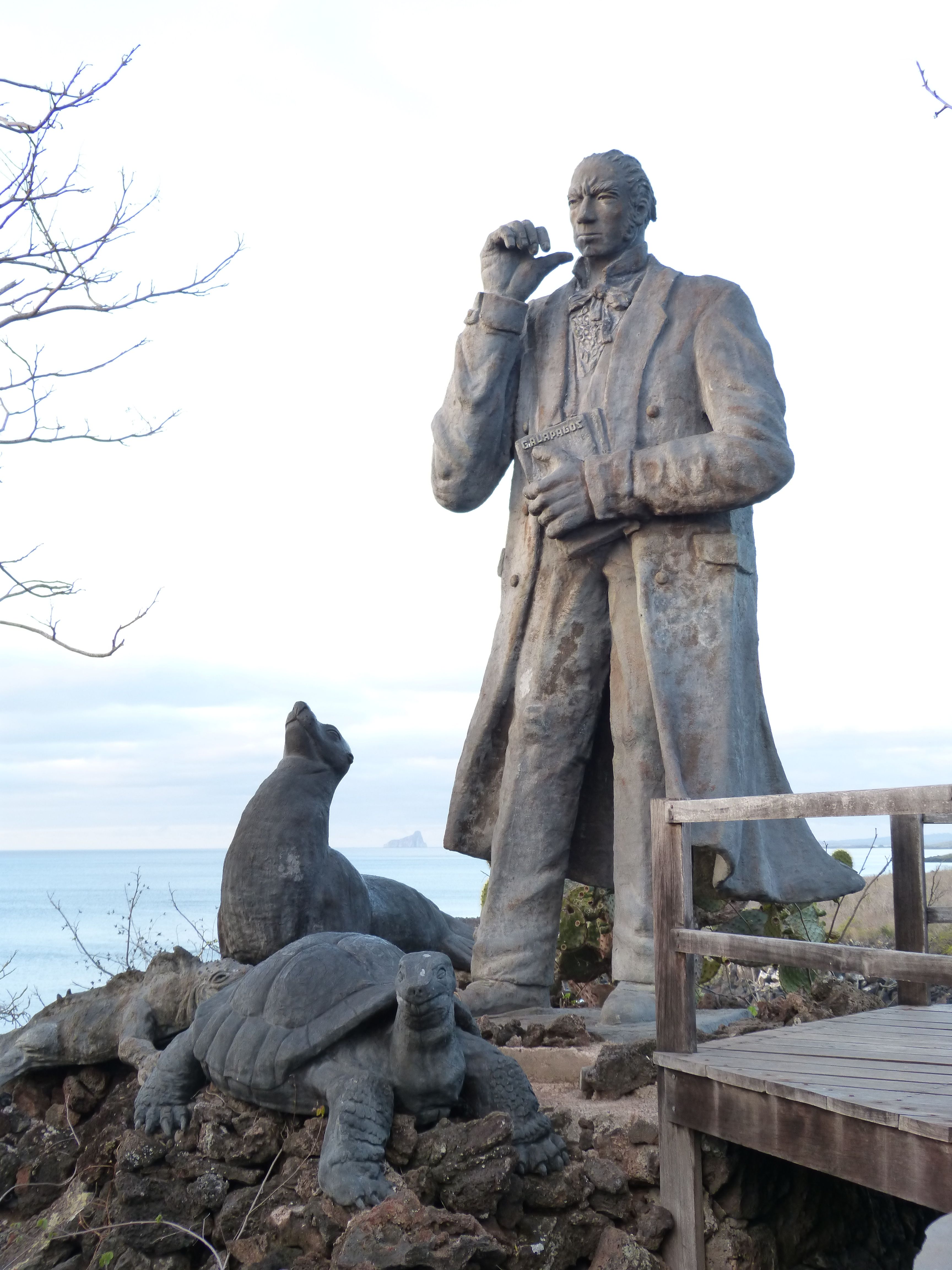 We can learn a lot from the Galapagos, and not just about the evolution of the blue-footed booby.