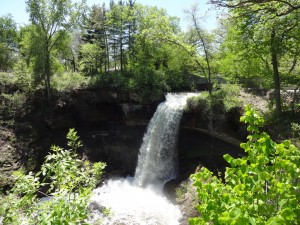 My eyes flicked toward the trees as a blur of bright yellow flew past. That look away was enough for me to fishtail through the sandy road. I hopped off my bike to collect myself and to pull out my field guide. Not all birds are yellow, but that blur of yellow was not enough for me to identify which bird it might be. I put the guide away and pushed onward, toward the falls. I still had miles to go and already the sun, just beginning to reach above the trees, was adding weight to the air.

A bit of a daydreamer, as I type my own words, I can picture myself forging my way toward Angel Falls in Venezuela or Victoria Falls in Zimbabwe. I haven’t been to either of them, but they’re on my list. Instead, I was in fact a mere few blocks from home – in Minneapolis.

My travel budget is nil – for now anyway. That happens from time to time. I used to feel caged when there was no money to hit the road. I’m not the type just to wing it, whether that means hoping to land a job once “there” or to bum a couch for the night. So instead, my mind would pace in frustration, feeling the world was off limits until I could scrape together the resources to set off again.

I would probably still be that way if I hadn’t panicked before moving from Seattle in 2008. As the house was getting packed up, I realized once again, I was moving from a city, as though it were merely a rest stop, without having fully explored it. I was furious with myself. I had spent tidy sums over the years traveling to other cities and countries to see the very things I had been living amidst – for the previous ten years! 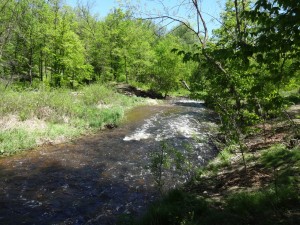 Before moving, I tried to cram a city and its mountains into two weekends. “Never again!” I vowed dramatically, although no one was there to witness, which was perhaps for the best as I wasn’t standing atop a mountain but scrubbing the stove top in the hopes of getting my rental deposit back.

This particular day in Minnesota as a blur of yellow flew past me, I was headed toward Minnehaha Falls. When I moved back to my home state of Minnesota in the fall of 2012, after a few decades away, I came to the “falls” to discover the creek had dried up. This time, still early in the summer and fresh from a storm, the falls were flowing fast.

I had ridden my bike ten miles to get to the falls, and after a few minutes at the base of the falls, I was about to head the fifty or so feet back up to the bike trail, when I realized a hiking path continued east along the creek. There was more to explore!

As I hiked along the path, I was surprised by the sense of wilderness that overcame me. The trail from the falls extends only a quarter mile or so, and I know the map of the city well enough to know the creek empties into the Mississippi River, but to see for myself this small creek open up to the Mississippi River was a sight to behold. That moment is why I travel – to experience the world first-hand: to be awed, surprised, awakened.

At the confluence of the Mississippi River and Minnehaha Creek, unlike the wide floodplain of most of the river, there is a gorge, the only true gorge along the Mississippi River. Trees, rising from the banks to the cliff tops, hide the city. Only when I finally looked north toward the locks was I reminded that I was still in the city. Otherwise it was the power of nature that stood before me. 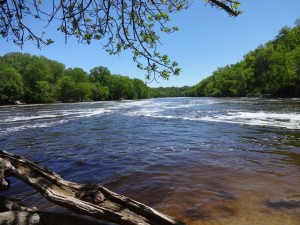 Watching the mighty river flow past, I felt myself soar, limits replaced with possibilities. Just miles from home, I got that sense of freedom I feel whenever I’m off exploring and discovering. I used to consider where I lived to be a rest stop until the next adventure – stupidly leaving my own home unexplored.

As I walked back toward the Minnehaha Falls, I wanted more than ever to see the falls of Venezuela and Zimbabwe, but the Mississippi River was no mere rest stop. My home was begging me to live, to explore, not to wait for two weeks of vacation, but to be free every day.

About the Author: Patrick McGraw is a freelance editor and writer, who has returned to his home state of Minnesota after living in Boston, Seattle, Las Vegas and Portland, Oregon. Read more of his explorations.

P.O.P.S. the Club with Tim Allen October 16
Hollywood: Your Home Away from Home Part 1
Thank you KTLA and Los Angeles Press Club! Awards 2019
Realize Your Dreams!

One response to “Minneapolis: The Mighty Mississippi River”