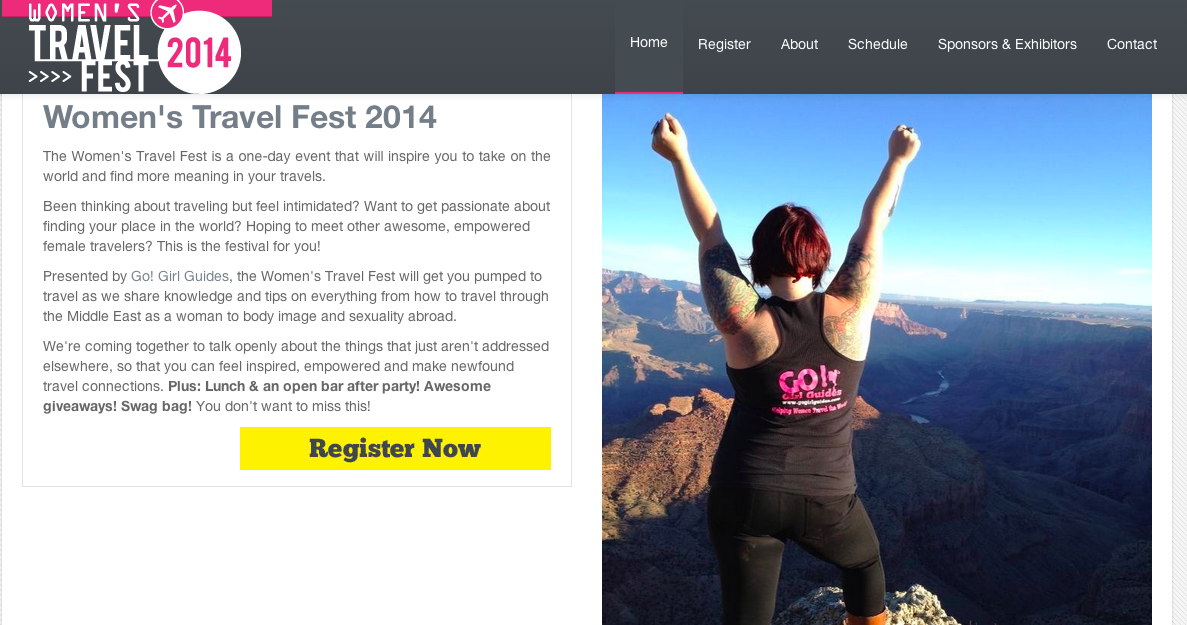 The Women’s Travel Fest is a one-day event on International Women’s Day March 8, 2014 that will inspire you to take on the world and find more meaning in your travels.

Been thinking about traveling but feel intimidated? Want to get passionate about finding your place in the world? Hoping to meet other awesome, empowered female travelers? This is the festival for you!

Presented by Go! Girl Guides, the Women’s Travel Fest will get you pumped to travel as we share knowledge and tips on everything from how to travel through the Middle East as a woman to body image and sexuality abroad. We’re coming together to talk openly about the things that just aren’t addressed elsewhere, so that you can feel inspired, empowered and make newfound travel connections.  Samantha Brown and many other exciting speakers are on the schedule. Who do you want to meet?

How did this get started?

The Women’s Travel Fest is a one-day event that aims to inspire & empower women to travel the world, and help them make newfound travel connections.

The idea was born in 2011 while founder Kelly Lewis was on a press trip in Thailand along with Jerri Stephenson of Do It While You’re Young. Both women’s travel writers, the two started wondering why a festival like this had never been done, but it wasn’t until 2013, after Kelly had completed a successful cross-country book tour, that the wheels began turning.

While on tour, Kelly connected with women of all ages (from 12-82!) who were in different phases of life but were equally as interested in finding out more about traveling safely. She heard the same thing over and over again, “I want to travel, but…” and as she worked her way across the country, the inspiration and energy that came from these discussions gave her goosebumps.

After she moved to NYC and met Mickela Mallozzi and Masha Vapnitchnaia, the three recognized it was time to do this on a bigger scale, and thus, the Women’s Travel Fest was born. We are so excited for the first-ever Women’s Travel Festival, and the support and energy we’re already receiving reaffirms to us that this event will be truly magical. We can’t wait to see you there! Originally from Hawaii, Kelly is the founder of Go! Girl Guides, which publishes the world’s first series of travel guidebooks made just for women. The company was created in early 2011 and is dedicated to helping women travel the world safely and affordably. Go! Girl Guides has published titles on Thailand, Mexico, Argentina and London, with titles on NYC and Costa Rica forth-coming. Originally the assistant to one of the world’s most famous metal rock bands (Slipknot), Mickela quit her job to start a journey around the world, taking her camera with her to follow dance in the lives of everyday people wherever she went. She is the host and producer of Bare Feet™ , a travel/dance web series where she ‘experiences the world, one dance at a time.’  She is a classically trained dancer as well as a trained musician and is very much inspired by folk dances from around the globe. Mickela and the Bare Feet™ web series have been featured in The New York Times, Dance Magazine, Yahoo! Travel, Travel + Escape, American Express, AFAR Media, Matador, Expedia, Travelocity and more!  She has performed on various television shows including Sesame Street, The Doctor Oz Show, TBS’s Movie and a Makeover, and she has performed in prestigious venues such as Central Park’s Summer Stage and the Kaufmann Concert Hall. Born in the USSR, raised in the Bronx, educated on three continents in three languages, Masha often struggles with her identity and her plane fare. Her love of Indian folk dancing, Buddhist temples in Tibet and Amok curries in Cambodia have further complicated the issue. Currently, she is preparing for a year of walking pilgrimages around the world covering no less than 5,000 miles. Her feet will leave their mark in Tanzania, follow in the footsteps of Alexander the Great in Turkey, walk around Mt. Kailash in Tibet, enter 88 temples in Japan and trek to Machu Picchu in Peru. In addition, she hopes to find herself walking in France, Palestine, India, Antarctica, and in Spain for one more month-long stroll along the Camino de Santiago. Follow her as she makes her way at unlikelypilgrim.com

Get Your Early Bird Tickets now until Dec 31st!

The Bachelorette Falls in Love in Dublin
What Did We Do In London? Part One The Rubens At The Palace
"TELL ME MORE ABOUT" Walking with Polar Bears
BEST ROAD TRIP EVER: 2021 Genesis G80 3.5T Prestige