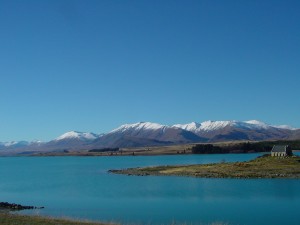 I was in familiar territory. In the words of our bus driver who was playing tour guide, on my left was low grass while much farther on my right was Mount Cook, New Zealand’s tallest mountain. “Now isn’t that a lovely view, ladies and gentlemen?” he asked over his microphone. Yes it is, I thought.

We entered a fork in the road and came to a small town. All along the main street were the usual – a general store, a bakery, restaurants and cafés.

The bus stopped and our driver turned to us. “All right, this is Tekapo. We’re stopping here for a while then it’s off to the lake but if anyone wants to walk there, I’ll see you in fifteen minutes.” I left in a flash.

I had first come to New Zealand when I was twelve. My parents packed my brothers and I into a plane and upon landing at Christchurch, rented a bright yellow Mazda 323 and drove us all over the country. For that reason alone, I thought my parents were the coolest old people around. They still are.

It was late afternoon when we arrived at Lake Tekapo back then. We were headed for Mount Cook when my father, who had been driving for hours, took that same fork in the road. “There’s a very nice lake here where we can stop for a while,” he said.

This ‘very nice lake’ had the most crystal clear water I had ever seen. It took my breath away. My twelve-year-old eyes had never seen such beauty- the way the sunlight reflected on the surface and how turquoise blue the water was. And beyond this lake, far away, was a row of mountains, their peaks covered in snow.

There was a sort of ledge nearby so I sat down after a while. I noticed a small stone house and a statue of a dog but had no idea what they were. I don’t remember how long we stayed there but it seemed like ages. A child doesn’t need to worry about time.

“We have to go,” my mum finally called. “We don’t want to reach Mount Cook too late, it can get really cold there.” And so we left.

I was still thinking of the lake when we reached Mount Cook. In our freezing motel that night, I asked my dad for his guidebook and read about the area.

I learnt that we were in a region called the Mackenzie Country, named after a sheep rustler called James Mackenzie. The statue was a tribute to the loyal sheepdogs that had helped shepherds in the area. The stone hut was the Church of the Good Shepherd and was built in 1935. And of course there was the lake itself. I saw a photo of Lake Tekapo and knew I had to go back one day.

And this was where I was headed, eighteen years later.

I had scrambled out of the bus as soon as our driver said we could get to the lake on foot. Fifteen minutes. Is that long enough? I thought, tripping over my feet.

The road towards the lake went up a slope. There were yellow and purple wildflowers growing on both sides and I stopped to pick some for my mother, who presses flowers in her books. I hurried on. It shouldn’t be too far now.

Then the road disappeared and a familiar blue hit my eyes. The surface of Lake Tekapo, which I now knew was covered with fine rock dust carved by glaciers in the Alps, sparkled in the afternoon sun. The water was as blue as I remembered it. My heart soared and suddenly I was no longer the adult who had quit her job to travel. I was twelve again.

When our bus left Queenstown that morning, I had wondered whether my memory of the lake was accurate or if my childish brain had simply been high from being on holiday. I still have the notebook I wrote all those years ago and under ‘Lake Tekapo’ was: ‘Oh wow it was really cool! The view was so beautiful!!!’ That was all I had written.

But my memory of the place had been accurate. I hadn’t been very eloquent, but maybe eloquence was unnecessary.

A familiar sound reached my ears. It was our bus rumbling up the slope.

The bus stopped by the lake for less than ten minutes, just enough time for us to pose and take photographs.

As he drove away from Lake Tekapo, our bus driver said: “Now wasn’t that lovely, ladies and gentlemen?”

About the Author: Anis Ibrahim is a freelance writer from Kuala Lumpur, Malaysia. She worked as a journalist for nine years and has a regular travel column in the New Sunday Times. Follow her on her blog, Five Feet Flat or on Twitter: @AnisIbrahim