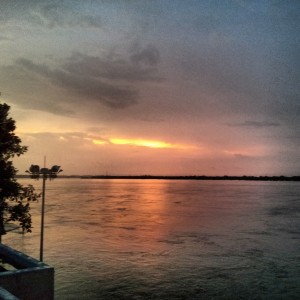 The sea of saffron edged along slowly on hundreds of bare feet on the rain-drenched path. Mud caked the heels, splattered the ankles. Occasionally, a cry of “Har Har Mahadev” erupted from one trembling throat and got carried over to others like a wave, until it rose in a crescendo. And fell. To the muffled whisper of shuffling feet on wet earth. In the soft early morning sun, rain drops glistened on brown bodies.

“You go to the temple regularly, no?” Mother asked her customary question. “Yes Maa, I do,” I gave my practiced answer. It had been a while, a few years, since I had stepped inside a place of worship with religious intent. When I did, it was to admire the architecture or to observe people at pray. I hadn’t traversed the distance to atheism yet, but my belief was definitely dwindling.

The sea of saffron reached a white domed structure, paused. “Har Har Mahadev” rang once again, this time with arms outstretched skywards. “Finally,” I thought with relief. Somewhere in the sea of saffron, a bright blue speck that was I was having a tough time trudging along with the Lord Shiva devotees. Brown body against brown body. Muddy feet against muddy feet. I had halted several times to wash off the mud, dung, slime from my pedicured feet with bottled water. My bottle was confiscated at the entry gate by the uniformed policewoman. So were my chewing gums.

“I want to go to Banaras. Will you come with me?” Mother had meekly asked. On any other occasion, I would have replied a curt no. But this was Banaras. Varanasi. Kashi. The oldest city in India, and one of the oldest in the world. This was Banaras of the hundred ghaats along the holy river Ganges. The Banaras that thousands of tourists from all over the world throng to every year. “Sure” I replied. Mother was pleased.

The sea of saffron moved again, past the white domed structure. “Wait, isn’t this the temple?” I wondered. Confused, I looked up at the white dome, the minarets and up at the crescent perched on the dome. It was a mosque! A mosque so close to a temple! That was a rare sight in this secular democracy, torn apart so many times by communal differences. Few paces past the white mosque, the golden dome and the golden spire of the Kashi Vishwanath Temple came into view, shining blinding bright. The temple and the mosque, the mosque and the temple, together, sharing the same wall. I smiled.

The 4 o’clock alarm went off before I had even shut my eyes. I lay in bed and recalled the happenings of the previous day. The uneventful train ride from Delhi. The Varanasi Junction railway station flooded with saffron-clad Shiva devotees, who had travelled from all over India on pilgrimage. The half hour-long panicked wandering through lanes after narrow lanes of Old Banaras in order to find the hotel I had booked over the Internet. The first glimpse of river Ganges flowing majestically below the hotel. The smile the little boy passed me, his eyes twinkling, as he playfully dived into the river. The enthralling Ganga aarti in the evening, where seven young priests performed a practiced recital of making offerings to the holy river.

The snoozing alarm went off again. I got up, bathed, dressed in bright blue and stepped out into a dazzling sunrise over the Ganges. Humbled, captivated, I sighed. And commenced my walk to the Kashi Vishwanath Temple.

The sea of saffron disintegrated inside the temple courtyard. A priest hurried over to us and offered to take us through the rituals. We sat cross-legged on the damp marble floor of one of the halls adjoining the main shrine. The priest placed a large plate in front of us, with flowers, leaves, this and that. The rituals began. I folded my palms together, closed my eyes, and dozed off. I had been aiming to catch up on my sleep. Instead, I drifted off into a subconscious state of being, of trance, of meditation.

What got me into that state? The sound of hymns being chanted all around, the heady aura of the place, or the genuine devotion of the people around me. How long was I in that state? Five minutes or one hour. What did I feel in that state? Unbidden affection for my land, pride in my people, renewed belief in myself. And perhaps, even in a higher being.

The sea of saffron integrated outside the temple gate once again. The speck of bright blue that was I walked along with it, happy. “Thanks Maa,” I whispered and smiled to Mother.

About the Author: Born and brought up in a multi-cultural setting in north-east India, Satarupa Paul is currently a ‘journalist by chance, backpacker by choice, gastronome by device.’ She has lived and worked in several cities in India and her work has been published in many newspapers and magazines. You can follow her food, photography and travel journey on Facebook or on Twitter (@satarupapaul).