New York City: All Out Of Proportion 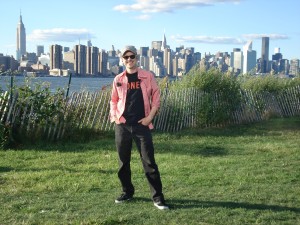 All Out Of Proportion
By Barry Divola

I fell in love with New York long before I got there. It was 1979 and I was sitting in a cinema in Sydney, Australia, where I live. The lights went down and luminous black-and-white images of Manhattan flickered across the screen while Gershwin played in the background and a man with a nervy, nasal voice said “Chapter One. He adored New York City. He idolised it all out of proportion.”

I was a goner and it was all Woody Allen’s fault.

I got there for the first time in 1983 at the tail-end of my first overseas trip. I stayed with my great-uncle Charlie, who had emigrated from the Aeolian Islands north of Sicily after the end of the First World War and opened a deli on Bleecker Street in Greenwich Village. He was long retired and in his nineties by the time I got to visit, living in his tiny apartment above his former store with his girlfriend Molly, a crazy Irish woman in her eighties who had long red hair and a handful of teeth left in her mouth. I felt like I’d landed on another planet.

I was only there for a few days and they were very protective of me and my cousin, who I was travelling with. On the last morning, the two of us told them we were going out by ourselves for the day. When we returned from wandering the streets for hours, it was after sunset. They were about to call the police.

“You don’t walk in this city by yourselves at this time of night,” Molly scolded, verging on tears. “It’s not safe.”

She was probably right. It was 1983, after all, and we were young, wide-eyed idiots who had absolutely no street smarts.

Since the early ’90s I’ve returned to New York almost every year. It’s not just my favourite city; it’s one of my favourite things. I usually go in September and October, in the northern autumn, when the leaves are changing colour and the people are coming back to life following the notoriously sweltering New York summer.

I love being there by myself. Of course, you’re never really by yourself in New York, but you can be alone and not lonely there. I love the fact that it’s a series of walkable neighbourhoods rather than a car-dependent sprawl like LA. When I go to New York, I walk more, I eat more, I drink more, I buy more and I dream more. It’s an endless well of inspiration. I’m yet to exhaust the place. I always return to Sydney re-invigorated and thinking about the next trip.

“Why are you going there again?” my father asked me about ten years ago. “There are other cities in the world, you know. Haven’t you done New York yet?”

And the answer is no. I haven’t. I feel like I will never “do” it. It’s not just that the city is in a constant state of change. A lot of it actually stays the same, but I experience it afresh each time. Every single time the view of that skyline fills the windscreen of the taxi from JFK, I involuntarily smile. It has never got old and I hope it never will.

I’ve fallen into patterns. I always spend a day criss-crossing the streets between Alphabet City and 2nd Avenue in the East Village, stopping in at the community gardens and my favourite stores and cafes and bars. I always get the L train to Williamsburg on the weekend to hang with the hipsters and browse the flea markets. I always spend an afternoon in the Strand bookstore, emerging hours later with my bank balance a little lighter, weighed down with two bags heavy with new discoveries. I always visit Bill, who for the last couple of decades has been the caretaker at the Earth Room, a loft in Soho that is home to an art installation that is basically an apartment filled with dirt. Bill is as calm and unchangeable as the 127,000 kilograms of rich, dark soil he oversees and we’ve become something like friends as I check in each year.

And every year, usually towards the end of my trip, I make a point of having dinner at August, a restaurant that sits on Bleecker Street in the same spot where my great-uncle once had his store, below the apartment where I first stayed with him 30 years ago. I raise a glass to Charlie’s memory and I toast the city I love.

Just like Woody, I idolise it all out of proportion. I always will.

ABOUT THE AUTHOR: Barry Divola is a freelance journalist and author from Australia. He mainly writes about music, popular culture, food and travel. He has never lived in New York, but has travelled there 17 times in the last 22 years.

May 2017 News: 3 New Countries Takes me to #99!
"This Week in Travel" with We Said Go Travel
America: Home Healed Home After Hurricane Sandy
Orbitz Press Release: Bermuda with Richard and Lisa