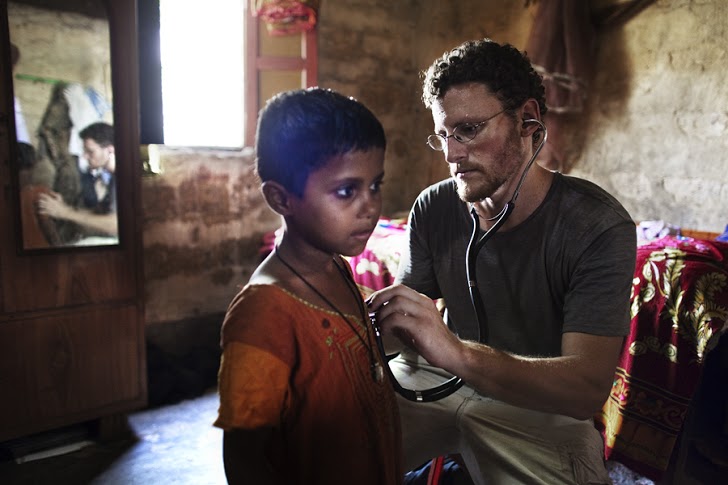 Dr. Jonathan Reisman is a New Jersey hero among us. He is personally saving lives and changing communities on our planet. For the last ten years, he has been able to combine his love of travel with his gift of helping people, which is what convinced him to go to medical school.

Currently, he is working on a project to protect mothers after childbirth in an area with the highest maternal mortality in India. In the past, he studied nuclear pollution from nuclear weapons factories in the Southern Ural Region, and even visited the city of Chelyabinsk where meteor fragments rained down from the sky. He conducted a project with the CDC to learn why Alaska Native children have high rates of respiratory infection, and found that lack of running water and household crowding may play a role. He even created his own 501c3, WHEN, as a medical student to help move Indian society toward solving some of its long-standing problems.

As a medical student, Jonathan spent over seven months in India (as well as one month in Belize) working for various charities, including Calcutta Rescue (CR) in Kolkata and saw a tremendous need for better healthcare. He saw the need to speak Hindi in order to communicate with his patients, fellow physicians and for his travels around the giant sub-continent. The most challenging aspect of his international medical work is trying to make changes in healthcare systems that are very set in their ways. People are difficult to motivate. Still, over the years he has been working in India he sees incremental progress occurring. It is clear that bridges are being built and more lives can be saved.

Jonathan did not come from a family of travelers, but first got hooked while working in in Russia after college. He visited the country five times over three years, traveling extensively throughout the country, including many isolated villages where people claimed he was the first American to ever enter these places. He learned Russian and was able to work as a translator for other tourists and visiting sociologists within six months of arriving.

He worked on several projects, including a study of the international environmental movement and it’s impact on the timber industry since the end of the Soviet Union. He also studied nuclear pollution from nuclear weapons factories in the Southern Ural Region, and even visited the city of Chelyabinsk where meteor fragments received rained down from the sky. He also received a grant for independent research from the US State Department to study native culture in Siberia and the Russian Far East. For this project, he spent five months on the Kamchatka Peninsula in eastern Russia, traveling from village to village and talking to people about culture and history. He participated in indigenous subsistence activities including salmon fishing, gathering berries and mushrooms and seal hunting with natives.

Jonathan did not move much as a kid: “I love traveling as it gives new perspective on how varied human life and culture is and at the same time how similar all people are.” He lives for those moving experiences during travel when he really connected with people living in such different circumstances from his own. He was impressed by how rugged, and still how hospitable people in Siberia were.

It was while traveling in Kamchatka, Russia that he realized that becoming a doctor would give him the skills to help people living in isolated and under-served areas. Immediately after returning home from Kamchatka he enrolled in post-baccalaureate science classes and started studying for the MCAT to apply to medical school.

Since going to medical school he has combined his interests in travel with projects to improve health in those out of the way places he came to love while traveling. He is especially interested in subsistence lifestyles of people of the far north. In 2012, he traveled to Alaska to work with the CDC to study a bacteria that lives inside people’s noses and commonly causes pneumonia and meningitis. He conducted a project with the CDC to learn why Alaska Native children have high rates of infection, and found that lack of running water and household crowding may play a role. A paper based on this research is currently being submitted for publication.

Jonathan learned Hindi from books and by talking to people throughout India. This is the same way he learned Russian. He says an insatiable drive to learn helps, and every conversation becomes a lesson. The hardest part is not the written language, even though it is quite different from English in both Russian and Hindi, but rather just understanding where one word ends and the next begins when listening to native speakers talk. People in Russia say that “I speak Russian like a peasant, probably because I spent so much time in rural and hinterland areas, speaking with hunters, farmers and people of the land. In India it is so gratifying to speak Hindi with people because they meet very few westerners who learn the language. When I speak to people in a village in Hindi, I see their eyes light up with surprise at this white man speaking Hindi. You do not need to learn Hindi because English is so widespread, but when you get off the beaten tourist trail, really learning about people’s lives requires Hindi, or another of India’s many languages.”

Jonathan’s daily life in Lucknow, India is working in an office, sitting at a computer and frequently visiting hospitals in rural regions around Lucknow, speaking with doctors, nurses and midwives to figure out the barriers to making childbirth safer. He talks to government officials about the project, to find out why it’s not working, troubleshooting, and seeks experts in the field of behavior change and public health care in India. When he has time he also travels for pleasure, and recently enjoyed camel trekking in Rajasthan.

Jonathan advises travelers to always pack a basic pharmacy. In India, he always brings earplugs. When coming home from India he always empirically treats himself for the most common parasites just in case one took a ride home with him.

His most memorable moment while traveling was in Varanasi as a medical student.

I took a sitar lesson on a whim and ended up in a house where the family had been making sitars for several generations. They showed me sitars that were over 100 years old with ivory inlay. The lesson ended with a big family jam of guitars and sitars that was just so much fun. I left that lesson with the glow and serenity that only comes with those moving experiences of travel.

He started WHEN as soon as he returned to America after volunteering with Calcutta Rescue (CR) as a medical student:

I was so impressed with that organization as they are providing high-quality, evidence based healthcare to people living on the city’s streets and in slums, which is a very difficult population that is mobile and hard to follow up on. Still they keep incredible documentation of all patient interactions, which is something rarely seen in non-profits in the developing world. They also run several schools for street children, run occupational training workshops, install arsenic filters in rural West Bengal, and run clinics throughout the city. I was so impressed with their work that I decided to start a support group for them. WHEN has since expanded to taking on its own projects while still supporting CR with funds, volunteers, and strategy. One of WHEN’s current projects is helping to foster a greater interest in public health research among Indian medical professionals. There is currently inadequate education on public health issues in India, which are myriad, and Indian doctors to do come out of school with the mindset or the tools to help solve these issues.

WHEN offers grants to Indian researchers who wish to design their own projects but cannot compete for the meager funding offered by institutions in India. WHEN is also the American focal point for a growing network of doctors, residents, medical students, and public health experts helping to foster greater access to the international medical literature for Indian medical trainees in the hopes that most home-grown public health research from within India will help move the society toward solving some of its long-standing problems.

Dr. Reisman is a true American hero working to save and change lives. It was an honor to meet him in India.

This article first appeared in the Huffington Post Impact section.

What would you do? Operation Jericho
I am Grateful: WSGT November News 2018
Work up your appetite at Park City Ski Resort
LA Press Club Screening: This Changes Everything by Geena Davis Institute on Gender in Media

One response to “New Jersey Hero among Us: Dr. Jonathan Reisman”