Will you see will.i.am and The Revolution?

The MojaMoja 10th Annual Brunch & Benefit Concert are open to the public and will be followed by a day-time afterparty at the same venue. MojaMoja will feature breakout performances by Jungle Fire with their highly explosive psychedelic afro/latin funk sound; The Steoples, a genre-fusion alternative R&B duo; Wajatta, the collaborative between comedian-musician Reggie Watts and electronic musician, DJ and producer John Tejada; along with the drumming prodigy Elise Trouw, a gifted modern indie pop multi-instrumentalist who has a viral mashup of “Everlong” by Foo Fighters and “What You Won’t Do for Love” by Bobby Caldwell with more than 7 million views on Facebook. Soulection, an independent music platform, radio show, and artist collective featuring DJs Kronika and Sasha Marie, will headline MojaMoja’s afterparty.  All artists are donating their performances to benefit the MojaMoja Innovation Fund and House of Blues Music Forward Foundation.

MojaMoja is a volunteer driven event with more than 20 professionals who have volunteered approximately 100,000 hours collectively during the past decade. MojaMoja’s 10th annual event  will be produced in association with Senovva, a leading global design and management group offering production services to the entertainment industry, including major music award shows.

“MojaMoja spotlights breakout international talent and honors iconic artists and our growth over the years speaks to the demand for more space for alternative music,” said MojaMoja co-founder and 89.9 FM KCRW DJ Garth Trinidad. “Through our benefit concerts, we have created a unique community event and nurtured a cultural renaissance that raises the profiles of entertainers at its forefront that deserve recognition. I am proud of that, and proud to be celebrating our 10th anniversary.” 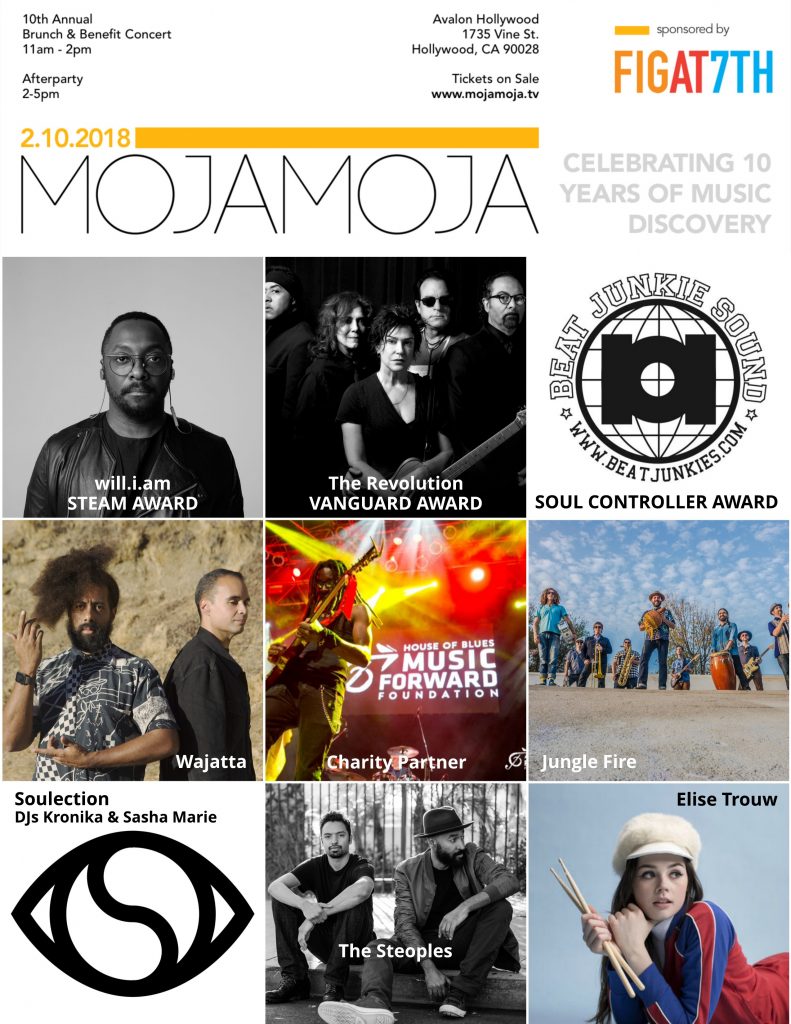 Established in 2009, the annual MojaMoja Brunch & Benefit Concert is a premier charity event that presents breakout performances by independent talent and honors distinguished artists. During the past decade MojaMoja performers have included Janelle Monáe, Questlove, Flying Lotus, Little Dragon, Los Amigos Invisibles, Anderson .Paak and more than 60 artists from around the world. Also, during the past 10 years music icons including Sheila E., Nile Rodgers, along with fellow Rock & Roll Hall of Famers Mavis Staples, George Clinton, and Sly Stone have all been honored with the MojaMoja Vanguard Award. MojaMoja has been featured in Vanity Fair, Variety, The Huffington Post, SPIN Media, Billboard.biz, Essence, and VIBE.

The annual MojaMoja Brunch & Benefit Concert raises awareness and funds for the MojaMoja Innovation Fund at Liberty Hill Foundation; which supports nonprofits like this year’s charity partner the House of Blues Music Forward Foundation. This year’s goal is to raise $25,000.00 to provide (10) ten $2,500.00 stipends to underrepresented students at trade schools and community colleges who want to pursue an internship/apprenticeship in the fields of science, technology, engineering, arts and math (STEAM).

MojaMoja was co-founded in 2009 by Garth Trinidad, an NPR affiliate and KCRW 20-year veteran DJ; Ramona Wright, a strategic communication influencer, author, and host of The Chair podcast; and Oscar Merino, founder of 52BLEND, a creative agency specializing in the best live event experiences, talent, and supporting an inclusive culture.

Use and share promo code mojamoja10 to get tickets at a special $55 rate.

Take advantage of this limited offer, a $15 savings off of the $70 General Admission and $90 at the door.

There are a limited number of reduced tickets available, so act fast and grab yours today!

A Weekend Break in Dorset
Holidays are here! Gifts for the business traveler in your life
Best Cellphone for You and ME? LG V30
5 ways to celebrate your birthday on Boracay

Ramona Wright is a co-founder of MojaMoja, a totally volunteer driven charity event that is a platform for celebrating breakout artists and international icons shaping music and culture. Learn more about Ramona at www.leadloverelate.com and check out the latest episode of The Chair with Ramona Wright, her podcast on itunes.