Karoo, South Africa: To The Hell and Back

To The Hell and back

Names tend to rub off on the holder because of the magnetic power within the spoken word, and it was on the road to The Hell that I boarded this thought train. Why would anyone name their dwelling place after torture and misery? Our trip to The Hell in the Karoo region of South Africa was an unforgettable journey of discovery and wonder.

The Gamkaskloof or The Hell is a narrow and extremely isolated valley in the Swartberg mountain range that is 20 miles long and at most only 600 feet wide. It was first discovered and inhabited by the San Bushmen, and in 1830 a farmer wandered into this remote and fertile piece of earth and made it his home. Soon other families followed and the community grew to around 160 individuals.

It was only in 1962 that a road was built connecting this community with the outside world. For more than a century the ‘klovers’, as they called themselves, had to journey over the mountains on horseback to reach civilization. With the road making it easier to get around, the last farmer left Gamkaskloof in 1991 and it was declared a national monument in 1997. 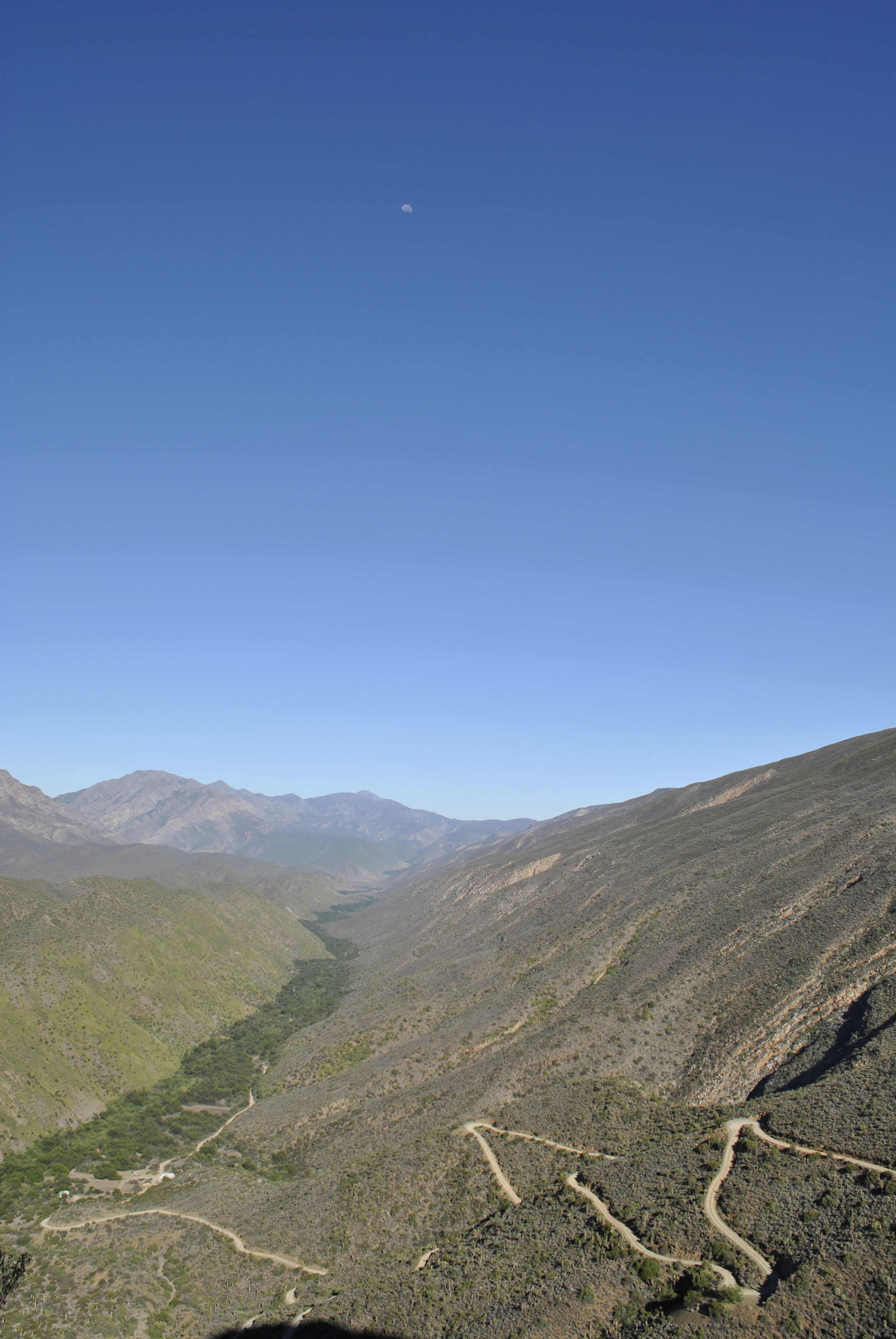 The closest town is the quaint village of Prince Albert and from there it is 37 miles, two and half hours drive to the entrance of The Hell. We had to stock up for our expedition and bought some homegrown lamb rib cutlets, fynbos honey (made of indigenous wild flowers) and fresh bread.

C.S. Lewis said that the safest road to hell is a gradual one with gentle slopes. In this case the road to The Hell was a dirt road with steep slopes and sharp switchbacks, dropping a hair raising 3000 feet down into the valley. The views are extraordinary, jaw dropping and nail biting all in one.

We reached the only kiosk and restaurant in The Hell after three hours and were thrilled to get out of the car. The air was warm and filled with a strange kind of antagonism. We were the only people there and the place looked deserted. I went into the shop and saw someone packing jam onto a shelf. To my amazement, the owner of the kiosk was the last born and bred ‘klover’ that is still staying there. We looked at photos of how life was like in The Hell and despite of what you may think, the residents had smiles on their faces.

Our final destination was a restored original farm dwelling an hour’s drive from there. We saw no other people on the way and with my vivid imagination a Stephan King bestseller played out in my mind. The thatched roof cottage was rustic indeed, complete with a touch of spider webs. We shared a small splash pool with a family of frogs, but we gave one another space to escape the sweltering heat.

Night time was the pinnacle of my internal journey and this is where I disembarked the train to enjoy the moment. Majestically the Swartberg Mountains sheltered us from both sides and the multitude of stars made me feel very small and totally insignificant. With the only available technology reduced to a flickering flame of a weather-beaten paraffin lamp, we found ourselves deep inside this isolated place called The Hell. We savored a meal of lamb, bread and good South African wine and felt a heavenly contentment around our humble feast. 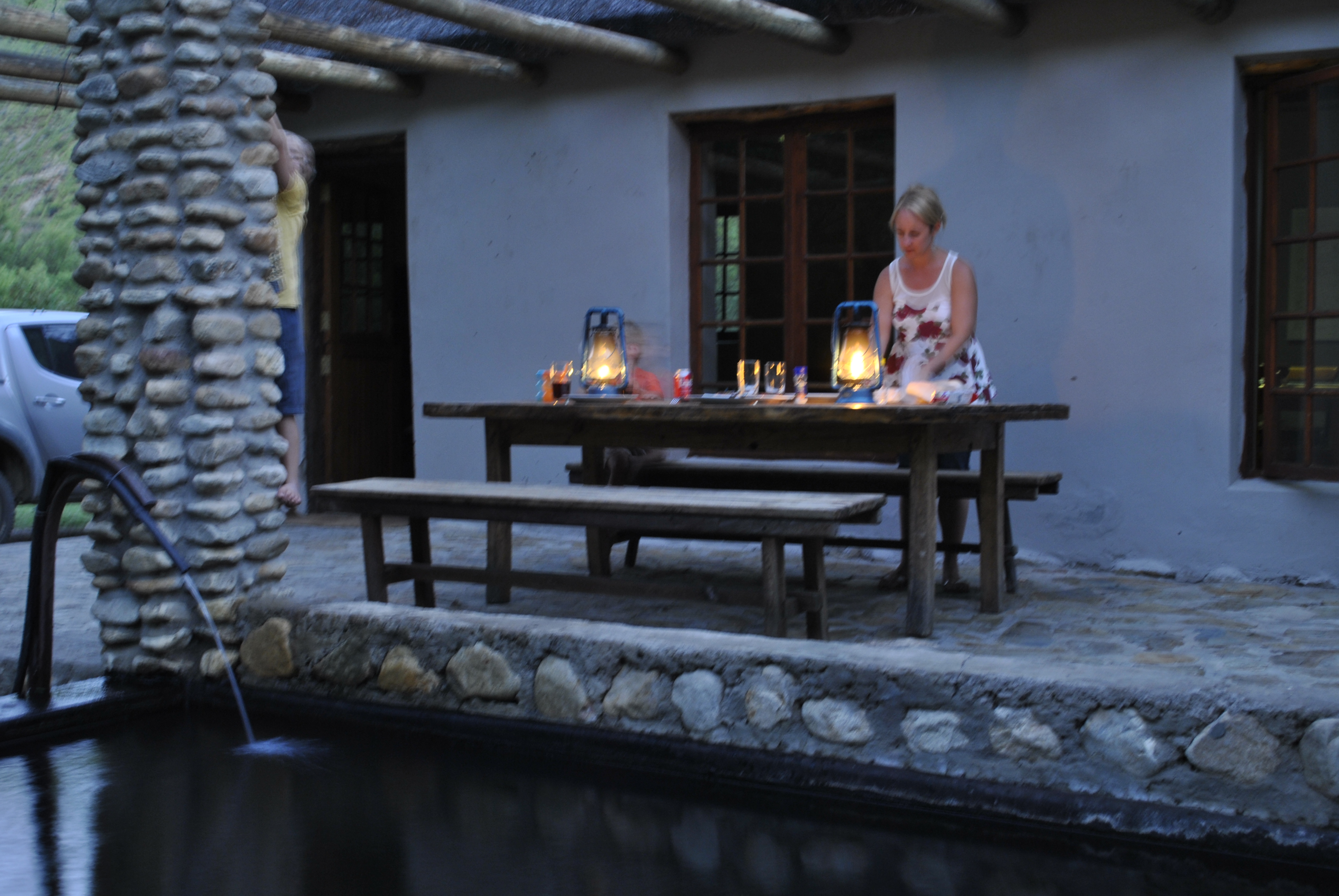 We slept in absolute silent darkness, and early the next morning before the first rays of sunlight could reach us down below, we were already outside exploring our new found travel treasure. The birds welcomed the new day and it was as if I wanted to hush them, asking them not to tell about the rare jewel we discovered. I was concerned that people will not deal with this piece of land with the necessary respect and understanding it deserves.

On our way back, we visited the old school and visitors’ center. It was there my thought train crashed as I discovered the truth about where the name, The Hell, came from. An animal inspector that once traveled down the mountain described the exceptionally difficult journey as “hell”. Even though the residents despised the name, it got stuck. Who knows, if the animal inspector came down from the mountain with a different perspective, this place could just as easily be named The Heaven. With these wise words of Oscar Wilde, I laid my thoughts to rest as we took the road leading out of The Hell into the light.

“We are each our own devil and we make this world our hell.” Oscar Wilde

2 responses to “Karoo, South Africa: To The Hell and Back”