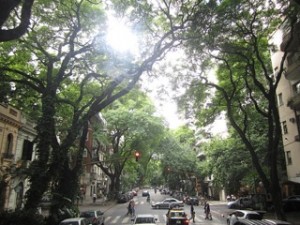 My entire life growing up, hearing stories about Argentineans, I was convinced they had to be the most patriotic race of all. It must have been the constant display of light blue and white ribbons hanging from every imaginable personal object, the inevitable appearance of the Argentinean futbol jersey at any and every South American event and the pride-infused voice of an Argentinean answering the most commonly asked question in Sydney.

‘So, what nationality are you?’

I suppose all migrants feel that way about their homeland, having left it so far behind, for so many reasons. These patriotic markers perhaps stem from a deeply buried fear of memories fading, bit by bit, slowly distorting and eventually disappearing like melting sand castles in high tide.

As I sit in this Buenos Aires restaurant, about to devour the steaming plate of home-made pasta or ‘tallarines’ as they’re called here, accompanied only by a glass of house ‘tinto’, I am reminded by the multitude of shades and facial features that surround me, that like Australia, this country too has a history of immigration centuries beyond Colombus’ arrival; where the many European foreigners and indigenous faces of the land became the base ingredients of Argentinean identity, simmered on a low heat for decades, gradually reducing the broth of language, and fusing the aroma of customs to create today’s distinctly Argentinean flavour.

“This is delicious!” I remark internally. The tallarines and their ‘tuco’, or sauce, are exactly like the ones my Grandmother makes, only she lives on the other side of this uniquely silver-toned river. I remember slurping them up, competing with my cousin Javier to see who could finish them first, so we could run out into the open backyard and play ‘till late amongst the endless rows of lemon and fig trees. I find it funny that I remember that. I was only four at the time. It is one of only a handful of memories of my flash of a life in Uruguay, Argentina’s sister land. Although they are not identical, they share significant historical and cultural DNA.

Before I can finish that thought, my waiter returns to check on my eating experience. I have never been so impressed by the service. He remembered every detail of my order and the two tables beside mine by heart and served them all with a quick wit and a Buenos Aires smile.

I couldn’t resist sticking around for a ‘cortado’- the perfect combination of a latte and a cappuccino, served in a stylish glass cup, while I skimmed through a tour brochure.

He spotted my map resting quietly on the table and offered me help with directions. ‘Plaza de mayo?’ I asked pleasantly surprised.

He offered to walk me himself as his shift was (conveniently) about to end. I should have remembered the advice I’d been given before leaving on just how good Argentinean men are at charming you with their good looks and utmost hospitality. But, just as conveniently for me, I forgot, and took this gorgeous man up on his offer.

As Ariel and I walked and chatted through the ample tree lined- streets of this old city reminiscent of a Parisian painting, I took in the essence of its timeless beauty. And its melancholy. A super metropolis with a history of promise.Once a new world power offering hope to European civil war escapees, today a third world paradise of sorts – for some. For others, it is a daily struggle; an increasingly violent jungle of possibilities enmeshed with ever-elusive hope.

Arriving at the immense plaza, where grieving mothers continue to march, decades after their sons’ and daughters’ disappearances, I was reminded of this country’s solemn political journey and decided to part ways with Ariel. He was intent on skipping the tour for a drink at the local ‘boliche’ but as tempting as it was to party until dawn, like I’d seen many ‘porteños’ do, I had so much more to explore in this fascinating city.

I gave him a ‘gracias’ kiss on the cheek, as is custom, and set off amongst the ocean of pigeons visiting the plaza that day.

I now know why the famous Tango ‘Mi buenos aires querido‘ – My beloved Buenos Aires, became an anthem of sorts. It provokes in you a sense of passion, drama, grief and undying gratitude. It’s an uncanny reflection of the breathtaking paradox that is Buenos Aires.

About the Author: Natalia Fernandez is an aspiring travel writer from Sydney, Australia. The daughter of South American migrants, her journeys began at a young age. As an adult, travelling, alongside her love for writing poetry and prose, became her obsessions. Combining her passions is a lifelong dream for Natalia who believes the world and its beautiful complexities are the physical route to discovering the secrets of the human spirit.