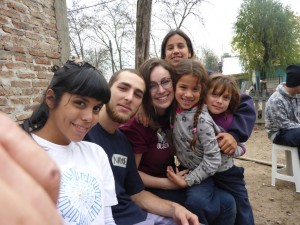 I’m still not sure where we went. We were miles outside the city now, and the roads were shrinking into oblivion. Wherever it was, it was a far cry from the bustling city lights and neon dreams that is Buenos Aires. On that bus, watching the sunset and horizon turn to mud in the distance, I began to understand what it meant for a place to be called Third World.

Our group of around fifty had split off from the hundreds of others to journey to our designated province, and our newly formed community practically buzzed in anticipation. But looking around, I didn’t see a skilled architect, a practical engineer, or anyone with particular physical strength. I just saw people. Usually, it takes more than people to build a house, much less a neighborhood.

Upon arrival, the older members of the group cautioned us to stay together on our walk to the schoolhouse, our temporary home for the weekend, because the neighborhood was especially volatile at night. The women were sent to the center of the pack as we tread through the mudded roads towards our safe house. Dinner and Maté couldn’t come fast enough for most, having been deprived of the tea for about two hours, which was practically a record for the entire Porteño civilization.

It’s amazing how little language is needed to connect with and understand another person. We are so much more than the words we know to say and the method of how to do so chosen by birth. Maybe it was the game of Ninja the group decided to play, maybe it was my awesome skills that won, maybe it was the way empanadas were passed from eight pairs of hands till they reached their owner, or maybe it was the way danced the hours away to the resident guitarist of the group. I’m not sure what it was, but we were friends after that. Turns out, we were going to need to be. Hours later, I felt the cold ground press roughly against my shoulder blades, despite the thin sleeping mats, but fell asleep faster than I can remember.

I squeezed my eyes shut, daring them to open.

I forced my heavy lids open and smiled. We beat the sun out of bed that day and lapped him in the process. Meeting the family was a shock I wasn’t ready for, in that there were three families living in a small hut fit for only a few. Meeting the family was a shock in that they held more joy than I could hope to fathom even though they had nothing.

My heart ripped for Maxi and Ari, who had lost their parents and were each other’s only people. Ari had lived less than a decade, but held unparalleled levels of tenacity and strength. It was superhuman. Building the foundation of the house, he put every single ounce of energy possible for every thrust of the shovel into the rigid ground. I didn’t know it possible to be in awe of someone half your age.

Two days of manual labor flew by, because that was of no real consequence. Those memories do not linger. Those of dancing and twirling on break time with Maxi and the girls while they asked me to speak English for them and laughed uncontrollably when I complied; those linger. Memories of games and mud fights and races echo off the corners of my mind. Memories of gratitude and tears when the house was completed and was ready to become a home remain imprinted somewhere within me, incapable of being forgotten.

Memories of my inability to fight tears as we had to leave, which I knew for me would be for a lifetime, linger even though I wish they wouldn’t. I have never been more in awe of the beauty of a place or the beauty of a family. Joy was found in the mud, in the nothing. Joy was found in the living, and those they were living it with. To these people, perseverance was intrinsic and hard work a daily necessity. They broke me. I hope I am new.

About the Author: Julia Neeson is currently an undergraduate student at Texas A&M University majoring in General Business with Minors in English Rhetoric and Art. Interests include travel and dreaming of such, music that inspires, used bookstores, and laughing till I can feel my non-existent six pack.