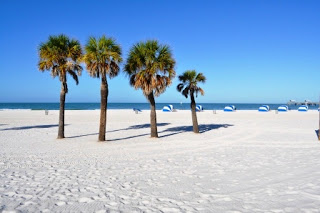 This Christmas felt different from the other four Bill and I have spent together. 2007 was white and freezing at -31 degrees C (-24 F) in Calgary, Alberta! 2008 was wet and cool in Seattle, Washington. Then it turned sunny and just right at the Suwannee River Music Park in Florida in 2009. It was back in Seattle in 2010. In 2011, it was particularly hard to find the spirit. Bill had a close wake-up call. He had a heart attack on the eighth of December.

So we tried to find it in another place, away from the RV. We went to the Sand Pebble Resort of Vacation Internationale, Bill’s time share, in Treasure Island, Florida. Our 1-BR unit was spacious enough for 2 couples and had a view of the Gulf of Mexico from the balcony. We felt then that no one could call us homeless anymore! At the ground floor there is a hot tub, a heated pool, pool table, and bar. Every afternoon everybody gathered for an activity: bingo, ice cream socials, count the shells, etc. But it is the quiet beach at the back that was our favorite hideaway.

But, like the other years, we got busy looking for stocking stuffers for our Christmas Eve opening of gifts. Bill and I happily lost each other at the Mustang Florida Flea Market for an hour to hunt for the little treasures. Not satisfied with our haul, we went to the Tyrone Square Mall to complete our finds. Each stash was carefully guarded and closed tight so no curious intruder can take a peek. The cheapskate that I am, I spent no more than of $25; hopefully, Bill did not spend too much more!

The following day we went for a long drive north along the Gulf Blvd that connects the 10 barrier islands and 13 beaches, collectively known as the Tampa Bay Beaches. It was never-ending miles of beach homes, condo-resorts, and palm trees. The best of them all is to the north in Clearwater, Florida, just before reaching the Honeymoon Island State Park: Clearwater Beach, famous for white powdery sand (Boracay in my home country, the Philippines, is pink powdery). It was a beach haven much bigger than the Keys, adjacent to a large metropolitan area, and a place where we could conceivably settle.

Then the next day we discovered legendary Ybor City in Greater Tampa, Florida which was once the ‘Cigar Capital of the World’ after Don Vicente Martinez-Ybor moved his cigar factory from Key West to Tampa in the early 1900s. Other cigar-makers followed, building their own factories. Immigrants from Spain, Cuba and Sicily came to work in them; Romanian merchants opened stores; German lithographers brought the latest technology to print the cigar labels. Today it is a lively entertainment and arts district, complete with demonstrations of hand-rolling cigars.

On Christmas Eve, Bill and I attended a joyous mass at St. John Vianney in St. Pete’s Beach, Florida with a little pageant of kids as angels, shepherds, and the Three Kings around the Nativity Scene at the altar. Then we came home to our Noche Buena (Filipinos’ Christmas Eve meal) of maple/honey glazed ham, Dubliner cheese, fancy crackers, and my very first Christmas Stollen. At the stroke of 12, Bill got his new polar bear jammies, pristine white hankies, and a heart warmer for cold hands! He definitely spent more! I got new diamond earrings (to replace the ones I had lost), new fit-over dark glasses (to replace the one I also had lost) plus a little purse! Talks with my kids on the phone capped our Christmas Eve.

After a light left-over breakfast, off we went to complete our drive to the south end of Gulf Blvd for a couple more beaches and a feat of engineering, the Sunshine Skyway Bridge! Back at the condo, a light lunch preceded our one last time at the hot tub and Skype sessions with Bill’s kids. And to cap it all, we went to see Mission Impossible on the big screen and dined at Joey’s Famous Pizza Kitchen in downtown St. Petersburg, Florida to spare me from cooking (or Bill from having to eat my cooking)!

Christmas this year was surely different, away from the RV, away from family, away from camping friends, just by our lonesome selves. We found it everywhere in the beaches, the hot tub, the local history, the shopping, the midnight mass, the Noche Buena, the movie, the pizza…because we found Christmas most in us. We are a couple who met late in life, but early in dreams. The Christmas spirit, after all, is the special kinship He has made possible. We will find it in Treasure Island, anywhere, and everywhere, together.

About the Author: Carol Esguerra Colborn
After stints as CEO of Philippine pioneers in information technology, Carol migrated to the US to take care of grandkids, become a business counselor in SCORE, and serve as adjunct professor in three schools of higher learning in Seattle. She married Bill in 2008; they started and recently completed a 4-year cruise of North America in an RV which is written about in a blog. Carol has a BS in Math, an MBA, and a DPA and from the University of the Philippines.