The concept of time often becomes irrelevant when travelling as magical moments can happen in seconds, hours or days.  Despite only spending a week in Rwanda, it provided some of the most memorable moments of my life and is a place I hope to visit again.

It is a thought-provoking nation, a country of contrasts and one that creates conflicting emotions.  I experienced the thrill of getting up close and personal with mountain gorillas yet feared for the future of these endangered creatures.  I was mesmerised by the stunning lush landscape and pleasant climate but was aware of the significant poverty that plagues so many of the people.  And I saw signs that Rwanda is developing as a nation as it recovers from the brutal atrocities of 1994, but learned that there were still hoards of prisoners awaiting trial for the part they played.

The Rwandan genocide is like a black cloud that remains after a storm in an otherwise blue sky.

But this sky is getting brighter and Rwanda is a country that has so much to offer a traveller with an open mind and adventurous spirit.

Joining a trek to spend an hour viewing these endangered creatures in their natural habitat is the main reason most travellers visit Rwanda and I was no exception.  I have never come across anyone who has trekked to mountain gorillas in Rwanda and regretted it.  Encountering a family who acknowledge your presence with a passing glance that borders on boredom, turning around to find an intimidating silverback approaching you and observing a large female with an infant on her back climb a tree with an agility that contradicts her powerful build is an unbelievable experience.  Getting up close and personal with creatures who are 98% similar to the human race and realising the main reason they are endangered is because of actions of that same human race is very thought-provoking.

There have been moments in my life when I have had a sudden awareness of both the insignificance and importance of the human race’s role in the bigger picture.  This was one of those moments. 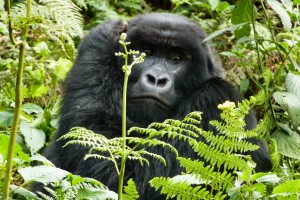 The Rwandan Genocide in 1994 saw the mass murder of over 20% of the population in just 100 days.  It was the murder of Rwandans by Rwandans.  I was 20 years old and whilst I’m ashamed to say I don’t remember much about it at the time, sadly I am not alone.  Unfortunately there were people who WERE aware of it but chose inaction as a course of action.  The international community’s lack of response to what was happening in 1994 was shameful.

A visit to the Genocide Museum is a heart-breaking but essential experience for anyone traveling in Rwanda.  In addition to serving as a memorial to help locals’ grieve, it is an educational centre that raises awareness of acts of genocide both in Rwanda and other parts of the world in the hope that education leads to the prevention of future tragedy

It’s difficult to leave the Museum with a dry eye and my head was plagued with so many conflicting thoughts.  It’s difficult to comprehend the brutal atrocities that humans are capable of inflicting on each other but it’s also difficult to judge the actions of those who turned on their own neighbours.  How would I act in such an impossible situation?  I’m thankful I’ve never been in the position to find out.

Ruhengeri is the closest town to the mountain gorilla trek headquarters and receives a number of foreign visitors as a result.  In an effort to make a living from tourism in the area, a group of locals have created a Cultural Village.

It is a staged village where no one lives.  Its sole purpose is to illustrate the Rwandan village lifestyle through demonstrations of housing, hunting, cooking, music, dancing and a very entertaining medicine man who was only upstaged by a characteristic Pygmy. 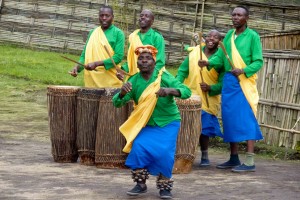 It was a thoroughly enjoyable day and not only provided some interesting background on the Rwandan countryside lifestyle but was an opportunity to mix with friendly and entertaining locals through general conversation, banter and of course the obligatory group dance at the end!

Travellers can sometimes get a bit jaded by ‘touristy’ moments and we sometimes forget the importance of tourism as an income in developing countries.

Don’t let Rwanda’s traumatic history deter you. This is a country in recovery, a country that is relatively safe for tourists and a country full of beautiful people.  Almost all Rwandans I met begged me to ‘spread the word’ about how beautiful their country is and to encourage my friends to visit.  They recognise the value of tourism to their country and they are proud of their landscape, culture and wildlife.

You won’t be disappointed!

3 responses to “Memorable Moments in Rwanda”