Melbourne, Australia: Be Brave and Busk

The heavy red curtain falls to the ground. It’s intermission, and the audience spills out of the Center Stage Theatre, buzzing from the musical energy of the show.

A 9 year old in a little pink dress, her mullet haircut askew in a rainbow headband, struts confidently in front of her entire extended family, and – feeling inspired – belts out a song.

Now that I’m 22, I’m not so quick to sing in front of crowds. But if I can remember the bold little girl I once was, I can rack up the courage to perform.

In Australia, they call it “busking.” Here in Melbourne, the art and music center of Australia, you’ll see them everyday. All of these artists are required by the city to get a permit that they audition for. The streets are competitive. There is a lot of talent here. Many people perform as their main livelihood. 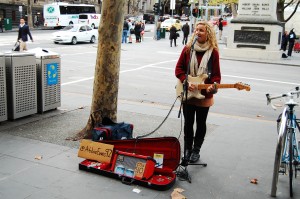 On a busy intersection in the CBD a blonde teenager closes her eyes, crooning a quiet song into her microphone while finger picking an acoustic guitar. Her soft voice is magnified by the amplifier so even the traffic and trams cannot block her soothing melodies.

Further down the road a homeless-looking man in a tattered suit and top hat plunks out funky oldies on an old piano. Passers-by are free to request songs from a list on the side, hopefully in exchange for a modest donation. Coins clink in his bucket as Japanese tourists gawk and take photos. 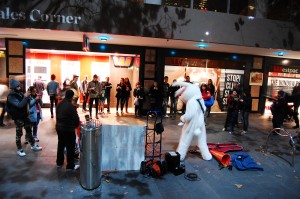 Nighttime, and the city comes alive. Lights dazzle from all directions as cars and trams stream down the road.  In the midst of a giggling crowd, a guy in a full-body bunny suit rocks out on his electric guitar, creating a funky beat. Couples laugh arm in arm as they acknowledge his silliness.

Then there’s me, playing my ukulele on a quiet street. I enjoy the echo of my voice bouncing down the alleyways. I put out the case of my instrument and people drop in coins – here they have both a $1 and a $2 coin, which buskers appreciate.

For me, it’s not about the money. I can practice my music and see people’s reactions, what songs work and what songs I should rework. 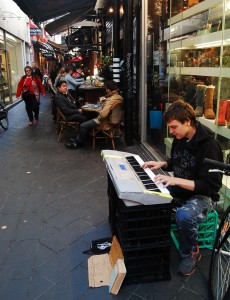 Busking is a great way for musicians to tackle their stage fright – playing in front of an audience can be scary, especially strangers on the street! The first coin that falls in your hat is a huge encouragement.

I’ve travelled around the USA, in New Zealand, and Australia, and have met many talented musicians who are exploring the world with their instruments. Many sell CDs for $10 or $20 which they make on their computers, turning quite a profit: money that can be put towards flights and hostels so they can keep traveling. 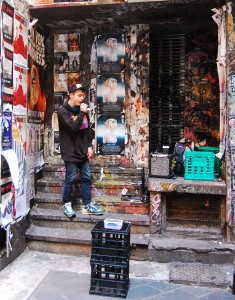 And who knows, there’s always the possibility that a music producer will hear you and fall in love with your music, or that your future band mates might hear your voice and decide they want you in their band, or that you might just cheer up someone who is having a bad day.

For young musicians, I’d say busking is a great way to practice and build your confidence. So get out there, and give it a shot!

About the Author: Amberly Young is a traveling writer, photographer, and musician. She plays piano, flute, ukulele, guitar, and sings! After she graduated from university, she hopped on a plane to New Zealand, stayed there a year volunteering on farms, and spent 4 months travelling in Southeast Asia. She is currently living in Melbourne, Australia, busking around the city with a 1-year working holiday visa! Check out her website at www.whereisamber.com

Stella Australis: Cruising Through Time at the Bottom of the World
Travel meaningfully: How to make the most of your travels
USA Today 10best Readers Choice Awards: Vote for your favorite hot air balloon rides in North Americ...
Wine Harvest In Champagne – Through The Eyes of The Grape Pickers