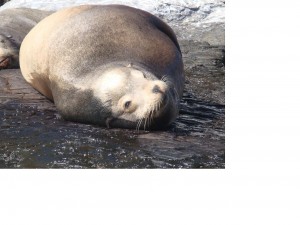 The Sea of Cortez is so large that the conquistador, Hernán Cortez, thought it was the ocean. Sometimes it is sapphire, bluer than the sky and deep, as if penetrating the skin’s surface and merging with the sea in me. Near the shore, the Sea often exposes the rocky beaches it covers like a jade-green slip underneath a woman’s gown.

But the protected waters of Loreto Bay National Marine Park reveal another curious world to anyone who ventures beneath the surface. The common and beautiful Sergeant Majors with yellow and black vertical stripes swim with and around you in schools if they’ve decided you’re not a threat. A spiny Bullseye Pufferfish moves its body with tiny improbable fins and follows from a distance like a stray dog might. Often the curiosity of a Trumpetfish makes it follow and watch you with its long snout and even longer body suggesting an evolution more like eel than fish. Flat bodies of the Cortez Angelfish move like sails in the water. They parade their unmatched beauty of purple and grey flared with dramatic black, yellow and white stripes as they reveal themselves from an underwater rocky shore.

Much of the sea life is more wary. Triggerfish keep their distance. Their prehistoric top fins stick out of the water like sharks as they chase smaller fish. Parrotfish stay deep and take cautionary interest in humans, though their faces look like an alien relation. A Stingray blends with the sandy sea bottom and shakes its body as it moves away upon any sign of detection. Tiny bright blue fish and others, so brown they are almost black, must sense the destructive potential of the human race as they zip and dash through rocks.

A rocky outcropping is adorned with sea lions bathing their large bodies in the sun. They lounge close to one another, comfortable in sea lion society. Some look innocent, almost childlike, though their huge bodies betray the face. Some look like old men with large foreheads, barking orders and thwarting the very appearance of a threat. All of them have whiskers that shine in the sunlight and frame their faces. Nearby on the water’s surface, giant brown feathers rise from some invisible source. The forms are really the flippers and feet of the lions poking out of the sea as they recline on their backs, bodies submerged.

A suggestion arises from the capitán: do I want to swim with them? I am instructed not to touch them, the rocks where they sit, nor to chase them, per park regulations. Setting aside my fears and a missed opportunity on a previous excursion, this time I jump in. On the shore, their barks seemed to come from some place deep within, now made obvious as I bear witness to one bellowing underwater. I can smell their bodies and watch one lion emit a stream of feces and urine like a leaf blower projecting a straight line of leaves. It is proof of their aliveness as a mammal like me.

I try to be present, enjoying the instant moment. They are strange mammals many times larger and heavier than me. But they are better swimmers than I as they dance and drop. At amazing depths beneath me, they glide like well-made paper airplanes streamlined in the wind. One charges me from behind so I don’t realize it until I turn around to see the rushing lion abruptly change directions within a safe distance and plunge underneath me. I had no time to fear it or react.

In an instant, I realize I am surrounded by lions just by simply being. There is no need to dive or chase after them. When it occurs to me, I count seven around me, a cascade of sea mammals suspended like a curtain falling to unreachable depths. Several are playing with each other, going round and round, then in reverse, their sleek bodies twirling in the water. Some scratch their faces with feet that look like hands. One tilts its head looking at me as it lies on its back. Another lion swims close enough to look at me with eyes big and black as 8-balls. Some dart around and beneath me. Their enormous body strength is magnified by their numbers, but they all look happy, unthreatened.

I stay and watch as long as I dare or can, suspended in water starting to get cold, the warmth of the September Sea only a memory now. I revel in the shared moment as if a part of me is forever tied to the fate of a simple sea lion. For an instant, I am part of all the greatness I observe in the Sea, not separate from it.

About the Author: Leslie Castro is a recovering lawyer and aspiring writer.