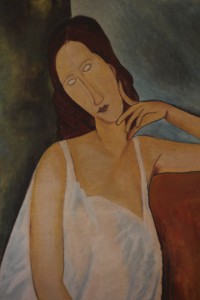 I landed in Havana fairly late on the evening of September 5th, 2013. In our last email exchange, Raúl – the friend of a friend of my boyfriend’s friend – had specified he’d be wearing a straw hat with over-sized sunglasses; I, had sent him a picture of my silly face. So upon exiting Jose Marti International Airport, it was easy to recognize each other between the crowds.

Shortly after, Raúl placed my two leather bags in the boot of a charming red Deux Chevaux. I sat in the back, Raúl sat in front – and as questions flew back and forth – our chófer drove, windows down, along deserted roads with thriving vegetation.

When we reached n° 637 on the Calle 1 of the Vedado, the car stopped – and despite my insistence – Raúl didn’t let me pay a cent. Instead, he quickly switched subjects:

“ I hope you don’t mind walking up the stairs: our elevator from the 1950’s just broke down.” He said with his Cuban accent.
“Of course not, I’m young!” I exclaimed. Except I hadn’t realized it was ten floors we actually had to deal with…

Sweating heavily through our light summer clothes, we wished a good night to the many neighbors we crossed as we climbed, and finally got to the top. Raúl unlocked a grid, pulled the gold handle of a white door, and his mother appeared lying before a ventilator on a flowered couch. She was watching Avenida Brasil – a Brazilian telenovela particularly famous in Cuba.

“Hola mi amor.” She turned around and, as she saw me, she stood up.
“Mami, Julie. Julie, China.” Raúl introduced us.
“China?” I repeated, uncertain, as we shook hands.
“Can’t you see she looks Chinese?” Raúl teased and, as she feigned to slap him, he ran off to drop my stuff in the first bedroom, on the left of the short corridor.
“Did you eat?” China asked.
“No, but I’m fine.” I said.
“Raúl, fix her something to eat.”
Following China, I entered the kitchen and immediately recognized the copy of Jeanne Hébuterne, originally by Modigliani in 1919.
“Who did this?” I asked.
“I did.” Raúl replied, reaching out for the fridge.
“That’s amazing…I still can’t believe that woman killed herself, the year after, while being pregnant.” I said absorbed by the painting.
“She was in love.” Raúl answered, sprinkling salt and lemon over a diced avocado.
“ She should’ve sold her husband’s paintings, at least she would’ve made herself rich!” China intervened.
“Mami. The woman committed suicide after her husband’s death. Do you really think she cared about becoming rich?” Raúl shook his head, and we both sat at the rectangular dining table.
“Being pregnant, she should’ve thought like a mother before throwing herself out of the window.” China insisted, pouring the water she had boiled, earlier on, in a huge plastic container.
“Well mami, I suppose she was madly in love.” Raúl repeated.
“And God punished her for this.” China placed the water container in the fridge and stepped out of the kitchen.
“When did you start painting?” I asked.
“I always wanted to paint, but I never had time until – shortly before my father died – I broke my back, and well…that’s when I began.”
“What happened to your dad?” I poked a piece of mango with my fork.
“He had a heart attack. Would you like some water?” I nodded and approached my glass.
“I was alone at home. I heard him call, but – with my frozen backbone – I couldn’t do much. Eventually, I managed to crawl. Yet it was too late.” He shrugged.
“Are you a lonely child?”
“No. My sister arrived the following day: after nine years in London she had planned a surprise visit. Good timing, huh?” He chuckled and passed a hand through his greasy black hair.
“And now? How does your mother cope with you living in the Dominican Republic?”
“It’s hard. Yet it’s the only way we can ‘survive’. As a widow with two pensions, my mother only earns 400$ per month. I’d earn between 8$ and 12$ per month here, so…” he took our plates and walked towards the sink. “Anyways, I’ll move back to Cuba some day: I don’t want to lose our house to the state.” He stretched, and standing by the entrance of his room, he said:
“Buenas noches, Julie.”
“Thanks for everything, Raúl.”

That night, I went to sleep feeling grateful for everything I had and –caught by the spur of the moment – I vowed to never complain again. Too bad it only took an expensive and limited Internet access at the Melia Hotel, the next morning, to discourage my spoiled westerner soul.

About the Author: With her multicultural French, American and Italian origins, Julie has always been a dedicated traveler. Since she discovered the sharing of her stories enabled her to travel some more, she also became a passionate writer – who now mainly strives to travel so she can write, and write so she can travel more.
Blog: http://beretta.matadoru.com/

Guatemala: Waters With a Taste of Mountain
Writing: a 21st Century Requirement? Enter Now in our Gratitude Travel Writing Contest
Survivor, Sri Lanka
New York City: All Out Of Proportion

One response to “Raúl’s Havana”