Indonesia: Within a breath of the Komodos 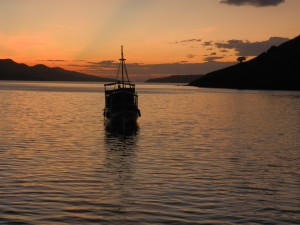 As the sun was about to say goodbye, we dropped anchor at a small bay at Komodo Island in Indonesia. As I sat at the front of the boat, the sense of enormity of the landscape in its entirety started to set in. The sun was now distributing its parting gift to mankind, an array of colours in the sky. The bright green of the surrounding hills and the blue of the sea gently fell asleep. The sun left after tenderly pulling a giant dark blanket over them. A bunch of flying foxes, which locals call ‘Batman’, left the hills.

Three small canoes were approaching us, a lone rower in each of them. Each of them put a knot around our boat and stabilized their canoes. One offered us beer, another pulled out small wooden statues of Komodo Dragons while the other asked us if we want to buy some fish. When we smiled and declined, they just hung around holding on to our boat. Their clothes were stained and tattered. I asked them their names: Ashi, Edi and Tesh. They climbed on to our boat and sat down in front of me. They kept looking at me quietly. I tried to have a conversation in my broken Bahasa Indonesia. Lobo, my wife, came over and sat next to me.

In the dim lights, all I could see was their lean frames with white eyes. They came from the small village on Komodo Island. They had a habit of speaking in unison reiterating each other. “I am twenty, he is thirty three,” said two of them. Simultaneously, the other guy said, “I am thirty three, these two are in their twenties.” “I am already married and I have a daughter,” said Edi and Tesh together while Ashi stopped at, “I am already married.” We got them thinking by asking what they would like their daughters to become when they grew up. Now they were speaking separately. Edi said, “Teacher, or perhaps doctor.” Tesh repeated and Ashi nodded in agreement. Then Tesh said, “No, no, she should become a police woman.” Everyone agreed again. “There is a lot of corruption,” said Ashi. “Police keep harassing us, our daughters can punch them and change them,” said Edi. We all agreed amid laughter. Edi then suggested, “Why stop at police woman, why not become the President of Indonesia? Even more punch.” More laughter followed.

At times we just sat quietly, looking at one another. Tesh said with an air of authority, pointing his finger at us and then throwing it down, “I liked talking to you two.” He said that in a rough way that seemed completely earnest. I loved that moment; complete strangers connected by the fragile thread of my broken Bahasa Indonesia and a much more intricate and complicated mesh of threads making strangers want to know about each other.

As they prepared to sail away, Edi asked, “Do you have some medicines? My daughter has fever for the last two days.” I gave him some medicines with directions but asked him to definitely consult a doctor if things don’t improve. Edi agreed to do so but the three spoke together again, “Our village has no doctor. We only have a mosque.”

After dinner, we went up to the roof of the boat. Our boat turned off its lights and the noisy generators. In the vast darkness that followed, the starlight was still providing silhouette to the hills. What were the Komodo Dragons doing over there?

In this moonless night, distant galaxies were visible as glittering mist. The sky was a dark bowl punctured by several small holes through which the universe was pouring in. The sea below was rippling gently. We could hear small fish breaking the surface every now and then. And then we noticed the magic of the reflections of two bright stars flirting with each other. In the rippling water, their reflections kissed and then jumped away. These stars, separated by billions of light years for billions of years, got to embrace and play with each other every night in these waters. As we watched this miracle, we recounted how our own lives had criss-crossed. Both of us had been born at small towns in China and India respectively. How did we overcome geography, our birth into different religions, our years of upbringing in different cultures, our food habits, and belief systems to come to accept one another as soul mates?

That night, the conditions at Komodo Island were as such. We felt as one with the stars, the sky, the hills, the sea, what lied lay deep within the sea, the fish, the Batman, our boat’s captain, Edi, Tesh, and Ashi. We kissed.

About the Author: Shivaji Das comes from the north-eastern province of Assam in India, presently working as a management consultant in Singapore. Shivaji’s writings have been published in various magazines such as Time, Venture Mag, Hack Writers.