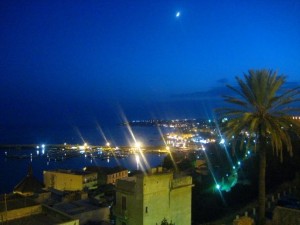 Nights here were always like this. Lazy, hot and languid. She looked out onto a steep labyrinth of streets and dangled her arms out the window. Little yellow puddles of light emerged from the wide brimmed hats of the metal posts. When the wind was in from Africa the shades wheeled about creaking in uneasy high pitched tones, not unlike the women making their daily trip to confession, shriving, as they caught sight of the long legged American singora turning over carciofole in the piazza, extending her wrists, inspecting their undersides, her movements plumed with scandal as she plucked an artichoke leaf and fingered its fruit.

“Dai, dov’è la luna questa sera?” l’americana leaned forward and slid her torso further out into the night. A half moon hung over the harbour, enveloped in an orange haze. The hillside here was dressed in square slabs of staggered heights; among the house rooftops lines of clothes could be seen, lacing through the streets like the dark triangle banners of a North End saint day, and then there were the occasional shadows of exotic verdure. She often thought the palms in this place carried on like the locals- swaying lightly in the breeze, nodding at the passer-bys, every-so-often careening in violent gusts of motion, dramatically bowing to a lovely lady en robe noire.

She could hear the Italians out and about, chirping staccato syllables down into the medina, searching for delle belle donne, singing and cheering each other on. It was hard to believe that she had been here for almost three months now, living within these walls of catholocized cement, sitting in windows that looked out to Tunisia. In the evenings she watched the boats leaving the harbour and imagined herself wrapped up in a sail, stowed away on a Mediterranean voyage, emerging from the hull two days later into a land of Arabian nights and alchemistes.

The fishermen were not at their boats now, the older group didn’t leave to join the fleet until late in the night, seemingly waiting until the air was unbearably heavy with language to escape off into the still and placid night of the sea. When they returned it would be early in the morning and they’d hurry to unload their catch before the heat of the day set in.

That afternoon she’d left the house in such a state, the old medina at the end of siesta, late, past five when the sun was not so hot but the streets were still empty. Had climbed up to the church that hovered over the city, sat in a pew and silently waited.

One after another they entered, all on their own with no priest to lead them, no man in the church save the statue of Jesus, lightly cracked skin and those same outstretched hands. They weren’t looking to him: creased faces and heavy hands running over the beads, murmuring “Santa Maria, piena di grazia, il Signore è con te. Tu sei benedetta fra le donne.”

About the Author: Meredith is an applied linguist currently living in London. She writes modern short fiction in her spare time and spends every spare penny on plane tickets for travel. She spent one month in Sicily staring out at the sea and watching the fishermen from her bedroom window in Sciacca.

Gratitude in Stone: The Pantheon, Paris
How to get great photos on your next holiday? Hire a professional!
Italy: 51 over 11 under 4 in 182
Italy: The Amalfi Coast