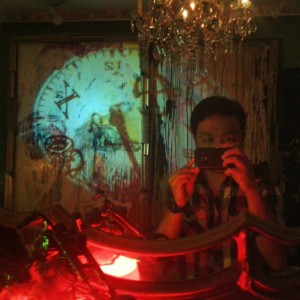 On the 25th of May, 2013, I found myself in a restaurant called Van Gogh is Bipolar. When I came to this place, I had a mission. My friends and I were making a 20-minute independent film titled ‘Blind’, and we were hunting for the perfect location for the blind date scene. This oddly-named restaurant on Maginhawa Street was first on our list. We wanted to use the place to tell a story, but, unexpectedly, we found that it had a unique story of its own.

Van Gogh was bipolar, and so is the owner of the restaurant, Jetro Rafael. Before he was clinically diagnosed as having bipolar disorder, he thought he was crazy. He was confused and disturbed by the sudden changes in his actions, thoughts, and emotions. After his diagnosis, he accepted his condition and learned how to deal with it. Jetro eventually discovered that he could cook and he was able to concoct mood-altering food that helped him. This gave birth to the Cuckoo Diet, which he served in the restaurant. As for the meal we had, it was an experience. We had a whole cabbage as an appetizer followed by the juiciest and most tender chicken dish as the main course. We sampled so many unknown combinations and textures, both light and heavy, but found every bite delicious. The culinary masterpiece was completed when he topped it off with dessert: a shot of brown sugar and absinthe on a spoon. According to the owner, absinthe was Van Gogh’s favourite drink. Undeniably, our spirits were high by the end of the meal.

Jetro groomed his place with things that were both familiar and peculiar. I saw a low-rise table full of Alice-in-Wonderland type of tea cups for mood-setting tea concoctions—Extra Upper, Happy Chill, Extra Calming, Upper, and Light Chill. These were placed in a large, rugged wooden shelf with cabinets, along with a microscope, a pack of plastic balloons, laboratory and wine glasses, trolls, and other things that were gathered during Jetro’s travels. The walls were covered with his passion paintings depicting many faces and bodies stripped of clothing. To me, the paintings illustrated how Jetro embraces humankind in all their shapes and colors. The chairs were old-fashioned, yet some had sneakers on their feet.The bathroom had plants in white pots, a gold shoe figurine, an upside-down umbrella cradling a light bulb, and so many more. Jetro’s place was strikingly reminiscent of some of Van Gogh’s paintings, specifically The Starry Night, Café Terrace at Night, The Starry Night over the Rhone, and The Night Café. But Jetro had a way of making the place his own; indeed, this canvas of his life was a beautiful mess.

The director and I were both speechless. At some point, I forgot that we were on location hunting. Then, when we were able to absorb everything, the mission came back to us and we knew that this was the perfect place for our film. Nervously, we walked up to Jetro, introduced ourselves, and asked if we could use his place for the film. He was hesitant because he had never allowed anyone to shoot a film in his restaurant cum home before. We sent him a proposal, and a few weeks later, he said yes. I will never forget his reply: “I was impressed by your passion, guys. I love passionate beings.” This is what passion can do, I realized. The craziest part of the story? When I said that at some point I forgot that we were on location hunting, it was because after 2 years of friendship, I realized that I was falling for the guy I was with, and so was he.

I am still in awe that there is a restaurant in my country which reminded me that life could be insanely beautiful.

About the Author: I’m Patricia Era from the Philippines. I write what I love. This piece is definitely the closest to my heart.

3 responses to “Philippines: A Modern Encounter with Van Gogh”