Kassel, Germany: When Too Much Art is Barely Enough 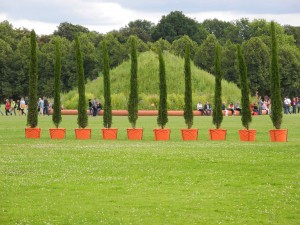 When too much art is barely enough: dOCUMENTA 2012
So, it’s a contemporary arts festival in Kassel, Germany. I’m in a massive park, filled with unusual artworks, and I’m confronted by a hill of weeds. I don’t see a number. Is it art? If so, what makes it art? Such are the dilemmas that confront visitors to Kassel’s five-yearly ‘Documenta’ festivals. It’s challenging, it’s stimulating, it’s often entertaining. And someone, at some point, has classified it all as art; even the flies-in-a-box, which seem absurd until you read the blurb, but which then become social comment.

We came to dOCUMENTA 13 quite by chance. With a week to fill between disembarking in Hamburg and arriving in Berlin, we asked around, we googled, we read guide books on Germany. A place new to us, with sights and wonders, interesting? ‘Kassel’, said a friend who’d visited before. ‘Lovely parks.’ We searched Kassel and found, not only parks (three of them, all huge, one with a great water feature and museum), but also a five-yearly contemporary art festival. Surprisingly, accommodation was still available. So we spent four nights in Kassel.

A festival on this scale transforms a town, and Kassel throws its heart into it. All the major buildings – not just the galleries – contain art. The city park, Karlsaue, contains art—mostly free, which is very generous of them. The lovely old Orangerie contains art (as well as its usual collection of scientific memorabilia). The old railway station, an old hospital, various small museums and hospitals and historic building—devoted to art. It’s a buzz.

Of course, in three days, we couldn’t see everything. We bought ‘The Book’, and we made choices, paying for two days and spending the third checking out free exhibits—mainly in Karlsaue park, home of the string of barges growing herbs, the wave sculpture made of moving water, a climbing edifice based on a scaffold and two rows of trees in pots that moved every few days as part of a grand strategic plan drawn up by a military consultant.

The best recommendations came from fellow tourists. In the park, I particularly enjoyed the audio installation for a thousand years, by Janet Cardiff and George Bures, from Canada. Sitting in a glade surrounded by speakers, it was easy to imagine that a choir has entered, that a battle is in progress, that a herd of galloping brumbies is sweeping past. Hard not to turn around or duck! These two also devised an ‘Alter Bahnhof Video Walk’, using smartphones and headsets to offer an alternative world as individuals followed a directed route through the old central station: seeing different events occurring on screen in the same settings is disorienting and provokes reflections on time and space.

I was moved by the works that recalled the persecution of particular groups by the National Socialists, especially at the old railway station—the scene of transportations to camps. I was impressed by the amount of work that reflected social values and environmental concerns, a theme this year.

We were lucky to find lodgings at the Mercure Hotel, which is very central and friendly. The rooms are bright and comfortable, and the atrium features posters from all the past Documenta festivals.
It’s hard to imagine how busy Kassel would be normally, but there is a permanent population of around 195,000 and plenty to do. The hop-on hop-off bus travels to the gorgeous Bergpark Wilhelmshöhe, with a huge statue of Herakles overlooking an occasional steep water cascade. There are museums, department stores and restaurants to suit The Immenhausen Glass Museum is within driving distance and combines historic displays with modern art glass.

And the hill of weeds? On the second day, when the light was better, we examined it more closely and found its number; it was indeed art. Entitled Doing Nothing Garden (by Song Dong, of China), it has been carefully planned to look random. We shake our heads and acknowledge our philistinism and move on. There is still much to see.

Documenta also brings with it large tents and portable buildings serving food. Patrons sit in the sun or under canopies in the large square in front of the The Fridericianum, the centre of the festival, enjoying a sandwich and a drink (‘gintonic’). At the foot of the 107 steps to Karlsaue Park, they mob the gelato van. Thus they gather their strength to tackle yet another building and to make their decisions about what is art and what they like.

At the end of Day Three, we lifted a glass to the good citizens of Kassel, who put on such a fantastic show and welcome hordes of artists and tourists every three years. It can’t be easy, but it’s a lot of fun for visitors.

About the Author: Eris Jane Harrison, writing as Eris Jane, is an accredited editor and casual playwright. She has had two long plays produced in Canberra, and several short plays have appeared in Sydney, Melbourne and Canberra. Eris lives and writes in Queanbeyan, Australia, and is the Convenor of the ACT Region Playwrights. She is also the author of an information booklet, Forgotten Australians: Supporting survivors of childhood institutional care in Australia.

PUBLISHER’S NOTE: I asked Eris for more information about her information booklet: The Aboriginal children were called the Stolen Generation. They make up a significant number of the hundreds of thousands of children who were removed or given into care. The Aboriginal children lost not only family but also culture and attachment to land, and the effects continue through the generations. Website: Forgotten Australians

Merzouga, Morocco: A night among the stars
Do You Want Your Travel to Australia to be Easy and Delicious?
Australia: Experiencing a Land Down Under
Nepal: Bless You Yoko - Bye Bye Babu