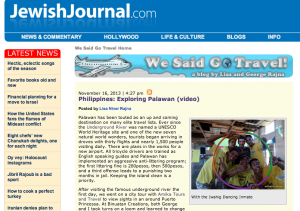 Palawan has been touted as an up and coming destination on many elite travel lists. Ever since the Underground River was named a UNESCO World Heritage site and one of the new seven natural world wonders, tourists began arriving in droves with thirty flights and nearly 1,500 people visiting daily. There are plans in the works for a new airport. All tricycle drivers are trained as English speaking guides and Palawan has implemented an aggressive anti-littering program; the first littering fine is 200pesos, then 500pesos, and a third offense leads to a punishing two months in jail. Keeping the island clean is a priority.

After visiting the famous underground river the first day, we went on a city tour with Amika Tours and Travel to view sights in an around Puerto Princessa. At Binuatan Creations, both George and I took turns on a loom and learned to change individual natural fibers into cloth at the weaving station. After drying fibers like acacia and grass, the fabric is dyed into every color of the rainbow. As with most of this city tour, each stop was also an opportunity for shopping. At Baker’s Hill, we learned about the famous Hopia bread made with ube or mongo, and saw several statue animals in this small “theme” park. We had a quick stop at Mitra Ranch to take in the great views and shoot photos.

The crocodile farm seemed more like a jail with large animals cooped up in small empty pens except for water. The largest crocodile, Senor Croc, is over sixty years old, weighs over six hundred kilos and measures seventeen feet long; he has been a resident for over twenty years. His abode is just past the hatching house. A violent crocodile, Valentino, was captured last year on Valentine’s Day in Southern Palawan and was locked up as he was a danger to society. I learned that saltwater crocs are even more dangerous.

After traveling through the city in the forest, we arrived at Iwahig Minimum Security Prison and penal farm. Many of the inmates work on the farm but a few prisoners work in the shop and are known as the Iwahig Dancing Inmates. The Philippines has a tradition of dancing convicts as in Cebu one Saturday a month, nearly one thousand inmates show off their style dancing in unison to Michael Jackson’s Thriller. I hula hooped while Juris from Cebu, Sandy and Allan from Manila, Dennis from Laoag, Pallet Jr from Laguna and Abraham from Aparri danced around me in a circle to Psy’s song “Gangnam Style.”

READ THE FULL ARTICLE on the Jewish Journal: Click here!

Three Months in Thailand: One Year on the Road
Myanmar: Monks on Mopeds in Mandalay (video)
Penghu: The Hawaii of Taiwan?
Continuing along the romantic Danube with Viking River Cruises