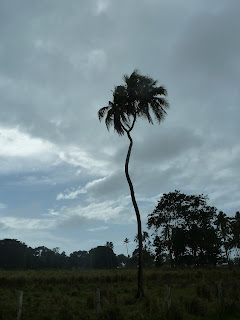 After three glorious weeks on the beautiful islands of Samoa, we boarded the two hour Air Pacific flight from Apia to Nadi in Fiji, the most convenient access point for Tonga. We noticed there that the onward flight from Nadi to Nukalofa, Tongatapu was likely delayed and could not seem to get any accurate information from anyone.  No big surprise, just another typical traveling experience.

Suddenly, we heard an announcement stating, “Air Pacific Flight FJ211 to Tonga will be boarding shortly.”  I turned to Lisa and said, “I guess we can wonder around the shops for a while.”  Literally as these words left my mouth a second announcement trumpeted, “Passengers on flight FJ211 to Tonga, please proceed to the departure gate.”  I gazed somewhat dumbfounded toward my wife who stated, “They have to announce that they will be boarding the plane before they can board it.”  Ah, that explained the heads-up advisory seconds before the actual boarding announcement.

The flight to the island of Tongatapu was scheduled to last an hour and thirty minutes.   A few massive Samoan passengers among us were also boarding and I quietly prayed that none of these giant people, who should really have two seats each, would be placed next to us.  Thankfully, a quite delicate great grandmother from Oregon but who had been living in Taveuni, Fiji sat next to me.  She was loquacious and amiable and informed us, “I have to make this same trip every four months because I cannot get residency in Fiji.  I think it is because I am too old.  I purchased a plot on Taveuni but now I’ll have to sell it and move back to Oregon.”  I listened to her story and thought that she was quite gutsy for a lady of her age. Later I tackled a Suduko puzzle and read some of “The Girl With the Dragon Tattoo”.

It was then that the pilot announced that we would be arriving shortly in Nukualofa and that the flight attendants should prepare the passengers for landing.  While Lisa dozed, catching flies with her mouth agape, I watched the plane descend in darkness toward the well-lit airstrip. The next thing I knew, we were ascending back into the clouds and night.  The pilot spoke over the intercom, “The conditions are such that we were unable to land the plane.  So, we are going to swing around and try again from another angle.”

I sat in my seat and tightened the belt buckle.  I waited and hoped that our second attempt would be successful.  We again approached the runway and it seemed that we almost touched down on the tarmac and suddenly, vroom!, we zoomed up at a steep angle.  I tightened my belt even more and looked at Lisa, who was still asleep.  I thought, “No point in waking her up for this.”  After the pilot abandoned the third attempt I began to question if he had the confidence and ability to land the airplane.  He had not spoken to the passengers since the first failed attempt.  I was concerned and slightly frightened.  Finally, on the fourth attempt we landed, skidding, and slowed.  The passengers rightfully applauded the pilot and the Tongans ended their prayers.

Our next challenge was getting through Immigration.  We stood near the end of the line because we boarded an airport shuttle thinking that the baggage claim area was far. But the vehicle came to pick us up only due to the heavy rain, the same reason that the aircraft had such difficultly landing.  I later acquired this information from a Tongan lady at the airport candy shop. This line was not terribly long but with Chinese and Tongans cutting into it we were at a standstill for a good 45 minutes.  The Chinese seemed to proceed via both the foreign and Tongan lines, and even utilized the “disabled and elderly” queue, although the majority of them appeared to be in their thirties and were traveling with children. 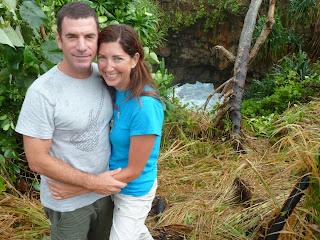 Finally, after an hour, we cleared Immigration.  Our bags were sitting there already and our hostel pickup service was ready to head into town.  It was already well after 8:00pm due to the delays and night had fallen.  We were greeted by Peter, who held a Toni’s Guesthouse sign and sported a massive goiter on his neck.  We entered the van with about a half dozen travelers, all who were to stay at Toni’s Guesthouse.  After roughly ten minutes, Peter stated, “Everyone will get out here and Toni will take you the rest of the way.  I am going back to the airport to get more people”.  We looked at each other somewhat shocked;  it was still raining.  But all the tourists followed his instructions. Toni arrived in another van within a minute so we did not get terribly wet.

Toni was quite a character with his strong Liverpool accent.  He advised, “Tomorrow is Sunday and everything will be closed.  So if you want, we can stop at a shop and pick up food for tomorrow.”  We all agreed that it was a good idea even though I knew the Chinese restaurants would still be open.  At the shop we purchased eggs, peanut butter, crackers, canned pineapple, bottled water, coke, cup-o-noodles, and milk for our cereal.  We re-boarded the van and a lady with a draconian accent ordered Lisa, “You will close the window.”  Lisa either did not hear her or chose to ignore the instruction. Dracula repeated loudly, “You will close the window!”  Lisa said, “No.  I need the fresh air.”  The lady growled to herself and muttered, “She won’t close the window” under her breath.  Then she began sniffling, an indication that she was falling ill.

We subsequently discovered that this lady, a Ukrainian, verbally and almost physically attacked another girl the following morning whom she mistook for Lisa.  The victim, Jackie, was at first stunned by these unwarranted attacks and then was able to ameliorate the situation when she realized that the whole affair was a misunderstanding.

At any rate, after Toni turned off the main road, swerving to avoid a cluster of potholes, he asked who was staying in the green house.  We were not sure what he meant but Lisa said, “We booked online but I’m not sure what color house we are staying in.”  Toni said, “Well, what’s your name?”  “Rajna?”  “No.”  “Niver?”  “No.”  “Lisa?” “Yes, Lisa, you will be in the green house.  A couple, right?”  Right.

We dropped off a Finish couple and the other solo travelers at the blue house.  We thought that we were heading to the upscale green house.  Then Toni stated as if factually, “So there are only two of you left, right?”  I did not say anything even though the Dracula lady was still with us.  He asked again, “So there are only two, right?  I can’t see back there since I’m driving.”  A Tongan girl who accompanied Toni finally said, “There are three.”  “Three!,” he shouted.  “How can there be three?  Who else is there?  Hello?  Where are you staying?”  Unfortunately for Toni, Dracula did not understand him. Toni briefly stopped the car, exasperated.  He turned to see who was left.  When he noticed the Dracula lady he yelled, “For Christ’s sake!  She’s already staying with us.  We’ll drop her off with her bags, that’s where she needs to be!”

We debarked at the green house.  The Tongan girl in the van showed us to our room.  We had requested a room with a private bathroom; the ugly brick room that we were shown had the toilet and shower outside the room and open toward the courtyard, not at all an en suite arrangement.  I must have looked disappointed because the Tongan girl said, “This room is not very nice.”  I said, “No, it’s not very nice.”  She followed with, “The yellow house is much nicer.  I think that it would be better for you two.”  I asked, “Is it available?”  She said, “It is available but it costs 40TOP and the green house is 30TOP (about $5 US more).  I requested to see the room in the yellow house.  It was much nicer, an actual home.  We took the larger room that shared the bathroom since no one else was there and being that the country shuts down on Sundays, we knew that no one would be there until Monday at the earliest.

We requested a towel, key, and matches that were not wet so we could heat water in the morning. The helpful Tongan girl brought us everything we asked for and mentioned that Toni was going to have an island tour that would depart at 10:00am.  Since everything was closed on Sunday, we deemed it a good idea and agreed to head out on the tour even though I generally detest tours.  After she left us, I poured us two rum and cokes with the duty free alcohol that I had purchased in Fiji and we toasted to our “safe” arrival and laughed that after three weeks of sleeping in beach fales (Samoan beach huts) that we had a three-bedroom, two-bathroom house to ourselves, with photos of two children placed above the television entertainment center.

I thought, if this arrival was any indication of our upcoming Tonga experience, we were in store for quite a ride.

Author’s Note: George and I hope that everyone is safe after Hurricane Irene. Sending our best to family and friends on the East Coast who weathered the storm.


For those in Los Angeles, hope to see you Sept 6 for a travel book reading by Rachel Friedman. Save the date, Oct 18, for our LA event which is part of the National Event for Meet Plan Go happening in 17 cities across the USA on the same night!

We started to upload our videos from this summer, more to come!! Check out our channel: http://www.youtube.com/user/WeSaidGoTravel

Gold SATW for Ken Budd
Did I love sailing on the Carnival Breeze?
USA Today: Holiday Attractions of Los Angeles
Palau: At the Edge of Paradise