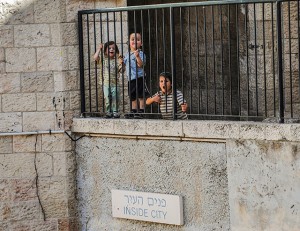 Shortly after accepting a full-time job at the French Theatre of Rome, I was invited to replace an employee – too far into pregnancy – on a secret destination journey. My friend and now boss, Fred, had planned this surprise to reward his team members for their hard work and success of the musical Sans Papiers: 80000 tickets sold in over 80 Italian cities during the 2011/2012 tour. So instead of sweating in my new office, I joined in!

On the morning of June 5th, 2012, Fred’s beautiful wife dropped us off at Fiumicino airport. Aside from our guesses, we still didn’t know for sure where we were headed, so Fred let out a hint:
“Exactly 45 years ago, the Arab countries forced Israel to fight a war. It only took us six days to win and make them vanish!” He sniggered.
Considering his strong Jewish identity and passion for Israel, we weren’t too astonished – yet not less excited – when queuing to check-in for Tel Aviv.

Beppe’s olive skin, dark curly hair, and thick beard cost us a good half hour interrogatory, but we eventually made it through the Israeli customs, and rented a big enough car that would hold us all. Automatically, we picked our strategic positions for the week: Rémi and I rushed to the back to continue to laugh; Beppe, Vicky and Ele occupied the middle bench seat, Robby held the country map up front, and Fred cheerfully drove along the roads of his past.

We first stopped at Fred’s dear friends, Françoise and Jean, who had kindly offered to host us for the night. As we arrived in front of a little green gate, Fred pushed its black handle, and we followed him through a short passage that led to the main entrance. We rang the doorbell. A few seconds later, Françoise affectionately embraced our boss, and her large family appeared in the background: husband, children, and grandchildren gave us a warm welcome, and then quickly took our suitcases to the top of the wooden staircase.

“Tell them to go help themselves at the buffet.” Françoise told Fred in a Southern French accent that he rapidly translated to Italian.

On a blue and yellow tablecloth, Françoise had arranged traditional dishes loyal to kashrut or kosher (Jewish dietary laws). Also common to the Middle Eastern and Mediterranean cuisines, these included many colorful delights: pita bread, carrots, and celery to dip in a bowl of hummus, eggplant salad with mayonnaise, fried falafel and matzah balls, ptitim – or Israeli couscous – with tomato sauce… It was not even 6 p.m., but each of us grabbed a plastic plate, filled it thoroughly, and moved to the white table dressed outside in the patio.

Originally from Nice, Françoise and Jean had moved to Israel with their three children in 1991.
“As Jewish, we never questioned our choice; as parents we inevitably did.” Françoise revealed with a semi smile upon her face.
“Why?” I wondered.
“When a bus filled with kids returning from school explodes in the nearby street; when you could’ve spared your children with the military service, and end up sending them to Gaza instead; believe me, you begin to wonder whether Israel was a selfish choice.” While others were cracking jokes on the opposite side of the table, Françoise’s youngest daughter, Audrey, carefully listened.
“Either way, our children would’ve never accepted to leave. Israel is their home, their culture. Hebrew is their language, you understand?” I understood. My parents had also done a move from France to Italy in 1991. Still, it was different: we weren’t tied to a religion or a language. We spoke English and French at home, and attended international schools in Rome – a very safe city.
“How was the military service?” I asked Audrey who was about my age.
“Incredible. I had the time of my life, really!” She exclaimed.
You, with such innocent features! How could you have the time of your life with a gun in hand? I was shocked. Shocked and impressed. Because, despite the violence – that I don’t intend to diminish – there was some inspiring beauty to this: a beauty that my multicultural background would never enable me to fully seize or feel. Israel goes beyond the waving of a flag in the name of nationalism; it is about people, who – loyal to their religious and cultural ideals – crossed borders to stand together in a crowd before history’s uncertainties.

About the Author: Julie Beretta: With her multicultural French, American and Italian origins, Julie has always been a dedicated traveler. Since she discovered the sharing of her stories enabled her to travel some more, she also became a passionate writer – who now mainly strives to travel so she can write; and write so she can travel more.

Antigua, Guatemala: We're all Handicapped
France: Awe and Tears at the Zoo
Winners: Independence Writing Contest 2014
California: My trip to the city of Angels

9 responses to “Israel is Real”