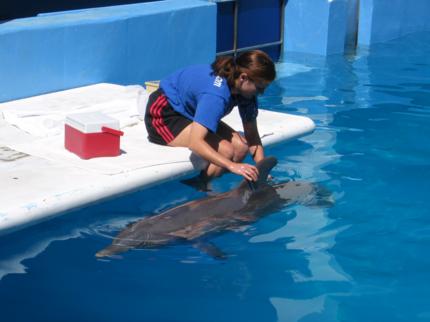 Winter, for some visitors to Clearwater Beach, Florida is a season to escape but for others, especially those in need of inspiration, she’s an animal to seek out.

Named for the season in which she was rescued, Winter is an eight-year-old dolphin who inspires child amputees, Iraqi war vets and medical researchers interested in recent developments in prosthetic limbs.

At two months old, Winter got caught in a crab trap. By the time rescuers from the Clearwater Marine Aquarium found her, she was not expected to last the night, so severe were her cuts from the trap ropes. Fifty percent of the staff voted to euthanize her, but Winter persevered, minus her tail.

The plucky dolphin started swimming like a fish until experts realized these movements would cause spinal damage. Next came the series of prosthetic tails to match her growth spurts and Winter learning to swim all over again.

As a result of her unfortunate accident and amazing recovery, Winter has become a movie star and a media sensation appearing on “Good Morning America”.

Everyday, visitors to the Clearwater Marine Aquarium can watch Winter interacting with her trainer, Allie Stone, as she adjusts to her new tails. The latest one features a stainless steel joint that propels her forward.

To the delight of Winter and her fans, Allie turns the exercise into a play session. Winter swims around the pool for a few minutes before returning to Allie for pettings and a few adjustments. She appears happy with the new appendage, ducking away when Allie tries to remove it.

Totally impressed with the show, visitors including children, have been donating toys to the dolphins and money to build Winter’s new home. The larger, circular pool allows Winter to swim continuously and provide a hospital emergency room for other rescued sea mammals like her dolphin friend, Nicholas.

Nicholas, a 375 – pound victim of severe sunburn caused by beaching, has been at the aquarium since he was orphaned at six months. Today, he shimmies around the pool in a series of comical forward thrusts while maintaining an upright position.

Spectators reach out to pet him before he darts away to grab a fish from Allie. The dark streaks running from his forehead to his dorsal fin are the only evidence of his life threatening sun exposure.

The show’s grand finale finds Nicholas competing with Rudy, a younger male dolphin, to see who can jump the highest and create the biggest splash, soaking the bolder kids who hug the edge of the pool. Who needs theme parks when young and old alike can enjoy the antics of these mammals at a fraction of the price while supporting a good cause?

Clearwater’s love and respect for her dolphins is also evident in the attitude of her tour boat operators. As a static burst of the ship’s radio advises of dolphin spottings at our six o’clock position, northern tourists rush to the back of the boat, anxiously scanning the powder blue and aqua horizon.

“Dolphins are highly intelligent creatures and sometimes they’re just not in the mood to play. If that’s the case, we’re moving on”, Captain Jack announces.

Fortunately, the duo, lured by the wake of the 40 – foot tug seem eager to follow, albeit from a safe distance. Moving along, Captain Jack reminds us of the strict rules protecting Florida dolphins.

Respecting the dolphins makes good business sense. If these Atlantic bottlenose feel threatened or pursued, they will abandon the area, or worse, beach their young. Most times, according to Captain Jack, the dolphins are happy to play in the wake of the boats and seem almost as curious about the visitors as they are about them. Indeed, scientists have made underwater recordings of dolphins mimicking the delighted squeals of tourists.

While visitors will never see Winter or Nicholas performing on the larger stage of Clearwater Bay, successfully rehabilitated dolphins like Rudy, who have retained their hunting skills, will be playing here for years to come thanks to the staff of the Clearwater Marine Aquarium and the generous donations of loyal fans.

About the Author: Sherel Purcell publishes travel stories in North American magazines, newspapers and large websites. She has won editorial awards from Parenting Publications of America and teaches writing when not traveling. She is the co founder of ActiveCityTravel.com.

Want to Learn a Language Before You Travel? It Just Got Easier
Do the Things You Believe You Cannot Do: NOW
Dancing to Freedom!
Thailand: A Random Act of Kindness