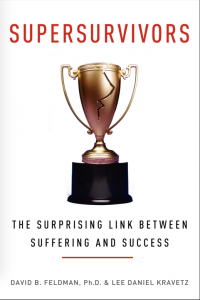 Do you wonder how you will survive something unexpected? 2014 did not go the way I expected. It was a real rollercoaster but 2015 has been better and I expect 2016 to be FANTASTIC! I hope you will share your story of gratitude in my Travel Writing Contest.

I wanted to share some quotes fromDavid Feldman and Lee Daniel Kravetz ‘s book, Supersurvivors: The Surprising Link Between Suffering and Success. I appreciated learning about the stories of Supersurvivors and how we can all be super.

“Suffering is real, but resilience is also real. It is an incredible and encouraging fact about human nature that, contrary to popular belief, after a period of emotional turmoil, most trauma survivors eventually recover and return to their lives. They bounce back….Their stories betray their utter humanness—their stumbling and their grasping as they wrestle with the fundamental questions we all face: Who am I? What do I believe in? And most important, how should I live my life?”

I found it shocking when Feldman and Lee wrote: “the disorientation and groundlessness experienced by many people after trauma can ultimately be advantageous.”

What we call the beginning is often the end. And to make an end is to make a beginning. The end is where we start from. —T. S. ELIOT

What do you need to move forward? “Grounded hope, an approach to life involving building one’s choices on a firm understanding of reality…Stop thinking positively and start thinking realistically, to avoid the comforting fiction that “everything will be fine,” and instead bravely to ask, “What now?””

“Giving up is sometimes the only way to move forward. Truly accepting the consequences of a trauma with realistic thinking rather than delusional positive thinking can open people up to true hope—something that enables setting and achieving goals that ultimately can improve one’s life…Denying or distorting a bad situation may be comforting in the short term, but it’s potentially harmful in the long run because it will be almost impossible to solve a problem unless you first admit you have one.”

I would rather walk with a friend in the dark than alone in the light.

“Forgiveness is giving up the hope that the past could be any different…Forgiveness means breaking the psychological ties that bind you to the past, giving up the quest to change what has already happened…Rather than dwelling on the past, she found herself asking the hopeful and forward-looking question ‘What now?'”

“As much as we might yearn for a life without pain, without suffering, without adversity, we realize we’re asking the impossible. We must make choices—sometimes difficult, sometimes easy—based on what life puts in front of us. But we know how to survive these trials, and how to thrive despite them—or perhaps because of them. It’s part of who we are. Life is worth embracing in part because of our ability to transform suffering into triumph and setbacks into successes. Supersurvival isn’t a magic bullet that makes everything instantly better. It’s not something we do that solves all our problems forever. In a way, life is a constant process of supersurvival, of facing life’s seemingly impossible choices with honesty and faith in ourselves. It’s a capacity all of us share. It’s the capacity to hope.”

Did you like my selected quotes from David Feldman and Lee Daniel Kravetz ‘s book, Supersurvivors: The Surprising Link Between Suffering and Success. I hope you will read the whole book and share your story of resilience in my Travel Writing Contest.