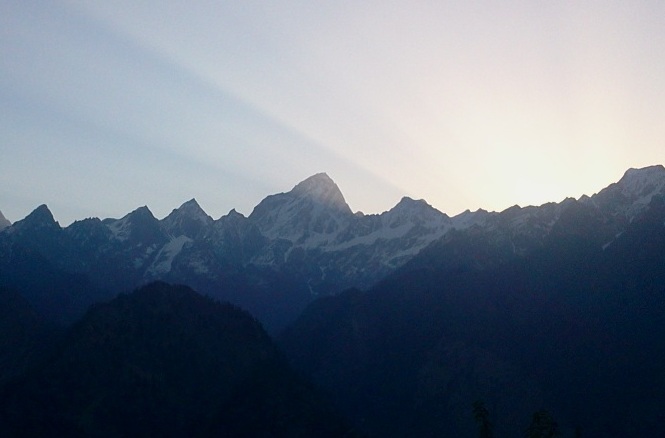 It had rained all through the night and though the dawn opened dull and damp, as the morning gained momentum, the mood of the mountain improved substantially.

The steep rise to the ridge through a bridle path bordered with prickly bushes and punctuated by silvery streams had taken a toll on my city-bred system used to elevators and escalators. But after reaching the vantage point, as I lay on a small patch of rain-fed green on the shoulder of the hill, the accumulated exhaustion, simply evaporated. Soaking in a sea of stillness and serenity, I was slowly rediscovering my robbed energies as around me the seconds ran, the minutes jogged and an hour absentmindedly ambled along.

Centuries-old maples swayed and softly spoke to each other, their voices rippling over me like a mountain stream. And in the in-between spaces, a momentum less breeze, drugged with unseen droplets sleepily dragged itself from tree to tree, carrying the messages.

The sky was a milieu of brilliant blue and resting against it were some of the highest peaks on the planet, for a view of which I had willingly undertaken the 40-hour long tedious journey from the plains to the high altitude Himalayan hamlet of Lata, nestling in the shadow of the eternal snows.

“Didi (sister) look! That is Nanda Devi, our Mother Goddess!” Birju, my guide, suddenly gushes as he points towards a cloud-veiled proud pinnacle, the colossal façade glowing golden in the nascent sunshine.

“The clouds are chayya mayya – a magic veil meant to protect her from the onslaught of sunlight. It is only the blessed few who get a glimpse of her bare face.” His voice reinforced with firm belief, rings in my ears and slowly seeps into my soul.

Here in the Himalayas, the peaks are more than just a juxtapose of rocks and snow, but ancient aspirations divinized. The Nanda Devi is regarded as the female manifestation of the supreme Shakti or power. In the entire region, the lives of Birju and others like him revolve around the dictates of the Devi -one of which conditions men to look upon the gentler gender as mortal extensions of the goddess- to be nurtured and revered, not objects of lust to be taken advantage of in moments of weakness. And right now even though it is only the two of us at the lonely mountain top and the nearest human habitat is 5 kms away, I don’t feel one bit unsafe. 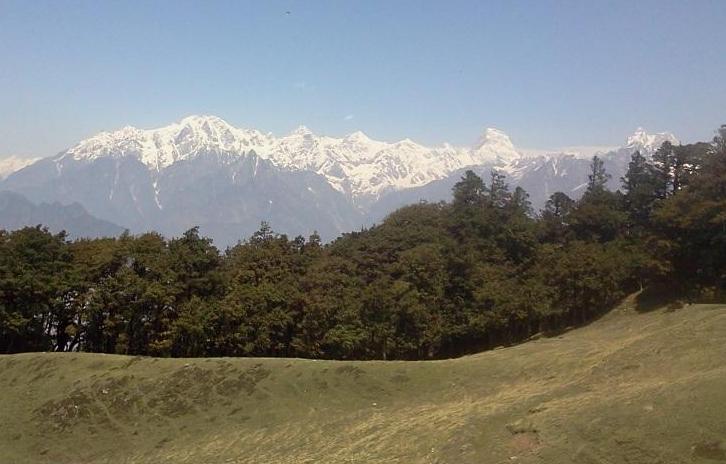 Life in an Indian metro for a single working woman, though appears lucrative to many, is actually akin to walking a tightrope. To the nosy neighbours, I am a suspicious character, dwelling outside the standard boundaries of the society. And at workplace, the attitudes of most male colleagues make me feel as if I am carrying a tag “available.”

But up here in the mountains, I feel truly liberated, and close to God. The people, especially the men folk, engage but don’t intrude, their concern for my well- being overrides the initial curiosity about my coordinates and companions, or rather lack of them.

“Didi, see over there!” as Birju calls out, I turn west and shiver in ecstasy, for the spectacle that enfolds before me is magic, sheer magic.

The playful clouds have shifted position and gone after the sun, liberating Nanda Devi who now lifts her veil and gives me a darshan (view of the divine) of her full glory.

A pyramid of pristine white, the pinnacle dyed a dying rose and totally untouched by the miseries that grovel at her feet. The very sight lifts the soul to limitless heights and unknowingly, the trivialities and drudgeries of daily existence pale into insignificance.

With a cleansed and healed mind I effortlessly touch the tune of eternity, the experience and understanding of which I hope will remain with me after I descend from the attained heights into the dusty drop of the plains where I know I have to return.

About the Author: Sriparna Saha: An architect and travel writer who loves to draw pen pictures more than plans and perspectives.