Halloween Special: The Land of Dracula

Vlad Tepes (the Impaler) has been “confused” with the blood-sucking vampire Dracula thanks to Bram Stocker’s novel. However, Vlad , the Price of Wallachia, was not a vampire. Yes, he was considered cruel and he was fared. 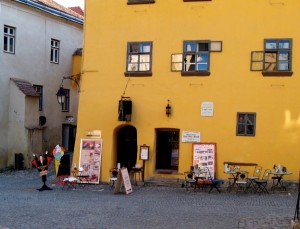 Vlad was born in Sighisoara . That’s a fact. The house is still standing and can be visited albeit now is a restaurant [pictured here]. Please excuse the vampire at the entrance.

During the first reign of his father, Vlad II Dracul, Vlad Tepes has spent time in Targoviste, the capital of Wallachia at that time. Yes, the historical sites can still be visited.

After some problems with Matthias Corvinus, Vlad ended up being in imprisonment in Visegrad near Buda (Hungary).

While the exact location of his death is uncertain, some say his body – without the head which was taken to the Turks – is buried at Comana monastery (the monastery was demolished then rebuilt from scratch). Others say that Vlad was buried at Snagov – but there is no historical proof of this.

Poienari Castle is linked to Vlad Tepes. It is believed to be the “real” castle Dracula from the above mentioned novel. In reality, Poienari has been erected by the rulers of Wallachia in the 13th century and by the 14th century it was the main citadel of the Basarab rulers. It was left in ruins but Vlad saw the potential of the location and rebuilt it. And it became his main fortress, being also used after his death in 1476. Eventually, it was abandoned again.

Today, Poienari Castle is one of the main sights on Transfagarasan Road, one of the most scenic roads in Europe. Pay attention that the road is only open during summer. It official closes on October 31 but traffic restrictions may exist before that due to the weather.

And the myth: Bran Castle has absolutely nothing to do with Vlad. He has never been there.

Where do tourists go for a scary Halloween in Romania? You got it: Bran Castle. Although the historical link is not there.

How about forget the myth and go for the history? If you fly into Budapest , you can visit Visegrad, which is a small castle town in Hungary located north of the capital. From there, catch a train to Sighisoara. And then rent a car to drive on Transfagarasan, stopping to visit Poienari. Travel back to Bucharest to fly out (or maybe even fly out of Sibiu).

Photo by Traveling Cricket and may not be used without permission.

Italy: Blood and Sacrifice Part I
Do You Want Your Travel to Australia to be Easy and Delicious?
Memorable Moments in Rwanda
The Philippines: 100 Travel Tips