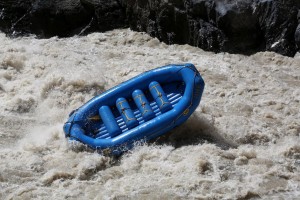 Walking down a vacant road on the way to Padum, capital of the ancient kingdom of Zanskar, about five kilometers off the river, I pass a Tibetan monk with his distinctive red kasaya wrapped obliquely about his shoulders. He stops, and in halting English asks my age. When I tell him, he looks me in the eyes and says, “Ah, you have short life left.”

It’s a daunting thought, as we are on the roof of the world, close to heaven, and about to enter the Zanskar Gorge, one of the most remote canyons on the planet, 11,000’ feet high, surging with ice-cold water from the Himalayan glaciers that feed this wild rift.

This is a reunion trip of sorts. It’s the first time George Wendt, John Yost and I have traveled together in the 40 years since we founded Sobek (the other founder, Lew Greenwald, drowned on the Blue Nile in 1975). Though a team from Sobek first descended the Zanskar in 1978, Kashmir, with its troubled border with Pakistan, soon afterwards closed to foreign travelers, and the river ran wordlessly for over 20 years. John first rafted the Zanskar in 2007, and has made yearly pilgrimages since. This is his 7th descent, and John invited his old partners, and we brought along a cadre of friends and fellow rafters. 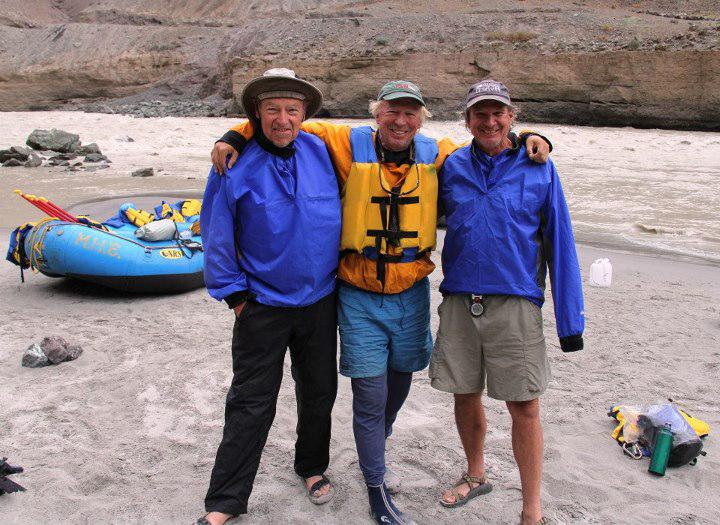 This is not an easy place to get to. I flew Turkish Airlines to Istanbul, overnighted and then continued to Delhi for a total of 20 hours in the air. Then we all flew to Srinagar at the nubbin at the top India and overnighted on a cedar houseboat on Lake Dal. Then a three-day hard drive over steep, crumbling mountain pass roads, where a glance downwards sometimes revealed the skeleton of an unlucky bus or truck. We passed through the town of Drass, which seductively bills itself as “The Second Coldest Inhabited Place on Earth,” and Kargil, site of the 1999 conflict with Pakistan that saw over 1000 killed from both sides. Now the town is lined on the northern side with high concrete “shelling walls” so vehicles and passersby can hug the edge and avoid incoming rockets or gunfire.

We passed bearded goats that look like little devils, pine martens, hyraxes, and the ultimate Scrabble word, dzos, the offspring of yaks and cows.

Before descending into the Zanskar Valley we trundled over the 14,600’ Panzila Pass, camped between the snowy tonsure of the twin 23,000’ peaks of Nun and Kun, and visited various chortens and gompas, turning the many prayer wheels, seeking blessings for our endeavor.

We finally launched at 11,930’ on the Doda, a tributary draining the giant Darang Durong glacier, and which joins with the Tsarap to create the Zanskar (the Zanskar never gets below 11,000’), and paddled half a day to our first camp at the base of the Karsha Gompa, a Buddhist monastery that is stacked up the mountain like a birthday cake. It is here I met my monk. 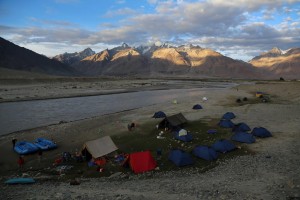 First Camp on the Doda, photo by John Lyddon

That night John gives his quotidian briefing. He speaks in little archipelagos of thought. “I’m sorry we forgot one of the tables, but we’ll think of something. And tomorrow there is a Class V rapid that was created two years ago from a road blast. I’m not even sure we can walk around.”

This news worries and riles. One of the members, a Himalayan high-altitude expert and his wife, approach the bench. “John, if we had known there was a class V rapid, we would not have come. We expect you will find a way for us to walk around.”

John is suffering from some sort of flu, and doesn’t have the strength to argue. “We’ll figure something out.”

The next day we leave civilization behind, carrying everything we will need for the passage, including a half-dozen live chickens riding atop one of the rafts. The Nepalese guide for the chicken raft is good, and glides through the first rapids with virtuoso artistry. It is, from my vantage in the next raft, poultry in motion.

We enter the gorge, dark and sheer. It swallows the sunlight. The walls swirl with different colored dikes and aplites, discordant swarms of magma that cut through and across strata in patterns that look as though the walls swallowed hallucinogens. We run a few chilly rapids, and then pull over at a small eddy. We scramble up to a dirt road, and walk a couple hundred meters downstream where a deep-throated roar ricochets around the locked canyon. It is at this point the road-builders set off a stack of dynamite that didn’t go as planned. It triggered an avalanche that threw a house-sized boulder into the river, pressing the flow against the opposite bank, and creating a powerful sluice that erupts into a huge, re-circulating hole, a potential killer. The blast also buried a bulldozer, and at the edge of the road the yellow frame of the earthmover is partially exposed. A little further down in the rubble, our guide tells us, is the driver, who was cut in half with the detonation. John has named this rapid “Jackhammer.”

The road is blocked ahead, ending in a hummock of blast debris, and then an abrupt impassable cliff. But down below, at river’s edge, there is a fan of sharp rock behind the giant boulder that will make a hike-around possible, to everyone’s relief.

But as the guides try to line the people-less rafts around the rapid, one flips, with no consequences; but the bowline of a second raft, filled with gear, snaps, and the raft plunges downstream around the bend, a ghost boat into the maw. This could have consequences, as there is but one camp in the narrow gorge with enough level ground to hold the group, and it is just a few kilometers from here. The runaway raft has group and personal gear, tents, sleeping bags, food and medicinal alcohol, so this trip could transmute into an expedition if the boat cannot be retrieved in time. The guides, all young Nepalese, hastily line another raft around the rapid, and two of them hop in and start rowing madly downstream hoping to catch the fugitive. All the rest of us can do is scramble over the edged and acicular rock pile, re-load with double up the passengers squeezed into the remaining rafts, and hope, as we head downstream, we will rendezvous with the lost boys.

After a few rapids, and a few shadowy bends, we see the two guides waving frantically from a shoreline rock. How did they get there? Where are the rafts? It turns out they successfully rescued the runaway raft, pulled it to shore, and hiked upstream as far as possible to let us know.

The evening bleeds away the daylight as we celebrate at camp, local whiskey and brandy flowing. One of the Nepalese guides plays Justin Timberlake on his Samsung phone, amplified by inserting into a plastic cup. The nearest light we can see is the moon.

George Wendt, the founder/owner of O.A.R.S., is offering two departures for the Zanskar for 2013, both led by John Yost.