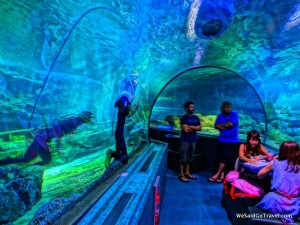 As our airplane descended toward Guam after departing Palau’s International airport in the wee hours of the morning, I reflected on how little I knew about the U.S. territory island called Guam. I knew the island of Guam, situated in eastern Micronesia, has had a strong U.S. military background; I also was aware that in the early 1960s – before I was born – my late mother was offered an elementary teaching position in Guam that she thankfully rejected in favor of remaining together with whom would eventually become my future father. I realized that my limited perceptions would be quickly morphed over the ten days that we would remain on Guam.

Tumon Bay is the center of Guam’s tourist infrastructure with modern hotels and stylish shopping malls. It would be difficult to beat lodging at the high rise Outrigger Guam Resort located on the eastern side of Tumon Bay with sparkling white sand beaches lining the lengthy coastline. The spacious rooms are modern and comfortable with outstanding ocean views elevated over the bay. Recommended is the upgrade to the Voyagers Club Lounge where guests enjoy a free tasty buffet breakfast from 7:00-10:00am and entrance to enjoy cocktails and hors d’oeuvres from 5:00-7:00pm nightly while taking in stellar views from the 21st floor overlooking Tumon Bay. 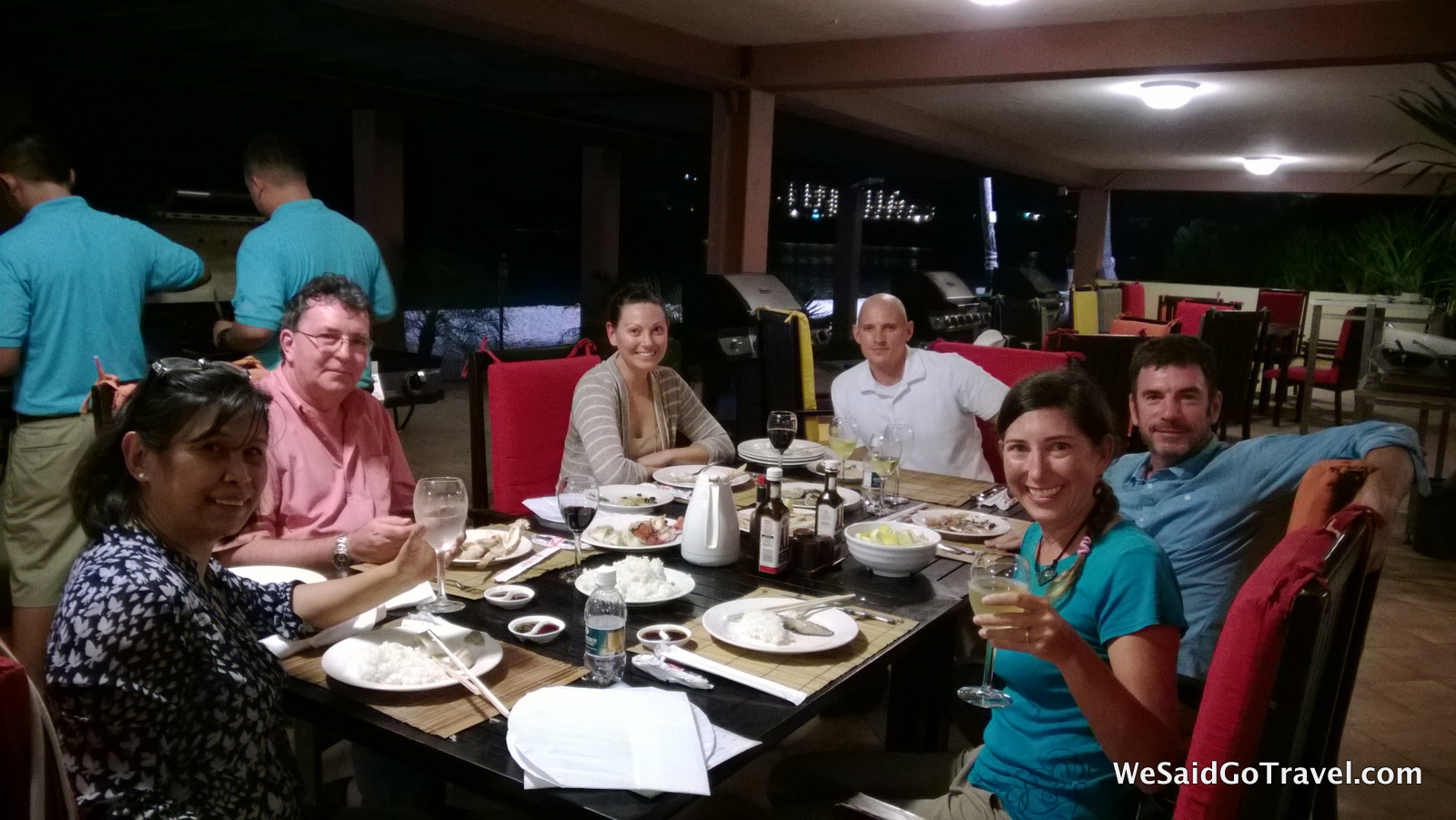 Water sports such as kayaking and paddleboats are available in front of the Outrigger Hotel. For a memorable dining experience, be sure to join the staff at the Outrigger Hotel for its “Beachside Barbeque Dinner” that offers a variety of Chamorro foods just off the beach. The opposite side of the bay offers excellent snorkeling just in front of the lifeguard station fronting Ypao Beach Park. The ocean here teems with schools of needle nose and other tropical fish that swim among the hard coral.

Located across the street from the Outrigger Guam Resort are a variety of fine shopping complexes such as the DFS Galleria that houses a variety of high-end designer boutique shops including Rolex, Cartier, Prada, and Armani.

Also adjacent to the Outrigger Hotel is Underwater World Guam, a large pristine aquarium where a variety of sharks, rays, turtles and tropical fish inhabit the spacious tunneled aquarium. It showcases over twenty sharks including black and white tip, leopard, and nurse sharks who menacingly bump large puffer fish and groupers that live among the schools of jackfish. Relaxed tourists can enjoy the aquarium seated underneath the tunnel with a cocktail in hand or the more daring can submerge themselves in the tank using the Sea Trek system that permits individuals to watch the aquatic world from within the tank 8-12 feet beneath the surface. Since the air is not compressed, travelers can fly within four hours of having swam with stingrays and a variety of sizeable sharks. 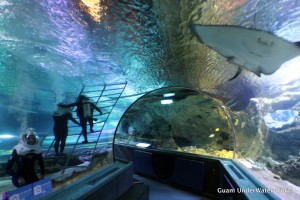 After enjoying the underwater aquatic life, be sure to dine at Sea Grill where fine filets of fish and tasty lobster is available in a room that overlooks the neon lit street below at night. Chamorro seasonings, spices, and sauces add unique flavors to quench demanding appetites.

Even though the Chamorro culture has diminished notably due to outside influences from the Spanish, Japanese, and Americans, the south east end of Guam near the village of Inalahan enables visitors to get a glimpse of the Chamorro culture’s past. During an hour tour with a local Chamorro guide, guests visit the Mariano and Ana Leon Guerrero home from 1901 where sixteen children once slept in a large room. We also learned the Chamorro removed seawater outside the reef – higher in salt content – to make sea salt that they used to trade and preserve food. The Chamorro people also used the coconut and let nothing go to waste. The leaves were woven into place mats, and baskets. Weaving sturdy rope was accomplished by using a manual machine that intertwines the rope fibers.

Outdoor activities away from the water that are available in Guam include a multitude of hikes around the island, concentrated in the southwest central region near Mount Lam Lam, the highest mountain on earth. How can it be the highest mountain on earth? It depends on how the measurements are calculated. If measuring from the bottom of the extremely deep Mariana Trench, even Mount Everest standing at 29,040 feet would be miles below the ocean surface while Mount Lam Lam stands 1,245 feet above sea level. We hiked down toward Sella Bay. The sea view was lovely with wild orchids growing just off the main trail. Due to heavy rain, the trail was slippery, making relatively short distances hard to cover. After traversing one of the many heat-soaked mountain trails, we recommend cooling off in one of many waterfalls situated around the island. Lower Sinisa Falls is well know and suggested.

As our time in Guam and Micronesia came to an end, I reflected about the beautiful aquatic life, the lush green setting, and the friendly local people who speak English as if they were born on the mainland United States. Having visited Micronesia for the first time to the islands of Palau and Guam, we became aware that other places in the region are worthwhile to visit such as the preserved culture on Yap, the manta diving off Chook, and the historical significance of Saipan and Tinian during WWII. 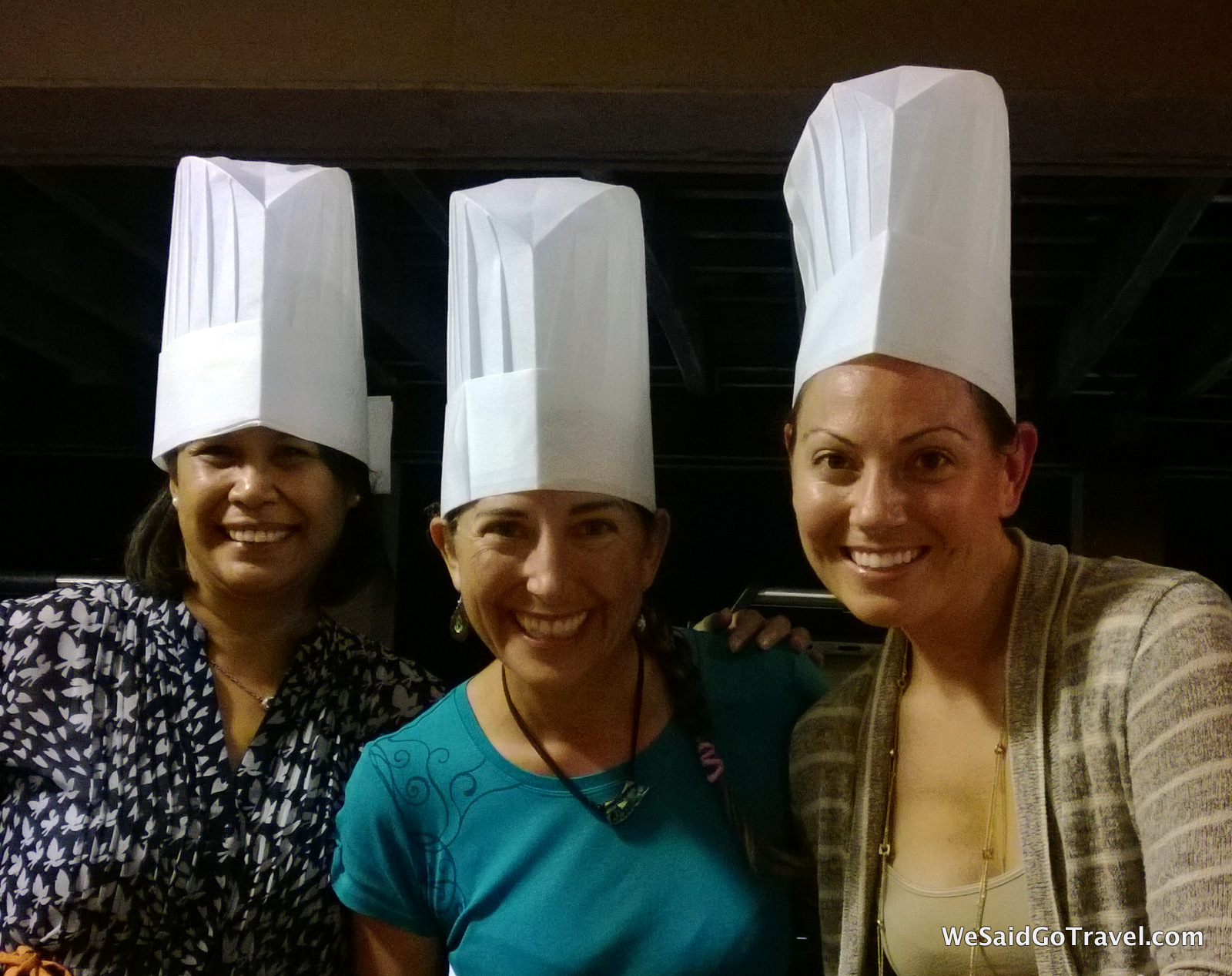 As we departed in the early morning to Oahu, I realized that we had only caught a glimpse of what Micronesia has to offer and look forward to come back and learn more about the region. Since Guam is the modern hub of the area for those traveling from the U.S., we look forward to spending our first few days in Guam, relaxing in style and enjoying fine dining at the Avenue Restaurant situated within the Outrigger Hotel Resort where delicious fresh fish, lobster and steak is served with accompanied vegetables and an extensive fresh salad bar. Then we will be tranquil and prepared to appreciate the more remote areas of Micronesia.

Guam Videos. Our next stay was at Outrigger Reef on the Beach in Oahu. We thank Outrigger Hotels and Resorts for inviting us! All opinions are our own and we cannot wait to go back!