Gratitude in Stone: The Pantheon, Paris 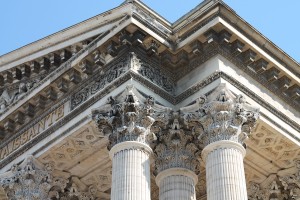 This Panthéon is gratitude made stone.

It started life as a church, built to honour St. Genevieve, the patron saint of Paris, in thanksgiving for her intercession during Louis XV’s illness. Since then, the Panthéon has been the site of Foucault’s demonstration of his pendulum, which showed the rotation of the earth, and the home of Rodin’s iconic sculpture, The Thinker. During various periods of religious and state upheaval in France, the Panthéon has reverted to its original religious function twice.

Now, most likely for the ages, the Panthéon is a secular mausoleum in which the great figures in French life – the military politics, science, literature, art – are interred by a special act of parliament. Above the entrance, the pale edifice proclaims ‘To the great men, the grateful homeland.’ This is gratitude on a grand scale.

Inside it is cool. The main chamber is lavishly decorated, with murals and balconies, neoclassical pillars and a wide, tiled floor. A replica of Foucault’s pendulum hangs from the ceiling, a polished gold-coloured sphere rotating slowly from a seemingly endless cord. The original is at the Musee des Arts et Metiers north of the Marais.

I look at Voltaire, at Rousseau, at Dumas, who was interred here only in 2002, 132 years after his death, under the presidency of Jacques Chirac. Chirac was also the person who unveiled a new plaque in 2007 to commemorate the Righteous Among the Nations, a status that Yad Vashem in Jerusalem bestows upon people who saved Jews during World War II. There are 2,600 names on the plaque. I think of their bravery, of sacrifice.

Some of the interned, such as Leon Gambetta, are represented among the greatest of their nation only by their heart, with the rest of their body buried elsewhere. Dutch admiral Jan Willem de Winter did the opposite – he let France have his bones but his heart is in the Netherlands. Others, like the Righteous Among the Nations, are honoured with a plaque and buried entirely elsewhere. Most interesting of all is the Marquis de Condorcet, whose remains were lost in the 1800s. A mathematician, abolitionist and passionate advocate for equality (unusually for the time, he was a proponant of rights for women), he died during the French Revolution. For the bicentennial, he was symbolically reinterred in the Panthéon, but his coffin is empty.

There are two women buried in the Panthéon. The first was Sophie Berthelot, the wife of renowned chemist Marcellin Berthelot, buried alongside him at his request. The second is Marie Curie, the first woman interred on her own merits. I think of the inscription outside – To the great men, the grateful homeland – and reflect that Marie Curie was not a man, and that France was not her homeland, and yet her memorial is the only one at which visitors have left flowers, bound together with curling ribbons. Some of the ribbons are red and white, the colours of the flag of her native Poland. Others are inscribed with Polish text. Her work with radium led to her premature death, but her research into radiotherapy has saved lives the world over. I think again of sacrifice, and of what my life as a woman in the twenty-first century owes to Marie Curie. She was the first woman to win a Nobel Prize and remains the only person to win a Nobel Prize in more than one scientific field. I spend a long time looking through the bars at her tomb, at the tributes in Polish colours in this, the most French of resting places.

Built in gratitude to a saint, re-dedicated in gratitude to scientists, artists, statesmen and the quiet heros of the Righteous, I have never been in a building quite like the Pantheon. I leave, blinking in the September sunshine, and look towards the green leaves of the Jardin du Luxembourg. Each evening when the doors close and the last of the tourists amble outside, I wonder if ghosts walk the cool halls in silence.
If they do, I wonder what they talk about.

About the Author: Ellen Brickley is a travel writer who lives in Dublin, Ireland. When she’s not working on a novel, she can be found on a quest to track down the best chai latte in Europe.

2 responses to “Gratitude in Stone: The Pantheon, Paris”