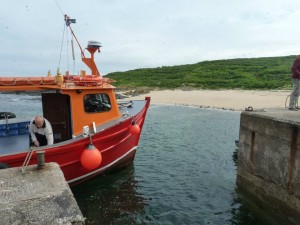 He didn’t want to go. He eyed the fishing boat doubtfully.
“What if it sinks?”
“It won’t.”
What if there’s a storm?”
I looked out to sea. It was as still as a millpond. “There won’t be.”
“I might get sick.”
“I doubt it.”
I might get blown overboard.”
I sighed. My son, Patrick, was stubborn – and his imagination knew no bounds. “I’ll make sure you won’t.”

We were standing on the jetty at Seahouses on the coast of Northumberland. Most people came to Seahouses to take a boat trip to the Farne Islands.
The Farne islands make up a chain of reefs that include the romantically named Knoxes Reef and the East and West Wideopens, joining up as one when the tide is at its lowest.

I nudged Patrick towards the steps that led down to the waiting vessel.
“Come on, Patrick. It’s perfectly safe.”
Patrick wasn’t about to give up. “Grace Darling had to save people who’d been ship-wrecked off Farne.”
“How do you know that?”
“My teacher told me.”
“Well … only because there was an almighty storm. Look out there. There’s hardly a ripple on the water.”
Patrick continued to drag his feet.
“Come on. We might see seals. They’re often swimming off-shore or basking on the rocks.”
“There might be sharks.”
It was pointless. I sighed and said, “Too late, we’ve bought the tickets.”

The boatman showed us the lighthouse where Grace Darling had lived and the site where she had rescued the ship-wrecked. So far Patrick hadn’t been sick – or fallen overboard. It didn’t look like we were going to sink either. He began to relax.

The boat made its way back to Inner Farne and the National Trust bird sanctuary.
“I can’t wait to see the puffins,” Patrick said.
“Hope you’ve got hats with you?” our boatman interjected with a glint in his eye. I wondered why: it wasn’t particularly cold. It wouldn’t be long before we’d find out.

We’d arrived on Inner Farne right in the middle of the breeding session. Hundreds and thousands of terns, guillemots, shags, cormorants and puffins were nesting. Some chicks had already hatched. It was a birder’s paradise – and soon to be our hell.
Climbing the steps up onto the Island, we began to comprehend the boatman’s question. Before long we felt a rush of air; then a sharp jab. A small black-hooded bird with blood-red beak and claws banked before swooping in again, its needle-thin beak at the ready: Peck, peck, peck.
Tens of Arctic Terns lined the edge of the pathway just inches from our feet. As we approached the nests the protective females rose up in attack. We clutched each other, our hoods up, our heads down, hands flapping, but still they came: circling, squawking, rushing at us.
“No one said we’d been invited as extras on a remake of Hitchcock’s ‘Birds’!” I cried.
We laughed hysterically, the Terns giving us an adrenalin rush to match all the thrills of the fun fair. When we tried to outrun the birds, they chased after us, swooping in around our heads, their pecking increasingly urgent and vicious.

Dashing for St Cuthbert chapel, we sought out sanctuary. In 676 St Cuthbert had introduced laws to protect the birds on the island – but today the saint was offering us humans no protection. As soon as we left the church again, the Terns were waiting, ready to ambush us with a new strategy.
Splat! Slimy bird poo slithered down our coats.

We continued on up the path, leaving the Terns behind. Over the rise and we found the altogether calmer puffins huddled in groups like old men on street corners. If the Arctic Terns were the stars of a Hitchcock horror film, the puffins were cartoon characters with their kohl-streaked eyes, chunky orange webbed feet and flinthead beaks. Some sat on the cliffs, peckers spilling silver sprats, whilst others flapped frantically in the air with their undersized wings before making awkward ‘upright’ landings.
The comerants were a mix of comedy and horror. They perched on high-rise twiggy nests, peering out from punk-like tufts. But really, they were the Lord Voldemorts of the bird world with their raven-black coats, snake-green eyes and poison-mustard markings oozing from their beaks. And when they extended their great black wings and flapped menacingly, there was no doubt: they were horror, not comedy.

“Mum,” Patrick said as we headed back down the hill towards our waiting boatman. “Can’t we stay overnight? Please? It’s wicked here.”

About the Author: Helen Moat spent her childhood squished between siblings in her Dad’s Morris Minor, travelling the length and breadth of Ireland. She’s still wandering. She blogs at: http://moathouse-moathouseblogspotcom.blogspot.co.uk/