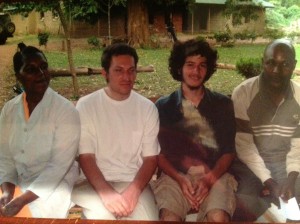 Our guide raised the roof of the jeep. Literally. It was not a pop- up roof, but needed to be lifted off the car to rest on four metal legs. The metal roof floated above our heads so we could stand and see the animals.

I had chosen to celebrate my 50th birthday on safari in Tanzania, with my husband Avi, and my young adult sons, Yshai and David. Lake Munyara was our first stop.
“Is this thing safe? It doesn’t look very sturdy”, questioned Yshai, the older of my sons.
The guide assured him.
“It is very very safe. It never fell, ever.”

We drove past the guard station in the late afternoon. This was our first view of the African Animal Kingdom. We heard screeching monkeys who scurried in and out of our line of vision. Their white derrières looked like vanishing blurs in our photos. We were standing, eagerly scanning the landscape; it was a combination of lush greenery, verdant forests, and open Savannas. It was beautiful. And we hadn’t even reached the lake.

Avi was the first to sit down, then Yshai, then me. That’s when I heard a noise from the back of the jeep. I turned around and saw that the roof that “never fell, ever” was sitting on David’s shoulders. His head was nowhere to be seen. I could only see his long, lank headless body. Yshai and I, between frenzied, panicked yells, tried to lift the roof. Adrenaline helped us succeed. Slowly David’s neck and then his head emerged. He looked dazed and had blood on his forehead.
“We need a doctor” I yelled. “He could have a concussion.”. Or go into a coma, or something worse” I thought.

David slowly brought his hand up to the back of his head, and pulled it away. The fingers were painted with blood. I immediately thought of his blood pouring out and sapping his strength. Yshai, Avi and I quickly inspected the back of his head through the layers of hair. The wound looked small but significant. The guide did not move.

“We need a doctor” I yelled louder. The guide appeared to awaken, and wanted to continue the safari as if nothing had happened.
“Turn the car around. Your roof fell on David’s head. We need help”. He finally understood and complied.

The guards at the station recommended a doctor not too far away. I smiled at them in gratitude. We left the park. The guide drove quickly.

The young, thin, black, African doctor, Steven, graduated from medical school in Moshi, Tanzania. His hospital was small; a building with three rooms, a structure resembling a portable trailer, a big lawn and a nurse. The doctor and nurse spoke English and wore white coats. He looked at David and gave his verdict.

“He needs stitches.”
We were in Africa, land of dirty needles, unsanitary condition and AIDS. We were living a tourist’s worst nightmare.
“Are you sure? Avi and I asked simultaneously.
“It’s advisable” he responded.
We agreed to the stitches, but no injections. David could hold my hand and squeeze his pain and discomfort into it.

“He’s young, he’ll be fine”, assured Dr Steven as he opened a drawer. I expected to see unprotected needles and thread come sliding out of it, ready to pierce my sons scalp.
Out came a long box. Dr Steven opened it carefully, and lovingly pulled out a clean, new, shiny pair of surgical gloves, which he proceeded to pull over his hands. They fit like a glove, as gloves should. I looked at Avi and Yshai and realized none of us were breathing. I set an example with a loud sigh.

Next came another box with a sewing kit, all wrapped in crinkly new plastic. He quietly warned my son, then started to sew. My kids have been patched up before, with large, crude stitches. But in his primitive surroundings, Dr. Steven performed artistry. In two short pulls of the thread with a metal, staplelike thread pulling gadget, David’s scalp was back in perfect condition. Dr Steven was our hero. Dr Steven was the best doctor in the world. Thank you, Dr. Steven.

Our African doctor put a clean bandage over the wound, attached it with crisscrossed adhesive tape to David’s hair, gave us two different kinds of medication to prevent infection and shook our hands. We asked how much it would cost.

“Twenty dollars would be fine”, he said. “The hospital would appreciate whatever you can give.”
We gave him fifty. And thanked him profusely.
“My pleasure” he replied.

We stopped off on our way to the airport after our successful safari expedition. We wanted only Doctor Steven to remove David’s stitches. And we wanted to express our gratitude to the world’s best doctor.

About the Author: Rona Amichai lives in Los Angeles. She is a speech language pathologist who loves to travel and write about her experiences. She can be reached through Facebook.

France: Awe and Tears at the Zoo
Tanzania: Freedom in Motion
South Africa: When Lovers Unite
Do You Love The Animals Of Africa?