This is an entry in the We Said Go Travel Writing Contest written by Gina Sloman from America. Thanks for your entry Gina!

When the sun sets in Granada, Spain, the day has just begun. Nestled between the Sierra Nevada Mountains and the sandy beaches of southern Spain, Granada is nothing short of a storybook. 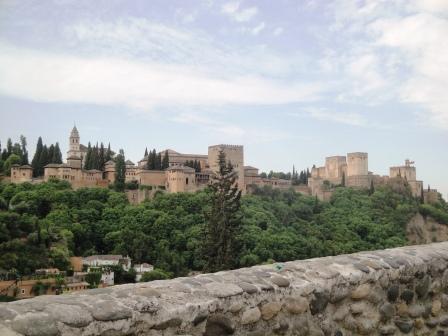 Tiny alleyways are filled with the sounds of men selling bread from the panederías(bakeries), small children in their school uniforms clasping to their mothers as they walk home from school, and college students enjoying a piping hot café con leche in between classes. A once thriving location to the Moorish community, Granada embraces the prominent culture of the past, and invites its people, as well as visitors, to enjoy the hundreds of Arabesque tea houses, tapestry shops, and of course the world famous Alhambra Palace. The magnificent Islamic palace is iconic of Granada; preserved and maintained so others can gawk at the detailed inscriptions, architecture, fountains and gardens that once belonged to Muslim princes of Spain. Across the way from the Alhambra you can find the Albaicín neighborhood; a neighborhood too narrow for cars, yet such a large part of history. At its peak is the Mirador de San Nicholas, an eye level view of the Alhambra, as well as breeding ground for many of Granada’s underground musicians, jewelry makers, and those who are looking for a place to unwind after a night of dancing in one of Granada’s many nightclubs. Tucked away in the Albaicínare the caves in which the Spanish Gypsies live, and often preform flamenco shows. Another feature of Granada that distinguishes it from other cities of Spain is the tapas. Tapas are small servings of food typical to Spain that are free only in the City of Granada, when a beverage is ordered.  The Granadinos (those local to Granada) will give you the insider scoop as to which tapas bars are the best. It is not uncommon to make a night of tapas bar hopping into an affordable, and delicious meal. 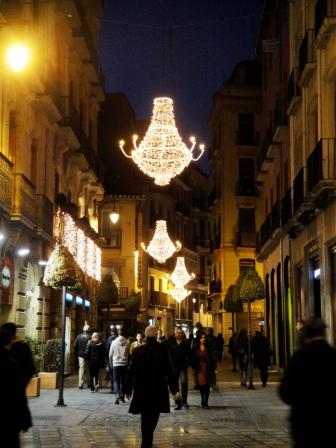 The city ignites to life during its many festivals throughout the year. Colorful flowers, extravagant parade floats and people dressed in costume are not unfamiliar sights to anybody in Granada. Although the hustle and bustle of city life is captivating, Granada unwinds each Sunday, as shops close their doors, and storeowners return home for family time. All that can be heard are the trickling fountains in the nearby plazas, and the bell of the breathtaking Granada Cathedral, constructed with a mixture of Gothic, Renaissance and Baroque elements, and the burial site of Queen Isabel and King Ferdinand-Spain’s most famous Monarchs.

Translated into English, “Granada” means pomegranate, and that is exactly what this city is. A colorful burst of flavor, made up of dozens of unique seeds, that when all are put together form a beautiful site to see. Whether you are looking to backpack through Europe, planning a family vacation, or looking for a unique getaway for two, Granada is where you want to be. So go. Make friends with the local fruit vendors, admire the artwork on the streets, order the best churros con chocolate you’ll ever taste, learn to dance flamenco, and become a part of Granada’s thriving and exciting culture.

About the Author: Gina Sloman: I am 21 years old from New City, New York and currently a Senior at the University of Rhode Island where I study English and art. I have worked at my campus Hillel as well as served on their board as the Vice President of Social Programming. I have spent my past 4 summers working at Camp Ramah Nyack. I wrote this article because of the amazing experiences I had while studying abroad in Granada, and traveling around Europe. My travel blog is www.ginaingranada.wordpress.com.

One response to “Spain: Granada the Great”