Alaska: The Whale and the Trampoline

This is an entry in the We Said Go Travel Writing Contest written by Rachel Zimmerman Brachman from Canada and now the United States. Thanks for your entry Rachel!

Something puzzled me as I drove my rented all-terrain vehicle through Barrow, Alaska.   Why did so many homes have trampolines in their yards?  In a place where it’s cold and dark most of the year, trampolines seemed out of place.
I had always wanted to visit the high north, but I never imagined I’d make it to Barrow, Alaska — 320 miles north of the Arctic Circle.  I was traveling with NASA scientists who wanted to compare the polar regions on Earth with the icy moons in our solar system.  My job, as a NASA educator, was to meet with the science teachers at the local schools. 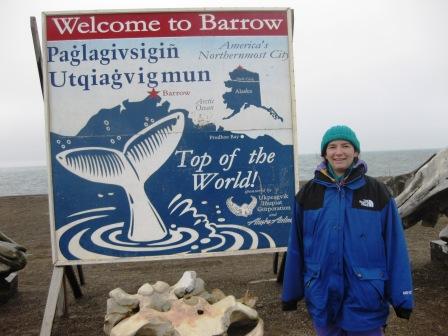 The hut where I stayed was a few minutes’ walk from the Arctic Ocean.  I wore my winter coat, hat, gloves, scarf, and boots, even though it was mid-August.  The temperature was 38 degrees F, with a wind chill below freezing.  I heard stories of winter temperatures reaching minus 120 F, and I couldn’t imagine anywhere being that cold.

I visited an ice cellar, where families store their frozen salmon, seal, and whale.  Since the ground is permafrost, people can dig a deep hole in the ground and carve out a cave 20 feet below the surface.  The cave stays 18 degrees F all year, so food stays frozen.  I got to taste muktuk — whale skin and blubber — a treat for the people who live there.

It took me a long time to adjust to the long days.  In mid-August, it stayed light out until 3:00 in the morning, and I found myself staying up later and later each night.  I wore a watch to bed because I couldn’t count on the sun to give me time cues, like I could when I was at home in Los Angeles.

The weather was cold and unfriendly, but the people I met were warm and gracious hosts.  More than half of the people who live in Barrow are Inupiat, or Native Alaskans.  Inupiat traditions are still upheld, and the strongest tradition is whaling.  Teams of whalers hunt bowhead whales.  It takes a whole crew to catch a whale, another crew to tow it onto land, and a third crew to apportion it out for the community.  No one can catch a whale alone, and no one can eat a whale alone: both are community efforts. 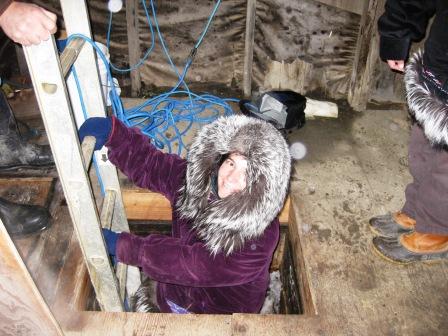 To catch a whale, first the hunters have to catch several seals.  The seals’ skins are sewn together to make the outer covering of a wooden-framed boat called an umiaq.  Hunters can only catch whales in the spring and fall, hunting only what they need to survive.  Every part of the whale is used, and there are prescribed portions that go to the crew that catches the whale, the crew that tows it into shore, and the crew that carves it up and shares it with the community.

At the end of the whaling season, there is a celebration called Nalukataq, or “Blanket Toss.”  In such a remote place, where everything else has to be flown in, anything which can be caught locally is very important: bowhead whales, bearded seals, caribou, fish, and snowy owls each have their season.  The Inupiat name for Barrow, Ukpeagvik, means “The place where snowy owls are hunted.”
But why do so many families in town have trampolines?

I visited some Inupiat Elders, asking them about the trampolines.  They told me about the community celebration at the end of the spring whaling season.   The sealskin covering of an umiaq is removed from its wooden frame, and handles are woven around the edges of the skins.  The blanket is placed on the ground.  Thirty members of the community take their places around the edge of the blanket, holding onto the handles.  They pull the blanket taut by leaning back, and the blanket is lifted off the ground to waist height.  The captain of a successful whaling crew stands in the middle of the blanket.  Everyone pulls the blanket in unison, changing the tension, and the captain is hurled up into the air.  He jumps up and down on the blanket as long as he lands on his feet.  When he misses, it’s someone else’s turn.  Some people can jump as high as 15 feet, and some do flips and other fancy moves.  The Blanket Toss is an important part of the whale celebration, along with drumming, singing, dancing, and storytelling.

And people have trampolines at home so they can practice for the blanket toss!

It all started to make sense to me.

My trip to Barrow was coming to a close, but I had learned so much on my trip, and I have so much more to learn.  I hope I will be able to return there again someday.

About the Author: Rachel Zimmerman Brachman: By day, I work as a solar system education specialist.  In my free time, I write manuscripts for children’s books.  I’m an inventor, a scientist, an educator, a writer, a mom, a knitter, and a world traveler.  My Facebook page is here:  https://www.facebook.com/rachel.brachman

Wharton Magazine: Treat Your Business Rival as Inspiration, Not Competition
Celebrations from Los Angeles to Iceland: Niver's News: July 2022
Fun in February with We Said Go Travel: 2018 News
What Should You Do this Summer in Scottsdale?

9 responses to “Alaska: The Whale and the Trampoline”