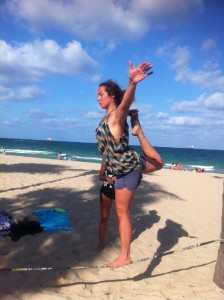 I was pedaling as quickly as I could, but I felt the ice dripping down my backpack onto my skin. The traffic on Beach Boulevard was backed up, but I zipped by in the bike lane and turned into Sunrise Village, a last remainder of old Ft. Lauderdale. It consisted of a scattering of tattoo shops, beach bars, an ice cream store, a cash-only pizza joint, and my current destination: the Fiji Kava Tea bar. I could already smell the familiar odor of Mr. B’s cigar.

“Hey Amber, are you just getting back from a bike ride?” he asked from his usual spot on the porch furniture. Mr. B came here on spring break 30 years earlier and never left. His skin was just as tan and hair just as blonde. He had an edge to him from a few prison stints, but these days he was a tropical gardener who never looked back.

“Sure,” he said and we went inside the shop that played soothing reggae music while customers puffed on fruit-flavored hookahs. Skateboards hung on the wall next to the tiki masks; one I knew to be Brent’s, the “kavatender” whose frizzy blonde hair was wilder than ever.

“Brent can you put this in the cooler for me?”

“What is it?” he asked from behind the bar and raised a curious eyebrow to my bag of ice.

“Typhoid pills. I need to keep them cold.” As if I told him it was a sub sandwich, he took the bag without question and went back to pouring kava tea in coconut shells for myself and Mr. B.

“Are you doing a bula? I want one,” rang a thick Chilean accent. It belonged to Paula, an underwater photographer who was wearing her bright blue wig. No one knew why she wore it, but by the end of the night we would all have photos with it on. Brent poured a kava for Paula, and we raised our coconut shells.

“Bula!” It was a “cheers to life.” We chugged the kava down and waited for the relaxing properties of the non-alcoholic tea to kick in.

“Are you doing work on your laptop again?” Paula asked me. Even after moving from New York City to get away from the grind, I brought it with me. The little shop changed that, and through all my world travels, I’d found where I belonged.

“Not today.” I just put in my two-week notice and wasn’t the least bit worried.

Paula and Mr. B entered into a heated debate about local businesses that refused to respect the light reduction law for the sea turtles nesting in the area. Before long they had the local news on the phone.

I sparked up a conversation with an outspoken tourist who was talking about the inflation of the U.S. dollar.

“In New York, where I’m from, we have one of the oldest alternative currencies in the nation.”

“Ithaca Hours. The premise is that you pay for things with hours of your life. It makes you think how much of your life something is really worth.”

“Hey, any of you guys want some fresh tuna?” a skinny, shirtless man interrupted from the doorway as he held up a fish on his finger.

Soon, the place was filled with beach bums and “yachties” (people who worked on the millionaires’ yachts). In time, the wealthy moving to Ft. Lauderdale would turn it into another Boca Raton or Miami, but for now it was the sleepy, weird city that I had come to love. Just as the little tea shop was buzzing with energy and conversation, Eric, the long-haired drunken owner, came storming in.

“How many times do I have to tell you not to cook fish out back? I run three other businesses and I don’t have time for this! Last week you brought a street performer in here, and now this? Turn the music down. It’s not relaxing,” he shouted and threw a bag of tea at Brent before storming off. We laughed when Eric left – he was another character and just as much a part of the impromptu entertainment.

“Does anyone want to slack line?” someone suggested and our misfit crew walked down the street to the sand and tied up our “tightrope” between the palm trees. It was against beach rules, but when patrol officers watched Donnie walk across – with prosthetic legs – they didn’t bother us. The only real rule here was to be present, and when we followed that everything else fell into place.

About the Author: Amber Nolan is a creative traveler who can’t resist an adventure, as evident in her current project which involves hitchhiking on airplanes across the United States. When she isn’t thumbing a plane ride or exploring remote areas, you can find her in a hammock on the beach in Fort Lauderdale. Her work has appeared on USA Today Travel, Frommers.com, Sherman’s Travel Media, Jetsetter, and numerous other publications.