In the fall of 1989 I made a weekend trip with a friend to Fisher’s Island, NY.  I was looking for a place to visit for a one night jaunt, near enough to Poughkeepsie NY to facilitate a drive from Montreal to that unremarkable town, and then continue the same day to our final destination.

Studying the geography of Long Island Sound proved to be a difficult task. The region north of New York City appeared on the Triple A foldout map as a jumble of expressways, suburbs, population centers with dubious reputations (like New Haven CT, which is neither new nor a haven), and other hazards to mental navigation.

Being naturally drawn to the ocean, my eyes wandered to the blue of Long Island Sound and the waters north.  There are barrier islands between New York and Cape Cod, some of them well-known, like Martha’s Vineyard, and others, like Fisher’s Island, having stayed off the public radar since tourists randomly started to pick destinations to investigate around the time of the Pilgrims.

The shape and name of Fisher’s Island intrigued me.  The speck of land – and it looked like a long thin sliver on that map of the Northeastern United States – belonged to New York State, for gosh sakes, and I had never heard of the place.

Why was that?  I’d certainly been to the Big City before, both as a child with my parents and as a college student.  I’d grown up on Cape Cod, practically, having spent every summer there since I was a baby.  I knew about the islands south of Cape Cod, even if I had never visited them, and like everyone else the name Block Island stood out, rightly or wrongly, as the home of savage kid-eating Great white Jaws-sharks.

I arrived in due time in Hyde Park, early in the afternoon.  I said to the friend I met there, “What do you know about Fisher’s Island?”  She said, “Nothing.”

“Look at the map.”  We duly studied the AAA version of New England and New York.  A little dotted line connected Groton CT with Fisher’s Island.  “There must be a ferry,” I proposed.  My friend agreed. We’d met in Massachusetts and she attended the Culinary Institute of America.  She didn’t care where we went as long as she escaped school for a blessed twenty-four hours.

So we drove over to Interstate 95 or somewhere and found Groton.  The docks were easy to locate since the Coast Guard tall ship “Eagle” was stationed there, and the craft stuck out as a space ship moored at the Detroit Yacht Club might have done.

A small sign pointed to a landing for the Fisher’s Island Ferry, just outboard from the Eagle’s dock. By now night had fallen and we had difficulty making out the details of our location.  But helpful workers had posted the ferry schedule near the end of the pier, and we only waited half an hour before one turned up, slowly backing into the dock in full reverse, with props gnashing the water and sending streams of black current toward land, then washing it back into the ocean with a great circular heaving motion.

We boarded the ferry and took off, running blind. The boat held very few cars and was not constructed with a large vehicular capacity.  Few visitors sailed these urban waters, we imagined.

In due time, unable to see much because of fog and rain, the outline of more land came into focus forward of the vessel. We docked in at another poorly lit waypoint.  Too shy to ask, we guessed we’d reached our goal.

After disembarking we found ourselves on a paved arterial road.  We didn’t have an actual map of the island.  I said, “If we go far enough we’ll come to a town.  There must be a local version of Hyannis here somewhere.”  And I was right, we did eventually arrive at a central district of sorts with a few shops and restaurants, all closed since we’d chosen late September for our visit, well after the end of the tourist season, supposing the island was even interested in collecting summertime rubbernecking outsiders.

But our luck held.  We saw more light and a wooden board that announced, Bar.  Just what we didn’t need.  But in smaller print my lady friend saw the word “lodging” at the bottom of the same placard.  “Let’s crash here,” she said.  “We don’t need anything fancy.  The bar must serve food, too. I’m sick of cooking French cuisine at the CIA. Maybe I can order some fries and a burger.”

We entered the establishment. The atmosphere held a lot of smoke but the odor of stale American beer managed to penetrate the haze.  A few tables filled with local construction worker types took up the most of the floor space and a dance square used the remaining square footage.  Fortunately, two empty seats beckoned at the bar.

We ordered food and soft drinks.  Neither of us was in the mood for alcohol in this strange setting.   The other patrons demonstrated a reserved ignorance for our uninvited presence.  But, now with a hot supper warming our stomachs, we relaxed.  I said to the bartender, “Do you let people give you CD’s to play?”  He said yes, that was fine; they had only a small selection and if we could add to the entertainment in a dignified manner he’d play a couple of albums.

I had just bought Freedom by Neil Young.  That very morning my companion had purchased the first Indigo Girls record. Neither of us had heard our own music more than once and we had no idea as to the provenance of the other’s.

I politely asked my friend if she wanted to start with the Indigo Girls.  She did.  In a matter of a two minutes the whole bar grew silent as the other customers listened to haunting lyrics of pain and love and growing up in an unforgiving world.  When that album finished the bartender immediately inserted the Neil Young disc into his machine.  The acoustic chords of “Keep on Rockin’ in the Free World,” recorded live at Jones Beach, filled the bar and demanded our attention.  The album, long by the standards of those days, ended with another live recording of the same song, this time an electric version.  Screeching guitar and demented commentary about fuel to burn and roads to drive dominated the track.

By now everyone else in the bar knew that we had brought this extraordinary music into their environment. They looked at us with new interest and acceptance.  When the bartender gave us back our CDs he asked if we needed a room for the night.  We paid our tab and went upstairs to a simply furnished but clean room with a bed and a sink.  The bathroom was down the hall.

The bar remained nearly silent. We knew this because the floor was thin and we heard only the sounds of muted conversation.  We drifted off to a pleasant sleep.

We’d come to this unknown island and completely knocked over the locals with two of the best records in ten years, back to back and just released to the public. This was in a time when such events mattered. The sad aspect to life in the twenty-first century is that we have fewer occasions like this to celebrate the arrival of artistic masterworks.

Maybe times will change and we’ll have reason to listen once more. 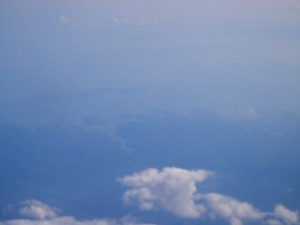 Fisher’s Island from the air in August 2012, as distant and hazy as a near-forgotten memory