Fethiye, Turkey: A Retreat from the Storm 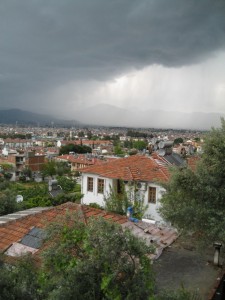 There was an ominous storm brewing far off in the distance where the blackening sky collided with the snow-capped mountains. With the musty smell of impending rain hanging in the air, I set off to explore the city of Fethiye, Turkey.

The word “foolish” flew across my subconscious as I stepped out onto the cobbled pavement. However, I brushed off any reluctant feelings as the peaceful streets and idyllic atmosphere beckoned to me like a siren leading a sailor to certain death.

As I plodded along, I reflected upon my surroundings: the canals which traversed my path, the small cafes in which old men sat sipping Turkish tea and whiling the time away, the rhythmic sound of the sea as it lapped against the dock. Indeed, Fethiye is probably one of the most beautiful and atmospheric cities in Turkey and, perhaps, all of the Mediterranean. The city is a little known destination to tourists visiting Europe and the Middle East, yet the people who do find themselves here discover that it’s very hard to leave. 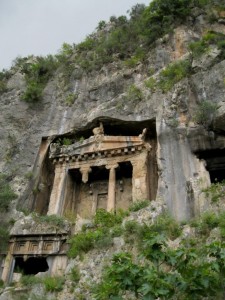 Probably the main reason that most people end up in Fethiye is to visit the Lycian rock tombs. The tombs were built into the cliff face by the ancient Lycian civilization around 350 B.C. The tombs at Fethiye form part of the greater Lycian Way, a long distance footpath covering 500 km of Turkish coastline. The rock-cut tombs are indeed breathtaking to behold. I was reminded vaguely of the awesome rock-cut constructions of Petra, Jordan.

As I pondered the ingenuity of ancient civilizations and cultures, I continued my journey through the city. Trudging slowly up a hillside on the edge of town, the landscape and cozy buildings shrunk below me. The Mediterranean opened up before me, and I squinted at the dozens of tiny quaint sailboats below rocking slowly back and forth on the water.

Remnants of the past are everywhere: in the form of the impressive rock tombs, in the form of an ancient crumbling Roman theater, in the form of a ruined and deserted Crusader castle overlooking the city. Any visitor can easily blink their eyes and be fooled into thinking that they have suddenly been whisked back in time.

Gazing across the city, I was lost again in a daydream of times past. Suddenly, I shook my head and realized that the storm was almost upon me. I watched in slow motion as a grey sheet of rain crept towards me from the distant mountains to my perch on the hillside.

Then, in a flash, the sky opened up and I was hit with a torrential downpour. Lightening cracked and thunder boomed all around me. I covered my face hurriedly and ran for the closest cover I could find: a fruit stand positioned precariously on the road overlooking the valley. 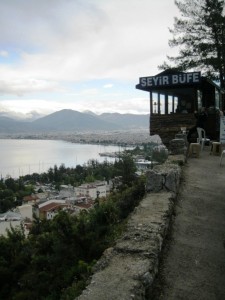 The vendor beckoned to me, to which I quickly responded by ducking under the shelter of the metal roof. Suddenly, realizing my predicament, I exclaimed to the vendor, “Is this safe?!” After all, standing under a large hunk of metal is probably not the best place to be in the middle of a raging thunderstorm. “No proooblem…no prooooblem!” he remarked, seemingly unfazed. I theorized that those might just be the only two English words he knew. Nonchalantly, he offered me a glass of freshly squeezed orange juice. As I sat and sipped, we smiled at each other and watched together as the rain bathed the town below. I slowly felt all my previous worries slip away. Soon, the tremendous storm turned into a faint drizzle and the booms of thunder moved into the distance.

“No problem,” I chuckled to myself. In an ancient and timeless place such as Fethiye and in good company, all worldly problems and storms indeed seemed to disappear.

About the author: Hannah is a self-professed travel addict who is leaving her life in Texas behind this September to travel solo around the world. She has no plans of going back, as she pursues her quest to visit some of the most intriguing and formidable places on earth. You can visit her travel blog, Caravan of One, or follow her on Twitter.

One response to “Fethiye, Turkey: A Retreat from the Storm”