I Dream of Italy in Rome 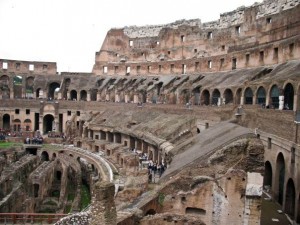 The train lurched to a stop and I double checked to make sure this was where I was to get off.  The sign read Colosseo.  I stepped off the train and stopped at a bench to find my map and directions as to what exit to take.  I was still a relatively new traveller, and the prospect of getting lost frightened, rather than excited me, as it does now.  I made sure no one could see what I was looking at, something my mother had told me to do to blend in.  My hair was dyed black then and I could easily be mistaken as an Italian, rather than a tourist.  I was a young, naive woman travelling alone and I couldn’t be too careful.

I was exhausted.  I was booked in for three nights at a hostel near Termini Station.  It had a great location and was cheap, but it wasn’t one of those hostels that defy all the stereotypes.  It was the stereotype.  The showers were grimy, the whole place smelled of mildew, the mattresses were lumpy, and the workers were rude and barely spoke any English.  Yet years later, I still recall my time there fondly.  There was free breakfast, as well as a free pasta dinner every night, and free wine.  More importantly, were the others staying there.  We had stayed up the night before singing while one of the members of our newly formed United Nations group strummed the hostel guitar.  Just as we were gearing down to head to bed, a loud French band with a neon orange tuba came in.  They were there for a competition and we ended up staying up till the crack of dawn.  I only had three days in Rome before going to visit my friend in Bologna and I had to make the most of it, tired or not.  I had yet to learn not to make concrete plans while travelling.

I slowly made my way up the stairs, anxious as to where to go once I reached the top, nervous as to how I would get my bearings, hoping there was a sign in English pointing me in the right direction or a crowd of fellow tourists I could follow.

I didn’t need to worry.

I didn’t see it right away because my eyes were down, glued to the map with the worry of an amateur.  When I reached the top step and tore my eyes away to get my bearings, I stopped short and nearly got plowed over by those behind me, but I couldn’t move my feet.  The Romans around me went about their daily life, seemingly not even noticing the magnificent giant towering over them.

There it was, smack dab in the middle of Rome, right in front of me, bigger than life itself.  The Colosseum.  My eyes filled up with tears.  I was thankful for my sunglasses, shocked at the reaction it had evoked in me.  The thought of this moment still brings a well of emotions to me to this day, over five years later.  As I entered the Colosseum, I knew I wouldn’t be seeing anything else that day in Rome.  All I wanted to do was gaze into the vast expanse, grown over with vegetation, running my hand over the cool rock, imagining the animals being held in the pens, the roaring crowds, and the epic battles between man and beast. I could almost smell the metallic blood rising up to meet me.

I’ve been fortunate enough to see a lot of things I had always dreamed of seeing.  However, perhaps because they were so built up on a pedestal in my mind for years, once I got there, they often didn’t live up to the expectation.  But the Colosseum is a rare exception; it blew my mind.  It wasn’t number one on my list, surprisingly.  I had just wanted to stop in, take a few pictures, and move on.

Over the next week and a half I ended up spending in Rome, I went back nearly daily, sometimes more than once.  I went at sunrise, at sunset, at night.  I went alone and in groups.  I went in between excursions to the Pantheon, the Vatican, and getting caught up in a protest on the Spanish Steps.  I couldn’t get enough of it.  I found any excuse to pass it by; I was under not only its spell, but the spell of the whole city.  I stayed days after my new found friends had moved on and I called my friend in Bologna to let her know.  I drank the whole city up as though it were an oasis that might disappear at any moment.  To this day, I still dream of Rome.

About the Author: Tzigane Ludwig graduated with a Bachelor of Science in Agriculture which she’s never used and instead followed the meaning of my name (‘gypsy’ in Hungarian). She’s milked cows in Australia, worked as a carnie in Scotland, harvested potatoes in Switzerland, and taught English in Japan. She’s currently back in Canada, working on a degree in International Development.

4 responses to “I Dream of Italy in Rome”