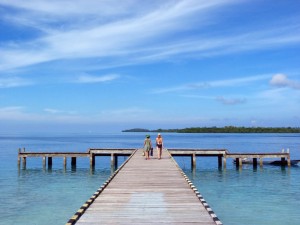 Dov Frazer is a long time friend and a travel enthusiast. His first round the world trip lasted nearly three years! George has traveled with him to remote and exotic places like Nepal and we have all spent time together in Bali. Dov shares his latest trip of discovery in Indonesia. Discovering LeiLei ….

Back in the day, the Moluccas were one of the most desired places on earth.  Today few people have even heard of them and even fewer bother to visit.  The Indonesian province of Maluku or the Moluccas, as they were once called, was the center of the coveted spice trade.  Cloves, nutmeg and mace were worth more than their weight in gold and the English and Dutch spent a few centuries fighting over who would control this very lucrative trade.

I have been doing business in Bali for the last 25 years and visit once a year for about a month.  For the past several years 3 friends who live in Bali and I have been taking trips to Maluku to explore this rarely visited but incredibly beautiful group of islands.

On our first trip we discovered some of the most stunning snorkeling anywhere on a tiny island near Saparua near Ambon.  We are all keen and experienced snorkelers and each of us is more jaded than the next so when I say some of the best anywhere I do not say this lightly!

On our second trip we spent 9 days in the fabled Banda islands which was the center of the nutmeg and mace trade. This island group can only be described as pure GAGA – an amazing combination of volcanic beauty, history and forts galore, views to die for and superb underwater delights. The Bandas alone are worthy of a whole separate story but alas that will have to wait.

Our third trip in February of 2012 started in Ternate, a sultanate in northern Maluku that once controlled the trade in cloves. You can fly to Ternate no problem but there are no direct flights from Bali so we ended up taking a night flight to Jakarta, camping out on the outdoor benches from midnight to five in the morning, then flying Jakarta to Manado, changing to a prop plane and then flying Manado to Ternate.  It was a 15-hour trip which seems like a long time if you look at a map.
Ternate is a large volcano with a bustling city at the base.  We spent several days exploring the old English and Dutch forts, visiting the Sultan’s palace, snorkeling and beach hopping.  We also visited an old fort and memorial sight where the Portuguese had massacred many locals. We hired a boat and did a full day trip to circle the tiny island of Hiri which is perched just above Ternate.  The snorkeling was good and the views back to Ternate’s volcano even better.

We had arrived in Ternate having 9 days to explore but no plan of action. We all desperately wanted to find an island to just chill-out but we had no idea where to go.  We were finally rescued by Azis Momanda from the North Maluku Tourism Office who was only too happy to help. Of all of the alternatives he presented, we decided the best option was to visit the LeiLei islands in the Guraici Archipelago despite the fact that Lonely Planet talks about LeiLei but warns, “Arachnophobes Beware.”

The only way to get there was by local boat. It miraculously left on time and arriving at LeiLei a mere 6 hours later.  We sat on the roof of the boat, the sea was calm and the scenery of volcano after volcano jutting out of the nearby seas was really spectacular.

The accommodation on LeiLei had been built about 10 years ago.  There were 10 large and long wood stilted bungalows with 3 rooms each, a small toilet for each room with no running water, a kitchen with no sink or water and a long balcony facing the beach.  The bungalows, grounds and beachfront were all in good condition and well looked after. However, it appeared that few visitors had ever come to visit.

You can walk around LeiLei in about 45 minutes.  There are 2 small villages and 2 tiny shops. Our bungalows were isolated and well away from either village so it was quiet and peaceful.  A small ring path went all around the island and villagers walked by or rode past on small motorbikes. We had our own clean white sand beach and the entire horizon before us teaming with islands.  Sitting on the beach in front of our bungalows you could count 15 distinct islands in view, many of them volcanoes.  The outlook was simply stunning.

We arrived on LeiLei on a Monday and did not have to leave till Friday so we spent most of our days renting boats and taking daytrips to the various islands, snorkeling and exploring. Much of the coral in the area has been damaged and after daily boat tours to snorkel around the surrounding islands, it turned out the best coral and most abundant fish were right in front of us.

About a 10 minute swim from our private pier was tiny Guraici Island which is also the name of the archipelago.  You could snorkel around the entire island and we were thrilled to see sharks, turtles galore, a massive eel and oodles and oodles of colorful fish.

Eating on LeiLei was a challenge.  There were no restaurants of any kind so we had brought a fair amount of food and heaps of bottled water with us from Ternate. We arranged for the wife of the bungalow manager to cook our meals at her home and then ferry it to us by motorbike where we all ate together at a big table in one of the bungalows.  The first couple of days we had fresh fish and lots of great veggie dishes but by day 3 and 4 our meals become rather sparse with fewer and fewer vegetables and surprisingly little fish. Luckily, each of us had brought various private food delicacies from Bali so we hardly starved.  However, if we had arrived completely unprepared to LeiLei we would have been hungry after a couple of days.

The favorite part of the day for me was my coconut ritual.  I bargained with the gardener to bring fresh young coconuts every day and I would buy 3 or 4 of them.  For the low low price of 20 cents per coconut he would use his machete to cut back the husk. All I needed to do was apply a small amount of pressure to the top with a straw to get the coconut water. It was absolutely delicious, refreshing, clean and nutritious. Surprisingly each coconut tasted slightly different.

The bungalows had been constructed with AC but the units no longer worked. In fact there was no regular electricity. We paid extra so that gasoline could be bought for a generator so that we could have lights and power from dusk to 11pm.

The rooms unfortunately did not come with mosquito nets so I got to test out my latest product – the two person Hammock Bliss Sky Tent 2. I slept like a baby and had no problem with bites.  My other friends were not so lucky and were eaten alive at night by mosquitoes. One night I loaned the Sky Tent to Jado and Keturah who together had a blissful bug free sleep.

Our boat trip back to Ternate did not go as smoothly.  The tiny boat ended up stopping at a nearby island to pick up about 100 bags of copra or coconut husks to transport back to the big city for sale.  It ended up taking a couple of hours to load the boat as we sat there frying in the sun.  The boat was so heavy laden with copra that it took over 10 hours to get back to Ternate.  Luckily we used one of our hammocks as a sun sail which at least gave us a bit of shade!

Before we left, we were asked to sign the guest book and we discovered that in the last year only about 20 other guests had visited the island. Lucky for us, Lonely Planet had scared away most travelers. Mosquitoes were more of a nuisance than any spiders and we ended up having this little paradise to ourselves.

Overall LeiLei was just what we were looking for…a remote, stunningly beautiful place to chillax.

Who Won the Best in Travel Photo Award 2019?
Asian Tea House- Simply the Best: Pokhara, Nepal
Greece: Walk On The Wild Side
Accidents happen: Why quality travel insurance is key

Dov has had the travel bug since his first 10 week trip to Europe after high school. He spent his entire junior year at Dartmouth College abroad, first living with a family in Bourges, France, museum hopping around Europe and then doing a 5 month stint at a Kibbutz in Israel. Dov worked for a couple years after college to save money for a big trip and then proceeded to travel for 3 years nonstop. Two years of that trip were spent in Asia and one year in Europe and North America. Coming back to the USA after 3 years was quite a shock, so Dov established an importing business to integrate his love for travel and the reality of work. His travel articles were have been published in the Scottsdale Progress, The Arizona Republic, the Dartmouth Alumni Magazine and on the BootsnAll.com website. He is currently the Chief Relaxation Office of Hammock Bliss hammocks and lives in Sydney, Australia with his wife Roslin and son Ben.