A Simple Safari In The Jaisalmer Desert – India 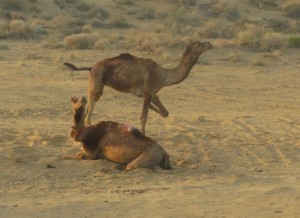 Rajasthan, Northern India. 2 hours away from the Pakistan border. Our location was Jailsalmer. I never imagined I would be in this territory in my life. I had made my way up from the southern parts of Kerala, through Goa, Mumbai, and Udaipur consisting of long train journeys, regularly awoken by the sound of ‘Chai’ from local sellers of the popular Indian tea. Reaching the desert, I felt like I was an explorer reaching unknown lands, coming across the end of the world.. Alexander the Great once travelled through India, to the Western world then in BC time it was a new adventure, to me in 2013, and this was also the case.

This was an experience I had longed for since coming to India, I wanted to ride a camel, trek to the harsh desert, to see the mountains and dunes of sand in my path. I wanted this challenge, having the perception that it was survival of the fittest. Four of us took a tour from Jaisalmer with the tour company called the Trotters. They were recommended from a friend of mine from England. The name of the company is copied from the famous British Sitcom TV show ‘Only Fools and Horses’. The two main stars were the South-East London Brothers, Del Boy and Rodney Trotter. It was a good name and certainly to the British like me, it got the attention. Our route began as we drove out via Jeep to the outskirts of the desert. 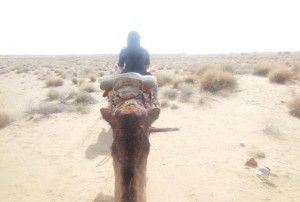 By the time we reached our spot, there were 8 of us in total, with camels ready and waiting. At that point, I had never been that close up to a camel. For me, they are lazy-looking animals, but more towering in size than I had initially expected. They were fairly co-operative, plodding along the sand, only stopping for a quick munch of any green plant they could find. I had packed alot of water with me, a bandana wrapped around most of my head, and a long sleeved loose shirt covering the upper part of my body. The sun was extreme, I had to take precaution, although I had been on the road nearly 7 months by then across Asia, I have had trouble with the sun in previous years. I was frightened of sunstroke but I had learnt from it. This was the survival part of this trip I liked. Although in hot circumstances, it was almost a challenge to overcome this. Hostile heat and basic conditions, this was no five star resorts. It was for the ones who wanted it, who didn’t mind sharing a cup of Chai, or eating Rice from a Pan heated up from manmade fire.

There was nothing else in site apart from layers and layers of sand. There were no towns, no shelter, and no lakes. We were in a land of pure isolation. It was a journey battling the bumps of the sandy path until we got to our spot to stay. The camels were left to frolic around us, it was wonderful to see their freedom as animals as not as a form of living transport. A jeep with a couple further tour guides joined us after we found our spot. 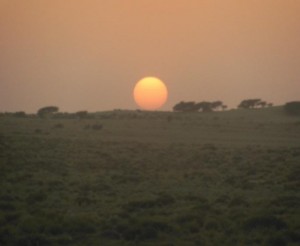 We checked out the Sandunes, climbing them and playing around in their smooth existence. When that moment arrived, it was unexpected to be as jaw dropping as it was. It was something out of a sci-fi movie, a golden ball of fire in full force visible to view its whole circumference to the naked eye, a purely magical moment that any photographer in the world would pay for. It almost looked like a painting of a picture, or a NASA satellites image zoomed close in for us all to see. It was really there, right upon our very eyes for us to fully embrace.

I slept on the roof of the Jeep that night, under the thousands and thousands of stars above us. It was an astronomers dream as the sky was clear, the universe in full vision. I finally slept when the night was dark, comforted by the air being cool.
A 6am wakeup was natural, being outdoors, the sun’s rising rays lighting up the desert. We ate some breakfast, drank some water and battled back before the sun hit its peak of midday. I felt fulfilled; it was my first real safari. There isn’t much more to say about it, it was just appreciating the natural features of the world. Appreciating life that is so far away from our modern day to day life, yet such a simple experience I never thought I’d manage to achieve. 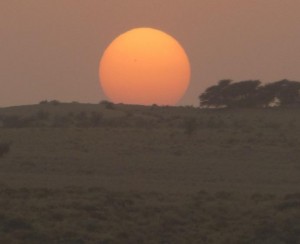 2 responses to “A Simple Safari In The Jaisalmer Desert – India”