Dice of Price or where to go?

Everyone is always asking us:
Why Sri Lanka?
How do you decide where to go?

One way we decide is the DICE OF PRICE. If we are considering several choices and one has a much better deal on the flight, that is where we go. Several years ago, George wanted to go to the Cook Islands and Fiji but it was much cheaper to go to Fiji and Vanuatu so off we went. For our honeymoon, the flight to the Cook Islands was a great price so that became our top choice.

In January, the New York Times listed SRI LANKA as their top choice out of 31 places to go in 2010. Click here for the article. Our friends had been there in the Fall and other friends 30 years ago and they all highly recommended Sri Lanka. Since the Civil War was over, we decided to check it out. I have to admit that Lionel Beehner’s article did not cover any of the highlights I loved.

He spoke of Nilaveli Beach which we did not like while we both liked Arugam Bay in the East and loved Tangalle Beach in the South. While I agree the Galle Face Hotel is worth a visit, I loved the fort in Galle more and my favorite thing was the three National Park Elephant Safaris that we went on. Most people love Yala, the biggest National Park where some people see both Elephants and Leopards. This outing which started at 5am and included few animals was our 3rd favorite. We had an amazing experience with Bundalla especially since we were almost the only jeep in the park and had a one-on-one with a male elephant at a watering hole. (see top photo). 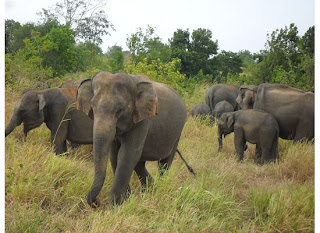 Our favorite experience was in Udawalawe where again there were few jeeps and many animals. Sadly there had been a recent wildfire started by someone’s cigarette. But we saw many elephants, several individual males and a family group we watched for nearly an hour. It was AMAZING! I highly recommend Udawalawe National Park.

Now we want to know: Where do you think we should go NEXT? Where are you going on your next adventure?

You can post a comment by clicking where it says comments at the bottom of any post. We would love to hear from you!
Happy Travels!
Lisa and George
ps.  Another way we pick our trips is by reading the Lonely Planet (in China we called it THE BIBLE!)

What Lionel Beehner said about: “1. Sri Lanka
For a quarter century, Sri Lanka seems to have been plagued by misfortune, including a brutal civil war between the Sinhalese-dominated government and a separatist Tamil group. But the conflict finally ended last May, ushering in a more peaceful era for this teardrop-shaped island off India’s coast, rich in natural beauty and cultural splendors.
The island, with a population of just 20 million, feels like one big tropical zoo: elephants roam freely, water buffaloes idle in paddy fields and monkeys swing from trees. And then there’s the pristine coastline. The miles of sugary white sand flanked by bamboo groves that were off-limits to most visitors until recently are a happy, if unintended byproduct of the war.
Among the most scenic, if difficult stretches to reach, is Nilaveli Beach in the Tamil north. While a few military checkpoints remain, vacationers can lounge on poolside hammocks under palm trees or snorkel in its crystal-clear waters. Or they can order cocktails at the Nilaveli Beach Hotel (www.tangerinehotels.com/nilavelibeach), a collection of recently renovated bungalows with private terraces.
An international airport in Matara, on the island’s southern shore, is under construction, which will make the gorgeous beaches near the seaside village of Galle easier to get to. Decimated by the tsunami in 2004, the surrounding coastline is now teeming with stylish guesthouses and boutique hotels.
Unawatuna, a crescent-shaped beach a few miles south of Galle, may be furthest along. Higher-end hotels there include Thambapanni Retreat (www.thambapanni.biz), which features four-poster beds, yoga and an ayurvedic spa. The Sun House (www.thesunhouse.com), in Galle, looks like a place where the Queen of England might stay, with its mango courtyard and colonial décor. One stylish place tucked within Galle’s city walls is the Galle Fort Hotel (www.galleforthotel.com), a refurbished gem merchant’s house run by a couple of Aussies. — Lionel Beehner”

4 responses to “Dice of Price or where to go?”