This is an entry in the We Said Go Travel Writing Contest written by Janet Myers from The United Kingdom. Thanks for your entry Janet!

By now we had come to the conclusion that the northern lights are by no means a guaranteed experience, even for holidays like ours which lasted 10 days.  The northern lights are always there but seeing them is elusive.  We spent the last but one night in Vik on the south coast as we wanted to explore the dark black sandy beaches, the glaciers and the surrounding countryside and it was a stopping point on our return journey from Jokulsarlon glacier lagoon.

We found a great local place to eat.  The community was small and orange balloons and bows hung outside the houses while fairy lights twinkled both outside and inside as they do for us at Christmas. In the restaurant we told that tonight was the last day of Summer and tomorrow would be the first official day of winter and we were asked if we would like to join in the celebrations at the small church.  It was more like a harvest festival.

Jonathan wanted to have one last chance to see the northern lights.  For some reason he was positive he would see the lights tonight but I was not so optimistic and by now Iceland had blown me away with so much beyond my wildest recollections and with such intense colour of every hue that I did not really care any more.  Vik on the southern coast was an excellent place to be and an artist in Reykjavik told us to look low on the horizon and if the clouds parted we might see a green glow on the horizon.  We had received no text alert but decided to drive a short distance from the hotel around 11 pm as our guide had told us this was a good time.  We will give it just 1 hour my son said. 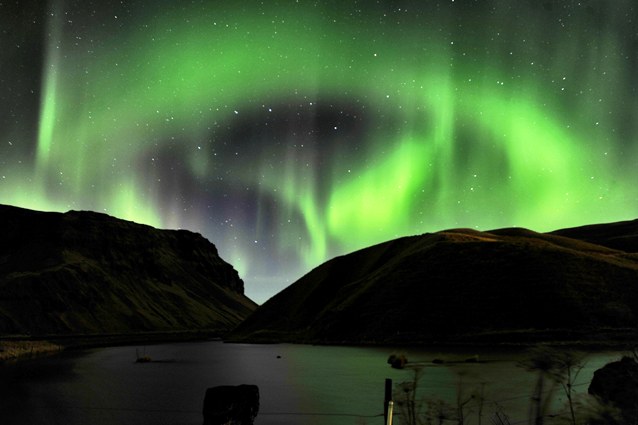 We drove out of the hotel drive.  A cluster of low buildings close by the mountains and the sea.   The sky above twinkled with millions of stars in a vast black heaven.  ‘We will just get past that mountain’ my son said followed by ‘look mum in the sky I think I can see them’ and sure enough all around the lights gave us a display which must have measured high on the aurora scale.  Curtains of light fluttered, great arcs swept across and other patches of activity waned and intensive with every passing minute .  It was difficult to know where to look.  Afraid that they might disappear we wanted to soak up the whole atmosphere so stopped close by the hotel.  Not that we needed to worry as they lasted all night and even when we looked up into the sky the next day we could still see faint traces of them in the heavens above.

That night My husband and I would have climbed into bed and put the northern lights down to an odd occurrence that we were not going to see but with a younger son with all the drive and  optimism  of youth we were kept from our beds. He stayed up photographing for many hours and around 3pm a text alert arrived saying that the lights could be seen tonight but we had already had our fill.  Thank you Jonathan.  Having a thirty year old or something son meant that our wish had been fulfilled.  It could not have been all bad for him either for when on our return we got to talking about our next holiday he said, ‘perhaps I’ll come again with you guys’

About the Author: Janet Myers: Retired with diverse experience.  Passion for travel, photography and life in general.