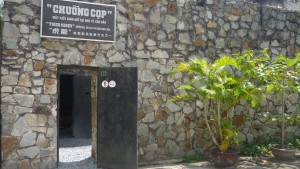 Today, I and Bejal Karia, my Indian friend who is now working as IT officer in London walked from Ben Thanh market to War Remnants Museum (located at 28 Vo Van Tan, District 3, Ho Chi Minh city). However, when we came, it was already closed for the lunch time. So, please keep in mind its open hours (if you have intention of visitting it of course): It opens all days, 07:30 AM – 12:00 AM and 01:30 PM – 05:00 PM. We came around and saw a small pagoda (2 kilometers far from there, but it seemed not to matter at all when you were trying to find something new to see, just go, go and go). Let’s talk about that pagoda later.

At 2 PM, we came back and bought the ticket. It is 15.000 VND/ person. There is no difference between the foreigner or the local, or even the adult or the child. We were so happy that it was not like a ticket but like a little guide flyer somehow. 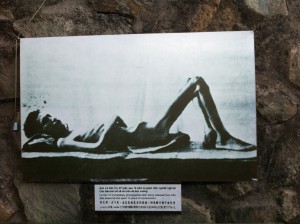 Putting our foot inside the building, we saw a large range of B&W photographs which showed a lot of historical truths about the war between Vietnam and France, Vietnam and USA in the past. It is called Requiem – collection of war documentary photos taken by 134 journalists from 11 nationalities, killed during Indochina War. Some of them are from Japanese photographers: Bunyo Ishikawa and Nakamura Goro.

Those pictures mean a lot to me, more than any history lesson which I was taught at school. I loved some photographs representing the strives other countries’ people did for the peace, the independence of our country.

I also took a lot of photos with some US aircrafts which were left here after war. It was so big and I can be sure that they had enormous devastating ability. 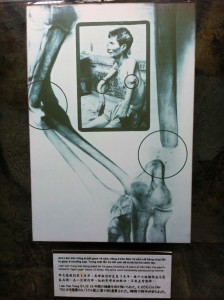 However, they are not all. Just near the area where aircrafts are displayed, it is the “Tiger Cages,” special cell in Con Dao jail. At first, we only hoped that it is a kind of imprison. Yes it was. Nevertheless, you can feel the imprison conditions during the war as well.

Here is the guillotine, there are the tiger cages, the photographs expressing the way our people were beated or treated to reveal the political and military secrets by a lot of other savage means.

In fact, I saw some foreign tourists cry for those pictures. They touched our heart roughly. I could not take more pictures, because I think that I do not want to see them again. We felt so hurt, even though it is not us who were treated so badly which can not be considered as the way to treat with people. We could not figure out the reason. Why did not we choose to live in peace? 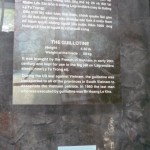 When we were going out, my friend asked me “Are you okay?” I said, “Yes, but I am still scared.”  She replied, in the saddest voice I have heard from her: “It is the most terrible museum I have been to. It made me almost cry like a child.”  Walking back, we did not say anything to each other. Because each of us had something to think about. For me, I only want to say thank you to all the brave heroes of my country, who did their best to struggle with the invaders to protect our independence, our peace.

I feel so lucky to be born and live in the modern life, when the bombing had gone far away. Suddenly I thought about some other countries in the world, where people still hold the guns towards others. Pray for them, pray for some children who have never had a good sleeping night, who have no chance to go to school there, pray for people who have been and will forever be scared of the bombing sound, of the war.

About the Author: Hi everyone. I am Little Nomad from Vietnam. I have passion for both writing and travelling. That is why I would love to become a travel writer. Here is what I have done. My website: alittlenomad.wordpress.com 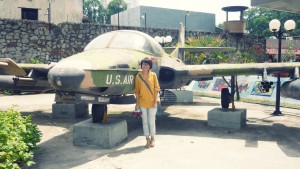 Canada: Tall Towers and Freedom
Iceland: A Trip to the Moon
Indonesia: A Wooden Pole in the Village
Australia: The Head of the Carpet Snake