Gloaming in the Mountains of West Virginia 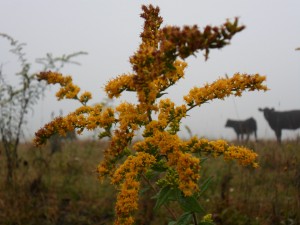 I was a speck on the vast stretch of land sweeping out around me. Tall grasses undulated across the flats and up the hills before seeming to spill back down the other side. Clouds, purple streaks clinging to the last color of the sun’s light, whisked across the darkening sky. In every direction mountainous peaks shot up, exposing their grassy sides to the waves of winds tumbling from the gaping sky above. Sheep dotted some fields, white masses in the distance. I could imagine their lips nibbling daintily while their ears flickered and eyes spun around, slightly perturbed by the nighttime shadow descending upon them. Below my perch on the bouldered cave-top, slick black cows and calves buried their heads in the golden grass along the creek. Intermittent soft ‘lows’ were carried along the gusts as cows relocated their vagrant calves.

My eyes followed the single dirt road to where the forest cropped out, obscuring the view to camp. In this quickly fading twilight, I knew I had to head back soon. The generator would be started by now in the bunk house, and people would be sitting at the ramshackle table, legs kicked out and cowboy hats dangling on the backs of chairs. The hounds, exhausted from running alongside our horses all day, would be half-heartedly playing, grabbing each other’s throats with guttural growls while maintaining a horizontal sprawl on the plywood floor. I slid from my seat and began to pick my way down the steep bank to the road. Goosebumps rose on my arms as cool draughts swept away the heat rising from the sun-soaked earth.

The pure enormity of nature around me compelled me to be quiet. I placed each foot carefully, silently, so I could almost feel that I had disappeared into this raw West Virginia wilderness. A soft moo hummed from the cow nearest to me. Her eyes rose accusingly and I realized I had crossed directly between her and her calf. Her calf was oblivious, chewing curiously on a purple thistle bud. The cow swung her hindquarters away, standing square to face me. Her liquid eyes met mine and she held the gaze, her head lowering and tilting threateningly. A sharp snuff burst from her nostrils. I froze momentarily. A furious debate began in my head: walk or run? New enough to cow/calf pairs to not know the right move to make but experienced enough to be wary of a cow’s maternal instinct, I wished I was in shouting distance of camp. 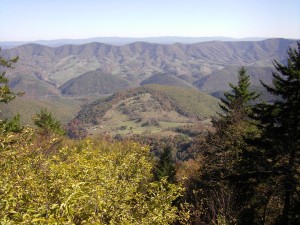 I eased forward, singing softly the last James Taylor song that had been playing in the truck on the way up the mountains. “Oh, I’ve seen fire and I’ve seen rain. I’ve seen sunny days that I thought would never end. I’ve seen lonely times when I could not find a friend….” My words slipped away. The cow’s hard stare remained on my figure inching by. She gave another warning huff. This exhalation caught the attention of her calf. It swung its head around. Startled by its distance from its mother, it quickly turned and trotted back towards her, giving me a wide birth and a nervous sideways kick as it passed. The cow instantly dropped her nose to her calf’s back. Her eyes lingered on me a half second more before she turned and herded her baby away to safer grazing.

I watched my path more closely until I was clear of the herd. Stars were emerging in the canvas of night overhead. The wind stirred the grasses and trees and the creek chirped and plinked downstream. I paused a short distance from the bunkhouse. Silhouettes crossed by the door. The light glowing from the doorway was met with a wall of darkness. On this side of the wall, the blackness was actually a thousand shades of color. The earth was as alive as ever, pulsing as it did every day, whether I was here to see it or not. It was my complete inconsequentiality, my being a temporary filling of space, that made me feel transparent. It was as if my skin of human consciousness molted away and left my soul free to shiver in the swirling air enveloping me. I listened to one more coyote howl then, like a calf returning to its mother, I crossed into the light and the wash of familiar voices.

About the Author: Amelia Greenberg was raised in New Hampshire and is a nineteen-year-old undergraduate at Grinnell College in Iowa. She has been riding horses since she was nine and has worked the past four summers on a horse and cattle farm in Virginia. She has also worked on horse farms in Wales and France.

South Africa: The 'Berg
Finding Freedom For Passover in Los Angeles
August News from We Said Go Travel
Will I see you July 2 at the Culver City Centennial Westside Food & Wine Festival?