This is an entry in the We Said Go Travel Writing Contest written by Jeff Shoer from Canada. Thanks for your entry Jeff!

In true Montrealer or Montrealais (French version) fashion, I am starting my night just before midnight on a Thursday – in this case it’s Valentine’s Day. A city with true, “joie de vie,” despite sometimes bitterly cold weather – you just can’t stop the locals, and the visitors alike, from grabbing a night cap and bite at any hour. Having traveled near and far in search of international nibbles and then returning back, I realized that perhaps I’ve been holding back my true (stomach’s) love for Montreal. 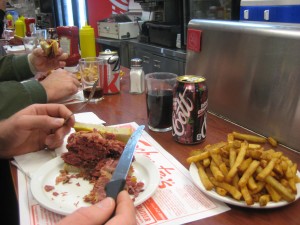 The “Paris of North America,” the “City of Summer Festivals: Jazz, Comedy, Grand Prix, Beer, Fringe and more),” or as I like to call it a Cuisine ‘lovers’ Paradise. Sure Montreal has the four seasons; Winter which consists of a heavy dose of snow, blowing snow and thankfully melting snow. Through that it’s the food that keeps me going. I have literally caught myself eating a half a dozen tapas sized meals in a day to take it all in (pun intended). From the well known favorites, like Smoked Meat (Schwartz’s – Montreal Hebrew Delicatessen, 80 years strong is the staple) with a side of Kosher Dill’s, washed down with the requisite Black Cherry Soda, and the now more commonly known Poutine (fries, gravy and cheese curds), to the somewhat lesser known Montreal style bagels (less bready, with a light sweetness), and then on to various seasonal items.

In the fall, on a peak foliage weekend, I recall driving up north to the closest ski village where they make authentic Bretonne style crepes. Another local winter  tradition is warming up before or after “The Habs,” (the nickname of Montreal’s professional hockey team) at Mr. Steer Burger an institution since the 50’s (currently under renovations and re-opening soon) which crafts giant seasoned meatball ‘shaped’ burgers. Fans of which are known to take them away by the (pre-cooked) tray load. In the spring, it’s time for sugaring off at the Sugar Shack or en Francais “Cabane a Sucre,” – not a food in itself, but and extravaganza of sweet maple infused delights like egg soufflé covered in maple syrup and sugar pie then topped off with second dessert, “Tire sur la Neige” (warm maple taffy poured over ice and rolled onto a popsicle stick – now that’s my kind of lollipop). 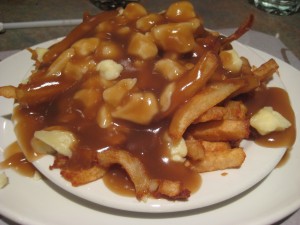 In the summer you’ve got late nights at the Orange Julep (a car hop shaped as a gigantic orange serving up their version of an Orange Julius drink, steamed hotdogs and “Pogos” (Canada’s answer to corn dogs). Not only with it’s four distinct eating seasons, Montreal is now sprouting new food havens, clustering in districts, likened to baby Chinatowns. In fact there is an area that now boasts dozens of Asian inspired resto’s (a French slang for restaurant). I have coined it “Petit Chinatown,” but so far that hasn’t caught on. Not all of these ‘finds’ are grouped together. The other day I noticed the letters TA on a sign in front of a long time closed college favorite of mine, then called, “Pizza des Pins,” on Avenue du Parc near Mt. Royal Park (another place to see foliage).

It turns out that my suspicion was correct, it was owned and operated by a couple who had lived in Australia and opened a true to form, “Down Under” meat and veg pie shop. I knew Ta was a colloquial version of thank you from a previous trip. Wouldn’t you know they make a mean Steak and Mushroom single serve – I added a puddle of savory brown sauce to dip. One more ‘find” for good measure, today, I looked up and saw a bright yellow sign yielding one solitary word – Arepas. I had only had the pleasure of eating these prominently Columbian and Venezuelan thick pita pocket looking sandwiches in one other place. I had already eaten, so I just confirmed with the gents behind the counter that they were indeed serving up what I knew and loved.

New Latin inspired cuisine in Montreal. I’ve known through many an ethnic meal that the largest city in “La Belle Province,” has diverse restaurant choices, but now I was utterly convinced. Montreal is becoming more and more a United Nations of food destinations. It wouldn’t go toe-to-toe with a New York or a Los Angeles in a bout of food boxing. I do think it could step in the ring against cities of similar size and population (metro area in the 1.5 million vicinity) and score a K.O. I’m personally a lover not a fighter by nature so in the spirit of Valentine’s day, I’ll wrap this package of salivations up. Does your stomach want to make a date with Montreal? Mon Amour.

About the Author: Jeff Shoer: Having traveled the earth in search of a happy stomach. Jeff continues to follow a path to food loving destinations. He hopes to walk off the calories en-route to more great tastes. https://www.facebook.com/jeff.shoer

Donegal, Ireland: A Place I Love
Canada: Three Trips to Confederation
A Place I Love: Los Angeles
Explore Toronto with CityPASS and me!

One response to “Montreal: Mon Amour”