The jungle is alive with the choir of singing bugs.  While floating our way down The Paraguay River on a boat in The Pantanal in southern Brazil, our guide, Pedro informs us that most of the time the choir of cicadas, katydids and crickets is almost deafening to the point that yelling to each other is almost a necessity.  The hotter it gets, the faster and louder they sing.  The stench of the alligators that litter the river as well as the banks is so overwhelming that our guide hands out a menthol creme to rub under our noses to mask the malodour.  It is almost intolerable to keep my shirt on as the sweat and humidity inundate my already soaked torso. I know that if I do take off my shirt, the mosquitos that swarm all around us will eat me alive.  Our boat is sputtering upstream so slowly that it doesn’t even create a breeze to help with the heat and humidity.  Salty sweat from my forehead constantly trickles down into my stinging eyes.  No matter how much I wipe my forehead, there is plenty of sweat to replace it.  My hat I was wearing didn’t even put a dent in how much I was sweating. 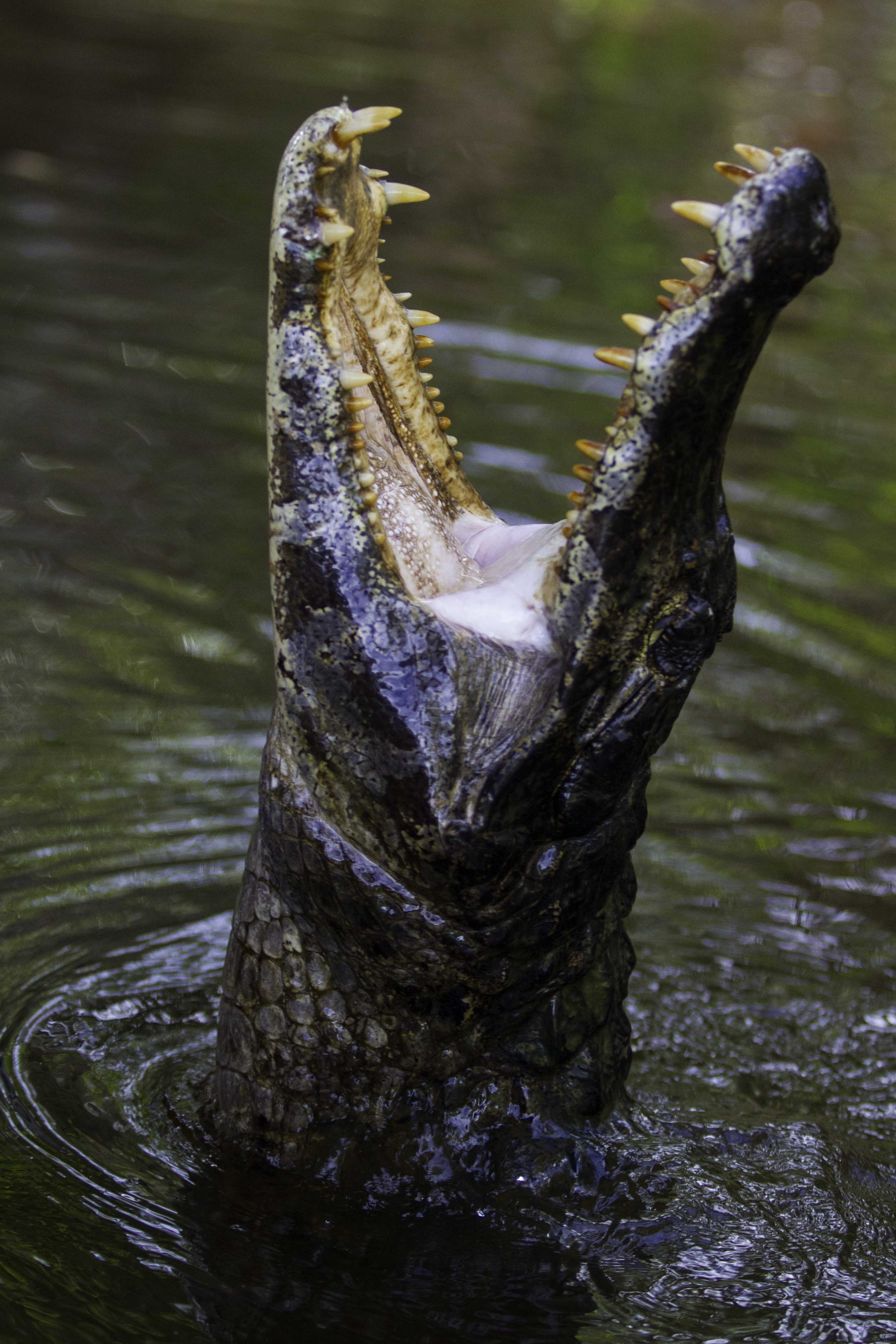 After twenty minutes putting downstream, we had finally reached our destination. My wife, me and four or five tourists disembarked from the boat and waited for Pedro on the shore of the river.  When he emerged from the back, fishing poles filled his arms.  After disembarking, he each handed us a bamboo fishing pole.  Unlike a traditional fishing poles that had a casting system, reel and made out of a lightweight material, these poles were nothing but a stocky bamboo stick with a body’s length of fishing line tied to the end.  Instead of a hook at the end of the line, there was a foot of steel wire that was tied to the end.  Attached to the end of the steel line was the hook.  Pedro explained that they had to do this, otherwise the piranhas would simply bite through the line and take off with the beef bait.  After explaining the fishing poles, Pedro gave us a few hints so we could live to tell our story of our fishing trip without any missing body parts. 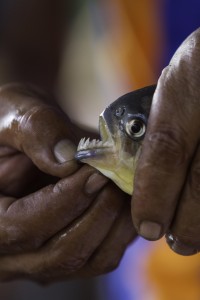 “First of all, when you catch a fish, do not reach into the water to pick it up!  All you need to do is call me over when you have a piranha on your line and I will come to help you out.”

He continued to explain that this was to prevent us from accidentally sticking our finger in the vicinity of the piranha’s mouth and getting our finger bitten off.

“Second, do not go into the water!  If you have any cuts or lesions on your body, the piranhas will attack you.”

Piranhas are attracted to blood and anybody with a cut on their body would be a target for the piranhas to attack.

“Finally, watch out for alligators!”

As we had passed many alligators in the water,  I supposed that it was a possibility that they might watch us from a distance, or try to eat our bait in the water. 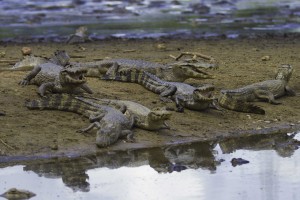 With that, he gave us each a half pound or so of beef that we would use for bait.  After I had strolled upstream about twenty feet from everybody else, I baited my hook by tearing off a small slice of beef off the main chunk that was given to me and flung it into the water.  In what seemed like the same amount of time it takes lightening to strike the ground , the bait was annihilated.  The piranhas had devoured my bait in the same fashion a swarm of killer bees would attack a thief stealing their honey.  Absolutely astonished, I froze in place, amazed.  My eyes semi-bugging out, jaw halfway down I thought, “Glad I’m not their enemy!”  I re-baited my hook and tossed it back in the water a few times, all the while amazed at the ferocity of the piranhas.

In a flick of a switch, a refreshing and much needed zephyr started whiffing across the river and was just enough to make me close my eyes to enjoy it for a minute or two.  I put my fishing pole down and sat on the bank.  My sweat drenched shirt seemed to momentarily evaporate off me.  After a few minutes I had drifted off into a nap.

“Whatever you do, do not turn around.”  My wife cautiously but calmly whispered to me from a few yards away, safely behind a tree along the bank.  Of course, the first thing I did was turn around.  My eyes still blurry from sleep, I quickly surveyed my surroundings and not seeing anything, I turned back around and looked at her, confused.  She then pointed about five feet to the left of me, on the bank of the river.  I warily peeked out of the corner of my eye for a few seconds before meticulously turning my head to my left.  A wave of adrenaline flooded my senses as I sharply gasped.  I tried swallowing but my throat had become as dry as the Sahara Desert on a scorching day.  During some point when I was resting, enjoying the breeze to now, an alligator had somehow slithered out of the water undetected and decided it would be good if he just sat next to me.  After pausing for a few seconds to compose my self, I cautiously stood up, all the time staring at the alligator, making sure it wasn’t going to move.  His emotionless reptilian eyes glared unrelentlessly at me as though he could almost taste my flesh.  He appeared to be staring me down with his dagger-filled grin, beaming in anticipation of his next meal. 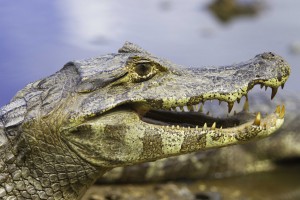 By now my wife had tip toed over to Pedro, careful not to draw the alligator’s attention to herself.  From the corner of my eye, I caught a peep that Pedro noticed what was going on. He chuckled under his breath, took a quick drag off his cigarette and nonchalantly trotted over.  He half-heartedly assured me that the alligators believe we are too big and won’t attack us.  By the look he was radiating, I could tell he must have seen this a hundred times!

“Just start fishing, they will leave you alone.  Don’t worry about it.  You’re fine!”

Still walking towards me, he started to waiving his right hand in a shooing motion and shouting at the beast.  Within seconds, it was gone.

“See!  Nothing to worry about!”

At that, I picked up my rod and started to fish again. This time, keeping my eye on the horizon.

Over the next ten minutes of fishing, that same alligator lifelessly floated back, and decided that it was going to hang out by my side…again.  I thought to myself, “Maybe I’m in his territory and this is his hangout spot. I am intruding on him, or maybe he just wants something to eat!”  I continued fishing, all the while the alligator staring me down with that menacing grin.  After finally landing a piranha, I carefully handled the fish the same way I saw Pedro handling the other fish.  Tediously de-hooking it, I threw the piranha in the direction of the alligator.  To my bemusement, he caught it mid air, took one big bite and swallowed the piranha whole.  He then did something I thought only humans did; he winked at me, almost as if to say thank you for his meal. 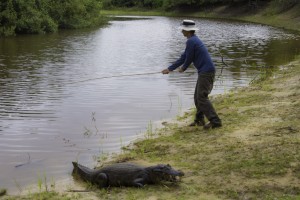 The revitalising breeze ceased as I groaned at the thought of my shirt uncomfortably bonding to my skin.  With the breeze coming to a stop, our group decided that we had had enough for the day and embarked the boat.  I waived to my new friend and spent the next twenty minutes in the boat imagining what might have happened if that alligator decided that he wanted me for his next meal.

How to Write a Bad Travel Story
Tasting Irish Whiskey in Dublin's Jasmine Bar
What would you do? Operation Jericho
To be a Judge of Rio de Janeiro

Tyler Brooks was born and raised in the small town of Bailey, near South Park in Colorado. After his first trip abroad to Japan when he was ten years old, he has had the travel bug and since then, has spent his life planning and going on trips. He recently found his talent as a photographer. His beautiful photography is available for sale at www.ttbphotography.smugmug.com